Barksdale's “Legacy of Light” is best when stuck in the past. 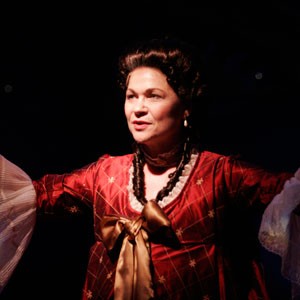 You have to applaud a play that tackles the perpetual struggle of women trying to balance their personal and professional goals.

However, it's a little disappointing that Barksdale's latest production, “Legacy of Light,” makes this struggle seem engaging only when it happened 250 years ago.

As portrayed here by Tamara Johnson, Emilie du ChA›telet was a brilliant 18th century mathematician about whom we would know next to nothing if not for her close relationship with French philosopher and firebrand Voltaire (Larry Cook). As the play opens, Emilie is 42 and pregnant by a new lover, a potential death sentence at the time and an inspiration for her to try and settle affairs both scientific and personal.

Centuries later, contemporary — and fictional — astrophysicist Olivia Brown (Patricia Duran) has just made a major astronomical breakthrough. But it is her contemplation of having a child via surrogate mother Millie (Martha Johnson) that has her life in turmoil. The stories of Olivia and Emilie ultimately intersect in some of the play's most entertaining scenes, in which director Bruce Miller is careful not to overemphasize the magical elements of the plot.

In the 18th-entury scenes, Cook's Voltaire is a droll delight, never better than when battling Emilie's young lover (a forthright Matthew Mitchell) with both wits and swords. Johnson infuses Emilie with a captivating passion that makes some of her character's choices acutely heartbreaking, particularly those related to her daughter Pauline (a radiant Maggie Horan). These scenes bristle with life, the characters all fully three-dimensional — and that includes Emilie's little-seen husband, the Marquis du ChA›telet (Andrew Boothby).

But, while the historical drama is fascinating, the modern-day story never springs to life. It's hard to know whether to fault the actors, including an energetic Ricardo Melendez as Olivia's husband, whose line readings often seem stilted. Or the problem might be playwright Karen Zacarias's script that, for instance, has the Browns and Millie fall into a mutual love fest of admiration after a few short declarations of their aspirations.

While “Legacy” is an entertaining exploration of complex issues, it ends up throwing more light on the past than on the present. S

“Legacy of Light” plays at the Barksdale Theatre at Willow Lawn through March 13. Tickets are $19 - $40 and are available by calling 282-2620 or at http://www.barksdalerichmond.org.