Hitchcock is played for laughs at Swift Creek Mill. 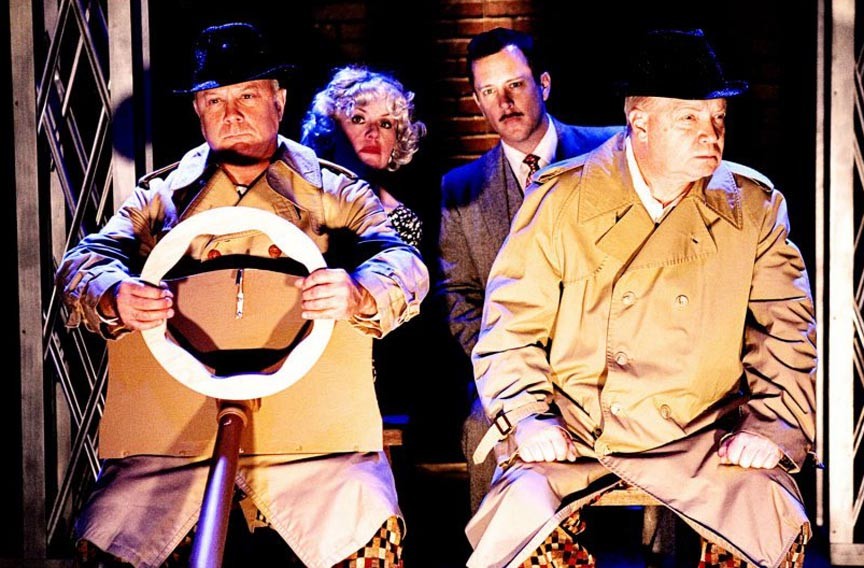 The campy stage adaptation of Alfred Hitchcock’s classic movie “The 39 Steps” has drawn acclaim for recent productions both on and off Broadway. The show takes all of the man-on-the-run spy story tropes and plays them up for maximum comic effect, adding sly references to other Hitchcock masterpieces such as “Rear Window.”

While often clever, the Swift Creek Mill’s production has a certain “throw everything against the wall and see what sticks” feel about it. Luckily, some key components of the production act like glue, keeping the whole enterprise from slipping into confusion.

Chief among them is Dan Stackhouse, who plays Richard Hannay, an average English bloke who gets unexpectedly drawn into an espionage plot during the run-up to World War II. After a mysterious femme fatale (played by K Strong) falls dead in his lap with a knife in her back, Hannay is accused of murder and finds himself pursued by the police. He travels from London to Scotland and back again, crossing paths with a stoic farmer (Frank Creasy), a secretive professor (Steve King) and any number of comic diversions on the way to discovering the elusive secret of “the 39 Steps.”

Creasy, King and Strong work together to portray dozens of supporting characters, which leads to several slapstick bits involving quick costume changes. But more entertaining is the staging of the show’s cinematic scenes. Director Tom Width gets a lot of mileage out of his ingenious replication of a chase atop a moving train as well as the simple act of climbing out of a farmhouse window. He receives invaluable assistance from Joe Doran’s incredible lighting design and the generous use of a fog machine that combine to create moody atmospherics at every turn.

Stackhouse perfectly embodies the stiff gentility of a 1930s-era Brit, making his attempts to remain calm in the face of the craziness even funnier. In their scenes together, the sultry Strong is his perfect foil: Their exaggerated and awkward pantomimes of attraction are among the best moments in the show. Listed in the program simply as “Clown One” and “Clown Two,” Creasy and King are dogged in their pursuit of laughs. They miss their marks almost as often as they hit them, however, their indistinct foreign accents sometimes hampering their valiant efforts.

If you don’t expect precision in the plotting, this slapdash spoof makes for an entertaining diversion and a spry homage to a classic film.