Scott Elmquist A close-up of Kehinde Wiley’s “Rumors of War” at the unveiling Sept. 27 in Times Square.

New York — It’s Friday, Sept. 27, and the sky is Indian summer azure blue. That is, if you look past the gargantuan billboards and pulsating digital signs that define Times Square.

Suddenly, a well-known Richmond artist, Sir James L. Thornhill, dressed this morning in a pinstriped suit, is spotted crossing West 42nd Street. Thornhill isn’t a be-knighted Brit, but a creator of public murals, many featuring historical subjects, that animate Jackson Ward, Battery Park and Church Hill. Today, however, he’s come by Greyhound bus to pay homage to the sculpture that is covered by a dull gray tarpaulin and visible four blocks away at 46th Street. Underneath the wrap a 28-foot-high Kehinde Wiley sculpture, “Rumors of War,” awaits its Broadway debut. The monumental bronze will be displayed in Times Square until Dec. 2, and then find its permanent home on the front lawn of the Virginia Museum of Fine Arts by Dec. 10.

Kehinde Wiley is the celebrated, 42-year-old artist whom the National Portrait Gallery commissioned to paint a presidential portrait of Barack Obama. The native Los Angelino was also given a career retrospective shown in 2016 at the VMFA that brought him to Richmond. There he became intrigued by the city’s trove of monumental statues associated with the Lost Cause. If his boldly rendered paintings capture people of color in grandiose settings and poses-- an approach to portraiture usually associated with academic Western traditions of the 18th and 19th centuries-- his new medium seeks to do the same in bronze.

It’s only 11:30 a.m., but Richmonder Thornhill, whose own name is a shout out to a 17th century English portraitist of the same name who painted in a lush baroque manner, is among the first to arrive for the two o’clock unveiling. “This is going to be great,” he says with unbridled enthusiasm.

The previous evening, museum staff and members of its various boards, some of whom had flown to New York via state airplane, and Richmond officials gathered at the casual and cozy Freeman Restaurant on Lower Manhattan’s East Side for a buffet reception. Among the revelers was Richmond Councilwoman Kimberly Gray, whose 2nd District includes the museum. Recently, she was a force in having the Boulevard renamed in memory of tennis great Arthur Ashe. 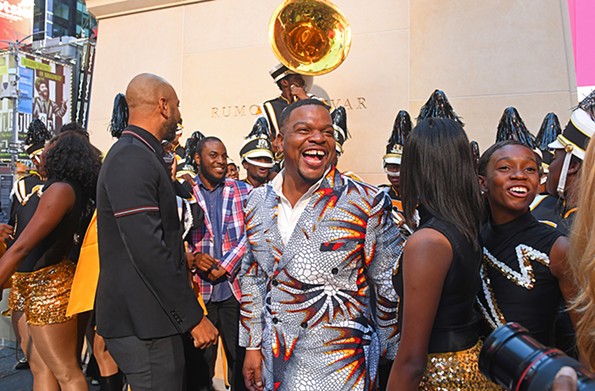 Meanwhile, in midtown on Thursday night, Winnie Perilla Canup, the development director at the St. James’s Children’s Center in the Fan District, arrived in New York to be among the first to view the new sculpture. As she greeted her son and his fiancee who had come from Brooklyn to meet her outside Pennsylvania Station, she said of the Wiley piece: “We will have a new lens through which to process all the historic statues in Richmond.”

By 1:30 p.m. under perfect skies, invitees, art world luminaries, media folks and throngs of the curious were filling the triangular Times Square plaza, where two bronze statues are permanently installed, awaiting the temporary Wiley comrade. One is a likeness of Lt. Col. Francis B. Duffy, a Catholic priest who was a chaplain in the Spanish American War and World War I. The other salutes George M. Cohan, the legendary actor, producer and composer of such standards as “Give My Regards to Broadway.”

A large space on Broadway around the shrouded Wiley sculpture has been roped off by Times Square Arts, the sponsor of the Wiley installation in New York and host of the day’s festivities. The group’s mission is to regularly animate the great crossroads (as if the theater district needs more visual energy) by collaborations with contemporary artists.

Among the mingling guests are Richmond developer and art collector Thomas Papa, a member of the VMFA board of directors. He mentions a concurrent Richmond-connected art event, a show of works in the Chelsea gallery district by Richard Roth, former chairman of the Virginia Commonwealth University painting and printmaking department. Papa is accompanied by Julie Keyes, a prominent art dealer with a gallery in Sag Harbor in the Hamptons. Her deep roots in the art world are connected to abstract expressionist Willem de Kooning, and sculptor John Chamberlain, whose work was collected by Richmond collectors Frances Lewis and her late husband, Sydney. 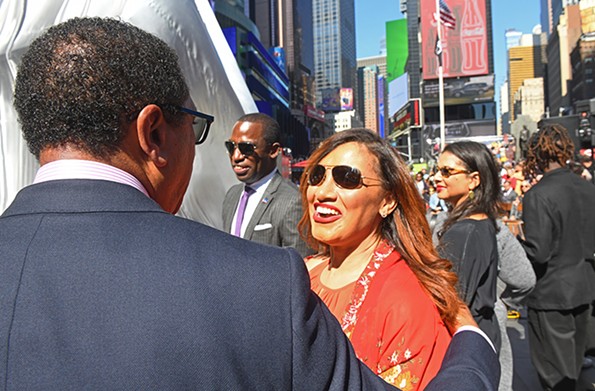 Jan Rothschild, a New York-based communications and marketing executive who works with the Asia Society, saunters by. She is scouting how a future collaboration with Times Square Arts might work in the frenetic space. Her stunning Murano glass pendant draws compliments from all with whom she chats.

Two bars are set up at opposite ends of the temporary Times Square venue where drinks have been placed on ice in large tubs. Edmond Thery Champagne, in thin glass tumblers, and water, in clear plastic cups, are passed.

Among the VMFA officials making the rounds are Michael Taylor, chief curator and deputy director for art and education, and Valerie Cassel Oliver, and curator of modern and contemporary art. James Klaus, co-president and director of the VMFA foundation, makes the rounds. Richmond businessman Keith Kissee, who collects 20th century American art, is chatting with Nancy Brennan Lund, a vice president of Philip Morris; both are former board members of the foundation. Councilwoman Gray is among the most elegantly dressed in a puffy cloud of red-hued crepe and dispenses hugs and air kisses. Striking a tall figure is performer and art collector Kasseem Dean, known to hip-hop fans as Swizz Beatz. Dean and his wife, Alicia Keys, are co-directors of the Gordon Parks Foundation, stewards of the work of the African-American photographer and filmmaker.

It was that kind of crowd.

Suddenly, chitchat about what Wiley has in store under the tarp, and art world gossip, halt as the 20-member band from the Malcolm X Shabazz High School in Newark, N.J., blasts a triumphant fanfare. It is joined by the Platinum Punk Squad of drummers and 12 high-stepping dancers from Malcolm X. All wear black uniforms trimmed lavishly in gold lamé.

Among the speakers is Richmond Mayor Levar Stoney. “Good afternoon New York. … In Richmond we have 10 Confederate monuments to the Lost Cause. That is 10 too many. … We are stronger because of our diversity and inclusivity. It is only fitting that we redefine a future that encompasses all of us. … ‘Rumors of War’ will be our symbolic battle cry, riding boldly into the future. Thank you, Kehinde for being a righteous warrior.”

Thomas Finkelpearl, the New York commissioner of cultural affairs, not to be outdone by Richmond’s acquiring the Wiley, tells the assembled that a statue honoring the late African-American New York Rep. Shirley Chisholm will be installed in Brooklyn. New York State Sen. Brad Hoylman, whose Manhattan district includes Times Square, jokes from the podium that if the mayor of Richmond can address an audience in his district, so could he. He points out that Wiley had painted an official portrait of “the last legitimately elected president of the United States.”

The director of the VMFA, Alex Nyerges speaks movingly of how the acquisition is among the most important the museum has made since the work addresses “the intersection of beauty, power and violence.” He reminds the crowd that the museum acquired its first Wiley in 2006. “Is the new sculpture monumental?” he asks, “Absolutely. It says a black man or woman can be displayed in regal splendor, in the capital of the Confederacy, on a horse.”

Monroe Harris, the president of the museum’s board, who is next to speak, agrees: “The fact that we have a statue of this magnitude will inspire a lot of young people.”

Sean Kelly, the New York gallery owner who handles Wiley’s work tells the audience, which spills onto the surrounding blocks of Times Square, that the work contributes to correcting “a historical imbalance in art history.” He also lauds two Richmonders, Pamela and William Royall, who were unable to attend the unveiling, for shepherding the project: “This would not be happening without them.”

“In these toxic times art can help us transform and give us a sense of purpose. This story begins with my seeing the Confederate monuments [in Richmond]. What does it feel like if you are black and walking beneath this? We come from a beautiful, fractured situation. Let’s take these fractured pieces and put them back together. There are moments when artists have to step in. It’s a call to arms. I’m mad as hell and I don’t want to take it anymore.”

Wiley then recognizes museums and others who have supported his career, and he thanks his mother who was seated in the audience.

Finally, Wiley asks: “Are you ready? Let’s get the party started!”

With this, the musicians and dancers from Newark swing back in action as the gray tarp slides off with a few powerful yanks. There was only light initial applause since the invited audience is viewing “Rumors of War” from the rear. But people immediately circulate and agree that the figure on the horse is triumphant and joyous in spirit.

Freddie Mae Wiley, 72, the artist’s mother, remains seated as she greets well-wishers warmly. “Kehinde was classified in the Los Angeles school system as gifted in art when he was a boy,” she tells a reporter. “Regardless of ‘Rumors of War,’ our God is a god of peace and I pray that he brings together people in peace and harmony.”

“It had to be an art museum to do it,” said Sally Holzgrefe approvingly of the monumental acquisition as she looks on with her husband. The couple lives on Hanover Avenue, not far from the spot on the VMFA grounds where the sculpture will be installed permanently.