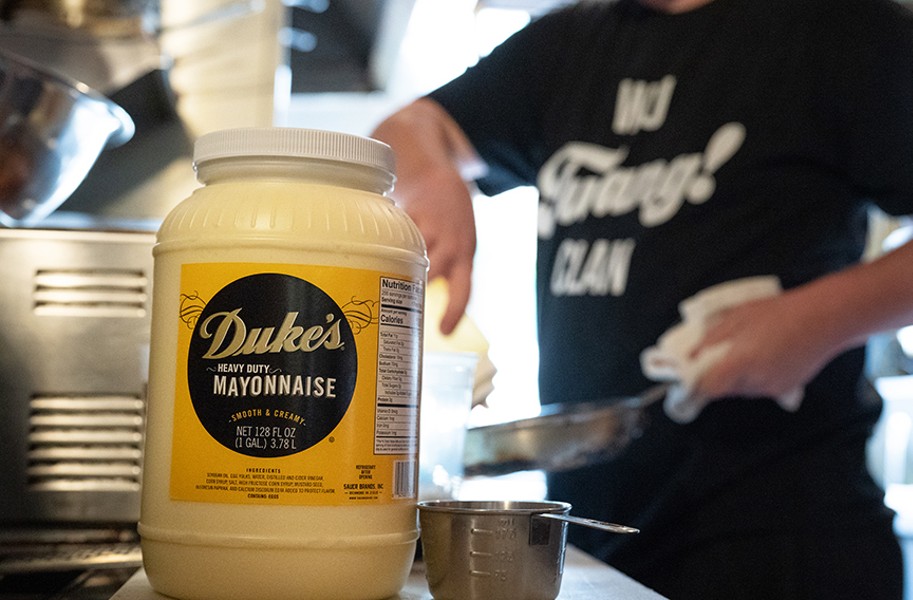 When do you start dreaming about tomato sandwich season?

For native Virginians and those who hail from south of the sweet tea line, the visions of fat, juicy tomatoes and white bread and – perhaps most vividly – those infamous yellow-lidded jars start early, far in advance of the sandwich’s July zenith.

It’s almost Pavlovian, the way in which we start instantly salivating at the mere mention of Duke’s. The century-old, South-Carolina-born mayonnaise brand is Southern to its core, synonymous with tomato season, with homemade pimento cheese and with Virginia country ham.

Duke’s Mayonnaise has long been the condiment of choice for both home cooks and top chefs, a “challenger” brand that is much smaller, much more intimate than its ubiquitous counterpart, Hellman’s.

“It’s one of the most iconic brands of the South,” says Dustin Artz, co-owner of Richmond-based ad agency Familiar Creatures. “You can't get rid of that. The fun is, how do you make the love for this brand spread in a natural way?”

Familiar Creatures recently became the account’s agency of record, which Duke’s brand director Rebecca Lupesco is particularly excited about. “I’ve been following Familiar Creatures since they started,” Lupesco says. “We talked to other agencies, but they really won our hearts and minds.”

Duke’s is owned by Richmond-based Sauer Brands Inc., which follows the C.F. Sauer Co., founded in River City in 1887. Lupesco’s office is within spitting distance of Familiar Creatures headquarters, which means they can closely collaborate on the brand’s ongoing campaign, “It’s got twang!,” as well as upcoming, locally based events.

“When you aren’t the biggest, you have to try harder to cut through, to have better, more provocative messaging and know your quality just has to be higher,” Artz says.

The history of a Southern brand

Duke’s has always been small and scrappy.

In 1917, Eugenia Thomas Slade Duke of Greenville, South Carolina, started making sandwiches to help with the war effort, serving the infantryman stationed at nearby Camp Sevier.

In 1923, Eugenia, a quick study in the world of startups, realized that it was her mayonnaise, not her sandwiches, that had her customers rapt. She launched a distribution arm of her fledgling company and by 1929 the Duke’s brand was large enough and successful enough to sell to C.F. Sauer. Eugenia stayed on as the mayo spokeswoman.

“Duke’s and their story remind us of Richmond, a grassroots culinary destination with a vibrant restaurant scene,” Artz says.

Lupesco and Artz must maintain a fine balance of preserving the lore of Duke’s while bringing the brand full-force into the 21st century. Lupesco explains that the current campaign, “It’s got twang!” is the “embodiment of the Southerness of our brand, the tanginess of our product.”

While we may most readily associate the American South with saccharine delights (both edible and otherwise) “that little Southern something” that makes Duke’s special is actually its lack of sugar. “We’re the only major mayo brand that doesn’t use sugar,” Lupesco says. “That’s why chefs love Duke’s, we aren’t putting in any sweetness to mask other flavors.”

In addition to fun merchandise – who doesn’t want a “twang!” T-shirt? – Artz says they’re weaving the campaign into all social media platforms and into Richmond restaurants themselves.

“We don’t always have a direct relationship with the customer, especially mom-and-pop shops and those restaurants on the smaller side,” says Lupesco, who explains that many establishments order their gargantuan Duke’s jars and yellow mayo packets through large distributors like U.S. Foods.

To connect with restaurants on the ground level, Lupesco and Artz plan to hold “surprise and delight visits.” On Monday May 24, Duke’s will pop up at Hatch Kitchen to do a product demonstration and giveaway, livestreaming the event on Duke’s social platforms so anyone can tune in.

“We want to make sure we give love to a lot of concepts,” Lupesco says. “I think we will hopefully continue this relationship with Hatch, which will allow us to follow these restaurants and support them as they grow.”

Another facet of the brand’s ongoing campaign will be the creation of a video series highlighting the “best chefs with the best stories to show people what it looks like in the kitchen when you’re using Duke’s,” Artz says.

In addition to showing the layman the credibility of Duke’s – if it’s good enough for James Beard award-winning pastry chef Dolester Miles, it’s probably good enough for you – this series will work to elevate small businesses and the gritty chefs behind them.

Crafted by a humble Southern woman during a time when women didn’t even hold the right to vote, the ethos of Duke’s goes beyond tangy fun.

“You want to root for them,” Artz says of the brand. “As we grow the chef series, hopefully we will uncover just how food culture is changing and also the history of food culture in the South, and the role Duke’s plays in that.”

In addition to unearthing forsaken culinary tales and amplifying the voices of chefs who make their communities whole, the Duke’s brand is also hoping to expand its reach beyond its Southern fan base, though it’s certainly grateful for its homegrown mayo devotees.

“The Duke’s love in this area is off the charts,” Artz says. “Our job as an agency is to fuel that, to harness that and make people love the brand even more, if that’s possible.”

Within the past few months, Duke’s found its way into the heart and home of pandemic-born Instagram influencer Dan Pelosi: You may recognize his handle, @grossypelosi. The Brooklyn-based fashion director who’s been covered by the New York Times went viral in 2020 when he started posting his spin on his family’s classic Italian dishes.

“We saw him using Hellman’s in a post and reached out and asked him to try Duke’s,” Lupesco says. “And it worked! He’ll actually be doing a tomato toast for us later this month.”

Looking to get your Duke’s fix while out on the town? Check out the offerings at these local spots: