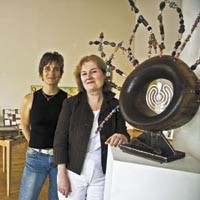 Give young artists a taste of success and they could go one of two ways: Mozart or Danny Bonaduce. But that's no reason not to try, which is what Sabot at Stony Point School is doing at June's First Friday on Broad Street.

Sabot is holding a show of art by its pupils, from kindergarten to eighth grade, in a gallery space at 315 W. Broad St. But before you shut down with images of refrigerator art and macaroni portraiture, consider this: Last year the children's auctioned pieces raised more than $10,000 for the school. The secret is in the collaboration. Pupils and teachers work together to produce works that, just maybe, will stand proudly against the other shows on Broad's gallery gauntlet.

Sabot, a private school for kids in prekindergarten to eighth grade, focuses on the co-construction process. Cheri Wolff, the school's head of art, says the collaborative methods emphasize learning through shared experience. The children work with each other as well as different role models — parents, local artists and musicians. The art comes together from many sources.

“This is not your standard children's art work,” Wolff says. “The community needs to know what these kids are doing.”

Bringing the creative endeavors to the Richmond public has been a goal for Sabot for the last four years. Irene Carney, Sabot's executive director, thinks it's about time.

“We see the children having tremendous wonder and pride at seeing their work incorporated into something larger, including parents they know and care about and other artists they are just meeting,” Carney says. “It's a wonderful elevation of their work.”

Artist, mother and former Sabot preschool teacher Heidi Field-Alvarez helped create a quilt with the pupils: younger children worked on medallions that hung off the quilt while the older kids used fabric paint to draw on the quilt. Field-Alvarez and other parents then applied the artwork and completed the embroidery.

“A lot of planning goes into [the piece] to make it look like a beautiful finished quilt but without my hand on it so much,” Field-Alvarez says. “I think it's paying attention to [the children's] age level and what they are capable of.”
Wolff says some of the pieces are obviously done by children, but other works aren't so amateur. She's seen adults express disbelief that kids created some of the art.

“I think it's hard for people to believe a child could do that,” Wolff says. “If items are laid out in front of them they can do some amazing stuff. I think for the most part in a very traditional environment they are not given that freedom.”  — Veronica Garabelli