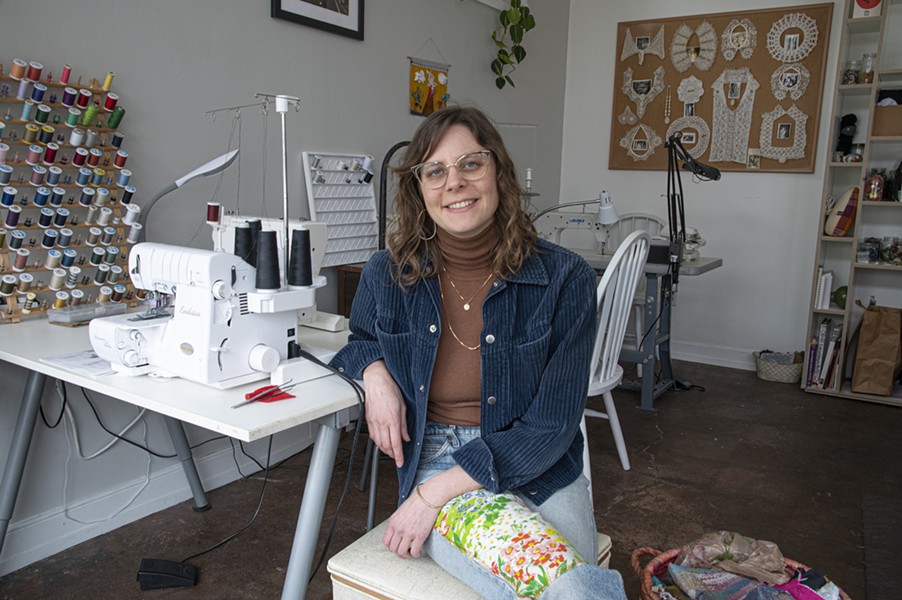 At 11 years old, Lisa Hutchinson learned to sew from her mother, a home economics teacher. Her interest eventually grew into a business, TopStitch Mending, where she repairs clothing as a way to minimize the environmental impact by keeping used clothes out of landfills.

Pre-pandemic, she taught sewing classes at the Visual Arts Center and Studio Two Three, which she hopes to return to one day, she says. When all her business went away and lessons became impossible in 2020, Hutchinson changed her priorities.

“I experimented with making masks after a friend at Patient First said they couldn’t get [them],” she recalls. “We finished over 650 masks but didn’t charge for them. People could donate and that’s how we’re still here.”

Hutchinson sees the art of sewing as a powerful tool.

“It’s a way to enable yourself to enter new worlds and create connections between yourself and what it means to be human,” she explains. “It’s also a meditative practice you can enjoy alone or with other people.”

Over the years, she has seen people react to the power of sewing as if it’s magic, especially when she posts before-and-after shots. “The secret is anyone can do it if they apply the time,” she says. “All you need is two hands, a needle and thread.”

Beyond the enjoyment of the skill set, she’d like to see people take a different approach to “fast fashion,” which is tied to the complicated clothing chain and its many injustices, including marginalized communities affected through working at and living near clothing factories. Mending gives clothing many lives.

Hutchinson's commitment to sustainability extends to not throwing away any fabric scraps; instead she does mending using scraps from past projects. “Visible mending is a way of decorating clothing as it’s being repaired, an embellishment, instead of an invisible repair” she says. “Rather than seeing a visible repair as a flaw, it’s just another perspective. You can look at it as a part of the story of the clothing, not an eyesore.

“And maybe we can apply that to ourselves and our community,” she adds.