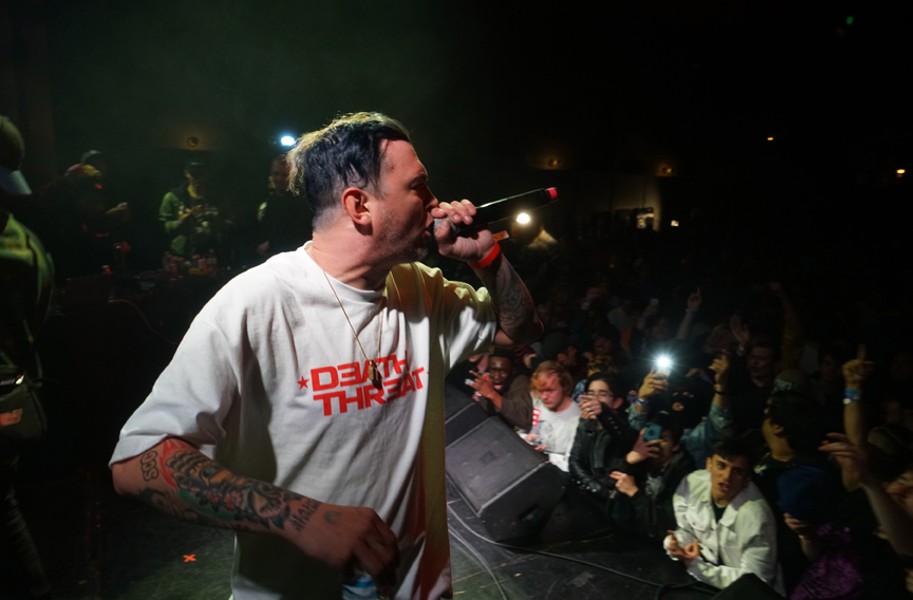 Adam Degross Known for his brutal and dark hip-hop, rapper Lil Ugly Mane started in Richmond and has since earned millions of YouTube views and moved to Los Angeles. He’s returning for a major homecoming show joined by several of the area’s finest.

The lights at Grace Street's favorite alternative venue, Strange Matter, grow dim as the house music cuts off. Richmond native Travis Miller, better known as Lil Ugly Mane, creeps up on stage and curls his fingers around a microphone. It's not long before the beat kicks in and the crowd is chanting "got me fucked up" as he performs one of his more famous tracks in a one-off performance ahead of his May 13 show at the Broadberry.

Miller is one of those musical creative people born in basements. I'd have to take my shoes off to count the number of monikers he's performed under, most involving brutal noise that kept a beat long enough to get drunk college kids jumping, myself among them.

When it started in the late 2000s, he was lighting up one of the better-known house show venues in town, the Church of Crystal Light. The space was as grimy as any other unfinished Jackson Ward row house, but the tunes he and friends Jonathan Coward, Brian Blomerth and Leo Heinzel were creating helped define an era in Richmond's music scene.

It didn't take long for that success to overflow as the Church of Crystal Light grew too big for its basement and the collective moved to a gallery a few blocks down the road.

"It wasn't official, we got no licensing or anything, which is probably why we got shut down," says Miller in a phone interview with Style Weekly. He joked the last time Style wrote about him was when the gallery opened six years ago and the attention the space garnered from the story might have led to its downfall. But he can laugh now, looking back and reminiscing about squatting in the apartment above the gallery, living day-to-day. That's because he's light years away from that existence now, producing music full-time in Los Angeles when he's not visiting family in Richmond.

With millions of YouTube streams under his belt, Miller's Lil Ugly Mane project found a sound that was way ahead of its time. The pounding rhythms make way for his gravelly vocals while synthesized bleeps and bloops accent the often droning samples he'll loop into the background. Rooted in the Memphis rap scene, ghastly horror-core and gangsta rap, Lil Ugly Mane is not for the faint of heart. Maybe it's the lyrics — probably not suitable to publish here — or maybe it's the beats. He's a talented producer who knows how to create some haunting sounds. Whatever it is, it's infectious.

"It's moved a lot in different directions since it started," he says of the project.

It's been three years since he dropped "Oblivion Access," a consistently dark and brooding record that offered an anthem for a post-recession generation that had as much trouble finding jobs as it did graduating in the first place.

But success came fast and hard and Miller (and Richmond) suffered because of it. As his audience grew, his fear of how his words were being interpreted and what people might think of him as a person, grew too. Sunday will be Miller's first live show in Richmond under the Lil Ugly Mane name, something he's looking forward to but also dreaded for years.

"Richmond is a small town, you know everyone here if you've lived here as long as I have," he says. "The idea of getting myself to a place where I was playing for people in town who didn't know me, my anxiety just kept me back."

But that night last week at Strange Matter showed a man ready for the world — or at least the Broadberry. And Sunday's show won't just be about Miller; fellow Richmond rap god Nickelus F. will be celebrating the release of his newest record, "Stuck," which drops the same day. Brian Blomerth will return to Richmond from New York to perform as the freaky electronic side-show Narwhalz (of Sound) and locals Division of Mind will offer up its own brand of terror-infused hardcore punk. There are sure to be other surprises as well.

Make sure you snag tickets at richmondshows.com ahead of Sunday's show: It's going to sell out fast. S