Some of our favorite watering holes and what makes them special.

By Rich Griset and Brent Baldwin 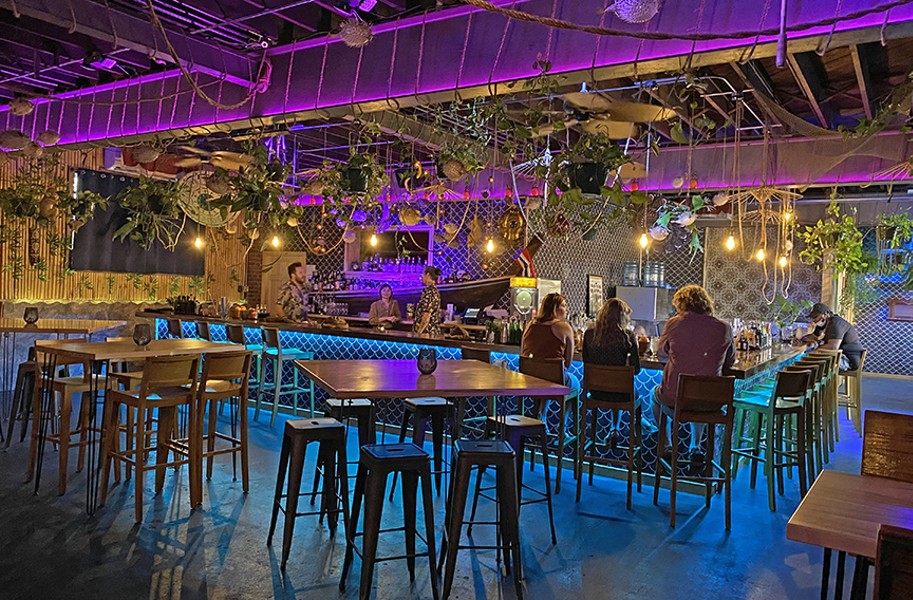 After years of fiddling around with various incarnations of a speak-easy, hip Thai street food restaurant Sabai finally settled in late 2019 on the Jungle Room, an updated take on the Tiki bars of yore.

Decorated with a jungle theme – including so many house plants it’s a miracle it can water them all – this club serves up an extensive list of classic Tiki cocktails and original libations. Featuring live DJs and lit with violet light, the Jungle Room is a fun place to see and be seen, though you wonder if the Polynesian styling could raise concerns over cultural appropriation.

The cocktail list is heavenly, including “…for the Birds,” a concoction that marries gin, egg white and other ingredients in a Nick and Nora glass. – R.G. 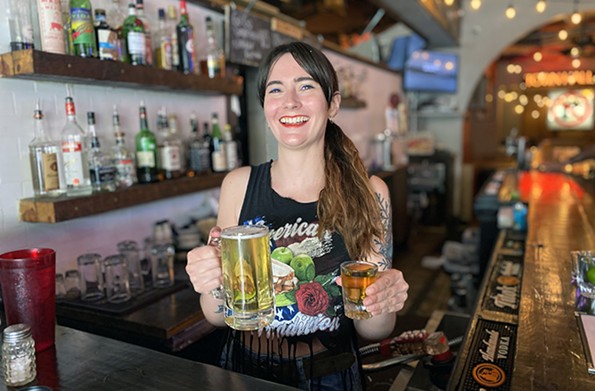 Setting up shop in the old Weezie’s Kitchen spot, Town Hall is attempting to bring a honky-tonk experience to the heart of Carytown. Opened last summer by Belmont Food Shop owner Mike Yavorsky, Town Hall’s biggest attraction is the jukebox filled with old country tunes at the front of the bar. Set for unlimited play, patrons can listen to George Strait and Dolly Parton to their hearts’ content while sipping a Pabst Blue Ribbon.

The rotating menu has included items as varied as jerk goat shank, coq au vin, and fried quail and waffles. But if you’re just in need of a snack and a quick pick-me-up, the Adult Happy Meal consists of a beer, a shot and some tater tots for $10. – R.G. 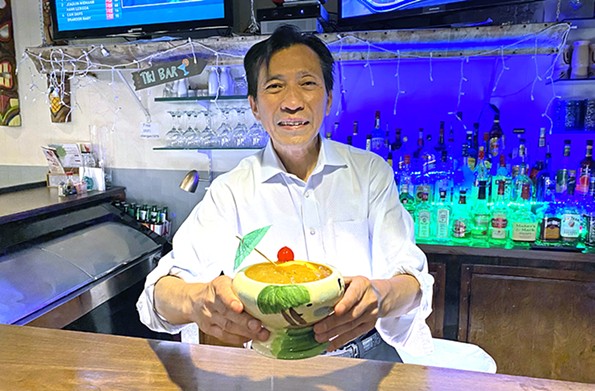 Richmond has seen an explosion of both upscale American Chinese restaurants and bars that serve Tiki drinks in recent years, but Tiki-Tiki remains an old school classic in both realms.

Located down Patterson Avenue headed towards Goochland, Tiki-Tiki appears to have barely changed since it was founded in 1976. With its festive, slightly rundown interior and massive menu of American Chinese and Polynesian classics, a trip to Tiki-Tiki feels like a step back in time.

While the pu-pu platter is a great smorgasbord for a snack – and even includes a tiny grill so you can char your chicken skewers – the real stars here are the Tiki drinks. Mike, our man behind the bar, effortlessly throws together everything from Tiki classics like Mai Tais to lesser-known libations like the Doctor Funk of Tahiti.

We’re talking scorpions, zombies, fog cutters and navy grogs for $8.25 a pop – roughly half what some trendy cocktail spot in the city would charge. If you’re on a date, get the volcano, a flaming rum drink for two served in a special cocktail receptacle. – R.G. 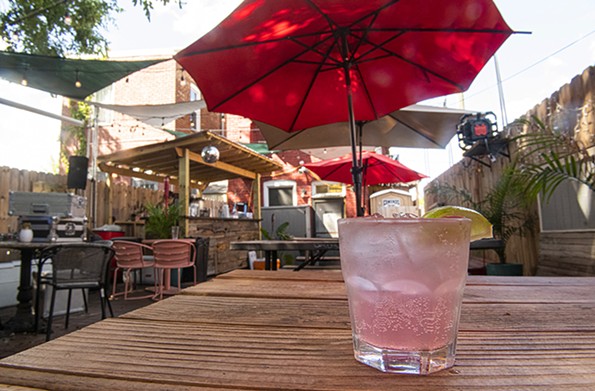 Located in the heart of Carver, Cobra Cabana is a chill spot.

It serves popular food items from the Snake Plissken burger to Cluck Norris brined chicken wings, with some nice veggie options, while playing an eclectic mix of music and occasionally holding live shows outside by the likes of Kool Keith. More importantly, it’s welcoming to everyone and doesn’t have a pretentious bone in its body – what else would you expect from a restaurant and bar co-founded by Herbie Abernathy, the red-bearded wild man also known as Valient Himself, lead singer from the hard rockers Valient Thorr who once toured with Motorhead?

What I really love is the extended outdoor patio behind the restaurant: The cozy, fenced-in, brick patio area featuring a Tiki-styled bar as well as “the cleanest Porta-Potty on the Eastern Seaboard” tucked near the side street entrance. “We’re always having events, DJ nights, it’s always evolving,” says co-owner Josh Novicki, adding that it also plays host to private parties. “The best thing to do is check our Instagram and Facebook [for events].”

After working up a sweat walking around the river, we stopped by the patio and had a refreshing summer drink – or a few – that hit the spot: It was Cobra’s Patio Paloma, basically Cazadores tequila, pink grapefruit juice and a little soda water, which is so popular that it keeps it on tap. Drinking it on a blazing hot day while sitting under an oddly compelling “dumpster-find” portrait of eerie monkeys while Lemmy croons “Love Me Like a Reptile” makes for a pretty decent afternoon. The bar also carries my favorite summer lager of late: If beer is more your summer jam, you can toss back affordable bottles of Lone Star from Texas for some instant armadillo blues.

I’d have to say that, for me, this slightly sweet, slightly bitter post-pandemic summer of 2021 has been all about that Lone Star-Paloma combo. It reminds me of some roasted summers of my 20s when a chilled shot of Hornitos and Pacifico bottle, the $5 special at Duffy’s Tavern in Chico, California, kept me quenched through the most brutally hot days. 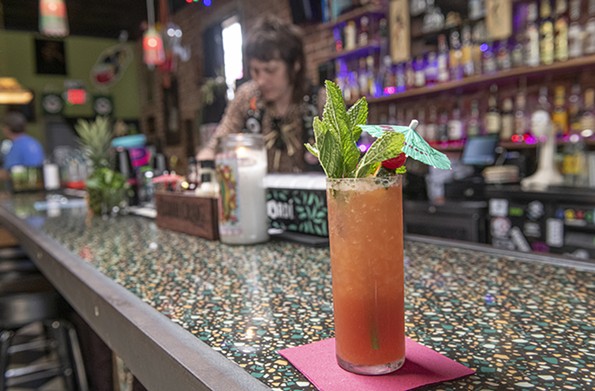 When musicians from a cool band open up a bar, does that automatically mean the bar will be awesome? Probably not, but in this case it does.

Around two years ago, Fuzzy Cactus opened in the North Side neighborhood of Brookland Park with its classic garage punk vibe, meaning you’ve got a Comet pinball machine, a nicely curated jukebox with bands as varied as the Misfits, the Troggs and Buck Owens, red vinyl-covered seating and a glittery concert stage in back with disco ball next to a pool table that sits beneath posters of Roky Erickson, Van Halen and a framed black velvet portrait of Kenny Rogers. And that’s before you even notice the macramé owl wall art or brown shag carpet upholstery of the bar.

“The concept was rock ’n’ roll bar, mid-’60s to mid-’70s, the lowbrow mixed with affordable, creative drinks,” says bar manager Paul Kirk, who previously worked at Rappahannock Restaurant for five years. Kirk helped kick-start Fuzzy with married co-owners Michael Cipollone and Patty Conway, who are expecting their first child soon. Congrats! All three of them have done time in rock bands, with Kirk and Cipollone having played in Cruzer and more currently, Mel Machete. “Basically, if you want a great classic cocktail, there’s no scoffing here,” Kirk adds. “We’re taking those classic concepts, adding a divier aspect and making it all more accessible.”

Tuesday happy hours have been busy; that’s the night it does home-style tacos plus $3 mugs of Modelo all day. Check out the Zombie Bird cocktail ($12) – a riff on the classic Zombie cocktail and Jungle Bird, using house-made cinnamon syrup and plenty of rum and Campari. Fuzzy has gotten through the pandemic by bringing in a steady dinner crowd, but the indoor concerts – featuring great up-and-coming, mostly rock bands, both local and touring – should be slowly gearing back up this summer into fall. “We want people to keep coming for the dinner hours, the shows won’t start until 9 or 10 p.m.,” Kirk says.

Cipollone also gives a shout-out to landlord Corey Weiner and CW Performance Group, who he says have been great to work with: “We had a budget to work with him, he let us do whatever we want – and he continues to come in and support us. You couldn’t ask for more.”

Currently Fuzzy is closed Mondays while opening at 5 p.m. Tuesdays through Fridays. It also serves brunch from 11 a.m. to 4 p.m. on weekends. The bar stays open until midnight on most weekdays, except for Fridays and Saturdays, when Fuzzy stays open until 2 a.m. and on Sundays until 10 p.m. – B.B.