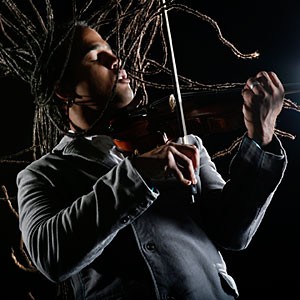 So when he says his composition “Dancers, Dreamers and Presidents” is “very conservative in some ways,” let's be clear: It's not Brahms.

The piece, which will be performed by Richmond Symphony this weekend, originates from a moment in 2007 when then-Sen. Barack Obama danced with Ellen DeGeneres as a guest on her show. The idea of a mixed-race heterosexual man dancing with a white lesbian woman on national television strikes Roumain as an extraordinarily relevant moment.

“I was interested in ... how it resonated for me as a person and artist,” says Roumain, who is Haitian-American. “It served as an impetus for a musical portrait.”

Conservative in structure and programmatic in concept, the three-movement work, which includes drum kit and synthesizer, begins as “an extension of whatever dance they were doing,” Roumain explains. “Then it gets more complicated, as any conversation gets more complicated, but still very danceable. In the end, it's reflective, open and accessible.”

“Dancers, Dreamers and Presidents” is the result of a commission from the Sphinx Organization, which oversees multiple programs dedicated to increasing the participation of blacks and Latinos in the classical music world. The Richmond Symphony is one of a nine-member consortium that supports the commissioning project. Concerts featuring last year's commission by Roberto Sierra were canceled because of inclement weather.

As an artist, there are times Roumain doesn't want to be aware of his race, and says there are times he isn't. “When I'm composing, creating, performing, I'm not even aware of my own humanity,” he says. “It's like prayer, it's like dreaming, like sleeping.”

Yet the lack of diversity of classical composers, performers and audience members isn't a dream. “There are a lot of great composers who happen to be composers of color or happen to be women,” he says, “and they're not getting their music played. They're not.”

He says the problem isn't as simple as prejudice or discrimination, but is related to calcified notions, especially at the administrative levels of orchestras, about tradition, convention and standards of quality.

To serve their communities, orchestras must reflect the whole community, Roumain says. “I'm always kind of frustrated by the lack of really varied, vibrant orchestral music by varied and vibrant people,” he says. “The only thing I can do is to be vocal about it when I get a chance.”

And he is vocal. “You caught me in a mood,” he says, describing his ideas for changes that he says would be simple, inexpensive and effective in transforming the concert experience: Don't warm up and tune onstage. Put the winds and brass on risers. Get rid of the unattractive lighting (“Money invested in a lighting designer would pay itself back,” he says. “Last time I checked, light doesn't affect sound”). Have all the musicians go to the lobby to shake hands after the concert.

In short, orchestras need better production values. “I know it's a dirty term. Call it customer service.” Roumain says. “It's very simple, and that's what I love about the music industry. It caters to an audience.”

At one point in the conversation, Roumain pauses. “I don't know,” he says. “Maybe this is career suicide.”

Then he keeps talking about change. S

The Richmond Symphony performs “Dancers, Dreamers and Presidents” at Richmond CenterStage on March 5 at 8 p.m. and March 6 at 3 p.m. Also on the program is Tchaikovsky's Symphony No. 6, “PathActique,” and Tomasi's Concerto for trumpet with soloist Tom Hooten, principal trumpeter of the Atlanta Symphony. Two of the symphony's youth orchestras will perform an hour before each concert. Tickets are $12 to $72. Go to richmondsymphony.com or call 800-982-2787.