Lights in the Dark

InLight 2020 socially distances around the city to explore themes of safety and accountability. 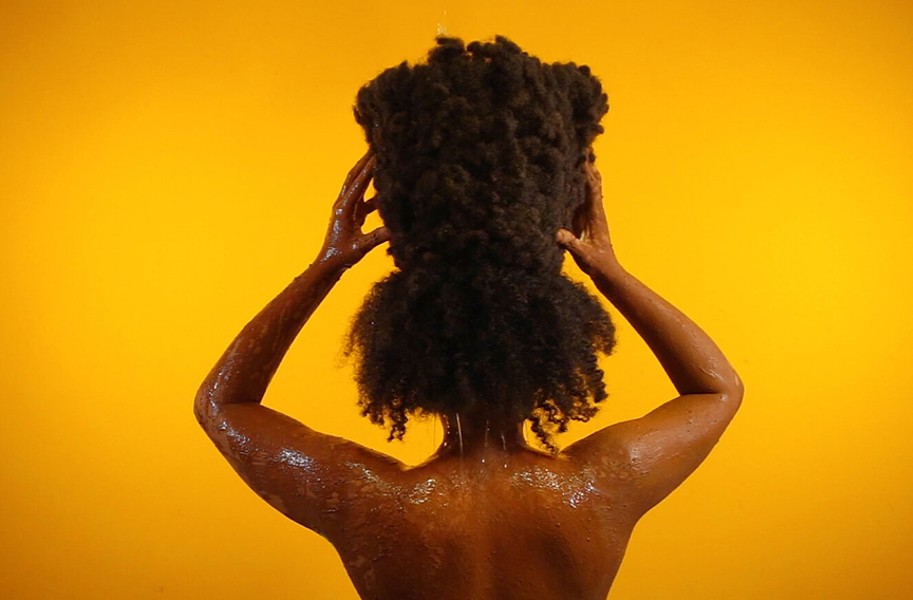 Artist Stephanie J. Woods’ “the wait of it” is a five-channel installation and photography series featuring “moving audio photographs” and nine years of detangled hair formed into a loosely woven vessel.

When artist Stephanie J. Woods moved back to Richmond in July after being away for two years, she was determined to immerse herself into the community while doing something creative. She decided to accomplish both by participating in InLight this year.

1708 Gallery’s 13th InLight, a public exhibition of contemporary light-based art, takes place Nov. 12 - 15 at sites across the city and, considering the altered reality that is 2020, features the paired themes of safety and accountability.

In past years the themes were informed by the site, as with last year’s histories of Chimborazo Park. Without a central location this fall, 1708 Gallery looked elsewhere for inspiration. This year’s themes were inspired by the mutual aid and support that the city has seen in response to the pandemic and the racial justice movement.

“We explored some alternative formats like a ticketed event but ultimately decided that it would be pretty powerful to take InLight into the community,” she says.

Myriad concessions and changes were considered due to the pandemic, but Smith says organizers saw them as opportunities. Deciding it was irresponsible to plan an event that historically drew nearly 12,000 visitors each night, they quickly moved away from large-draw elements. Instead, they focused on a vision for a citywide exhibition on view for a longer time at multiple sites. These include the Edgehill-Chamberlayne neighborhood, Oakwood Arts in Church Hill, the Anderson Gallery, the downtown arts district, in and around Browns Island, and the Randolph Community Center. Additionally, there will be a series of projects on a virtual platform.

The typical attendance for InLight is about 20,000 people over two nights.

“I imagine that this year we’ll see a drop, but I hope between the ability to view the works over four nights and the virtual platform for those who prefer to stay home, that folks have ample opportunity to experience and enjoy InLight,” Smith says.

The work Woods created for InLight is titled “The Wait of It,” a play on words that speaks to her years spent growing and collecting hair as well as the psychological weight of being Black in America and the politicization of African American hair. The piece is a five-channel rear projection featuring moving audio photographs.

“I call them moving photographs because they’re essentially videos capturing me in a still position almost like a statue, while everything else around me is moving,” she says, adding that the work is very subtle. “So if you don’t look closely, you’re likely to overlook the most important part.”

In the video, her body is covered in red clay that was hand-harvested by her husband from his hometown of Winston-Salem, North Carolina. She has a woven vessel sitting on her head that was made from her hair, collected over nine years. Accompanying the work is the poem “Bleached” by Laura Neal and an original score by artist Johannes Barfield featuring the sounds of fire and water. Via email, she told Style that she “was inspired by the 2020 Minneapolis ‘riots’ and the Martin Luther King, Jr. quote: ‘We have fought hard and long for integration, as I believe we should have, and I know that we will win. But I’ve come to believe we’re integrating into a burning house.’”

With the juried call and curatorial selections, InLight’s organizers were looking for new artists and proposals that considered their themes in ways that were intentional and relevant for InLight. But they were most interested in supporting Richmond artists. “The selected works consider issues of infrastructure and policy, the environment, self-care, identity and more,” Smith says. “Many of them have a specificity that is important to Richmond.”

For the thousands of people who consider InLight an essential part of Richmond’s fall arts calendar, the event feels more important than ever this year. Smith admits she’s grateful for the whole host of circumstances that have allowed the gallery to produce InLight, from the board’s support to the team’s creativity.

It’s obvious to Smith that as we head into a dark and unsettling winter, public art is more important than ever.

“It’s been so apparent across these past months that the arts play an important role in providing comfort and entertainment, in fostering connection,” she says. “And in shaping a narrative about our community and whose stories get lifted up and celebrated.”

As for why the city has embraced InLight so enthusiastically, Woods can only note that, having attended the event in the past, it had a lasting effect on her.

“I guess it has had a lasting effect on others as well,” she says.

InLight 2020: Safety and Accountability will be held Thursday, Nov. 12, through Sunday, Nov. 15, at various sites around Richmond. Visit 1708inlight.org.