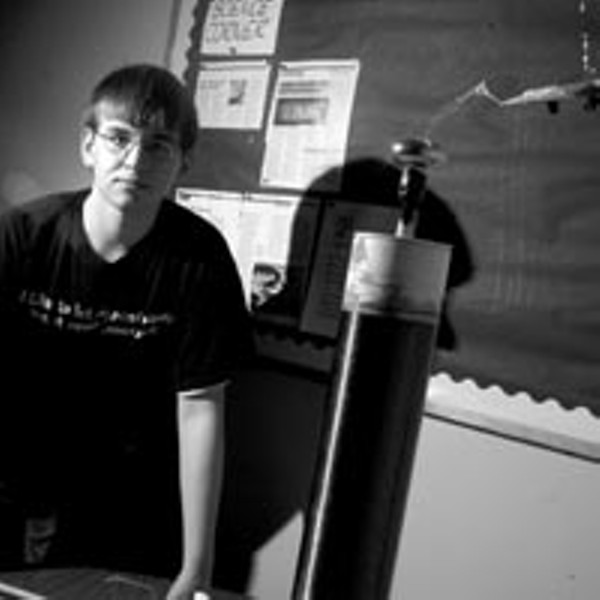 This is more than an experiment for Munroe, 17, a senior at Brook Road Academy at St. Joseph's Villa in Henrico County. He's the first and only advanced-physics student in the alternative school's five-year history. And he's spent $200 and more than 100 hours constructing the copper coil for his senior physics project. If it works, it will sizzle in seconds.

Most of school's 47 students and seven teachers have gathered to watch. Munroe wears baggy jeans and a black T-shirt that reads, "I like to let my mind wander but it never comes back." In an even-pitched and confident voice, he informs his audience of the coil's origins, citing a brief biology of its inventor, the Serbian-American scientist Nikola Tesla, born in 1856.

At 28, Tesla sailed from Europe to the United States, landing in New York with only 4 cents, Munroe says. After working for Thomas Edison and George Westinghouse, Tesla set up his own laboratory, experimenting with electricity, motors and alternating current. He invented the Tesla coil in 1891, essentially the first instance in which man demonstrated the wireless transmission of electrical power. One of his coil towers created such a surge it caused a blackout in New York City and emitted a boom heard up to 20 miles away. By all accounts an eccentric, Tesla died a pauper in 1943.

While many considered Tesla's theories crazy, the coils remain important today. Munroe's physics teacher, Dan Hansen, cites an example of Tesla's modern-day use, "lightning on demand." It's basically Munroe's project on a much grander scale and with practical application. Hansen says researchers involved in a government project in Utah are using Tesla coils to study how lightning works when it strikes airplanes.

Today the eyes are on Munroe. "This project is all Ricky," Hansen says, beaming. "He's so engrossed it's unbelievable."

Everyone appears anxious to see how lightning can happen inside. Two large windows are covered with black plastic trash bags to keep the room truly dark. The cylindrical-shaped coil — about 30 inches tall — rests on a table at the front of the room, looking impressive and a bit ominous. Its guts include PVC pipe, a transformer, varnish, mineral spirits, wood, plastic and more than 1,100 feet of thin copper wire that Munroe spent five hours winding around the plastic pipe.

In one hand Munroe holds a Philips-head screwdriver tethered to some rubber-covered wire. He calls for a classmate to cut the lights. He pulls a tiny chain resembling one that turns on a lamp. All of a sudden the room buzzes as if a thousand bug zappers zapped at once. And in the mini, man-made atmosphere, lightning strikes.

A brass doorknob atop the coil acts like a lone tree in an electrical storm. Capillary-sized blue light sparks from the knob, into the air and then snakes horizontally toward a dangling tiny model airplane. The room fills with "ohs" "ahs" and "wows" until, seconds later, lights come on and applause erupts.

The wall outlet Monroe uses for power can carry 120 volts of electricity. But with the help of a transformer, he says, 7,500 volts have just passed through the coil.

Munroe repeats the show, then fields questions from curious students. The funny stale smell? It comes from air vaporizing. In addition to scientific experiments and research, Munroe adds, Tesla coils have been used to create special effects in everything from movies — such as "Terminator II" — to Grateful Dead and Phish concerts.

Munroe graduates from Brook Road Academy at the end of the school year. He'll pursue an academic and career path in either science or psychology, he says. Whatever happens, his Tesla coil that came to life in Frankenstein style first in his parents' garage and then at school will find its place, he says. It might even wind up as a hood ornament for his car, he muses.

After the demonstration, many students linger to ask more questions. One student tells Munroe he plans to build two Tesla coils for his science project next year. Like Munroe, he hopes to become an advanced physics student — the school's second. The younger student sees Munroe as a mentor, hovering about him in shared delight. And in a classroom on a drizzly Tuesday, man-made sparks seem to make sense. S