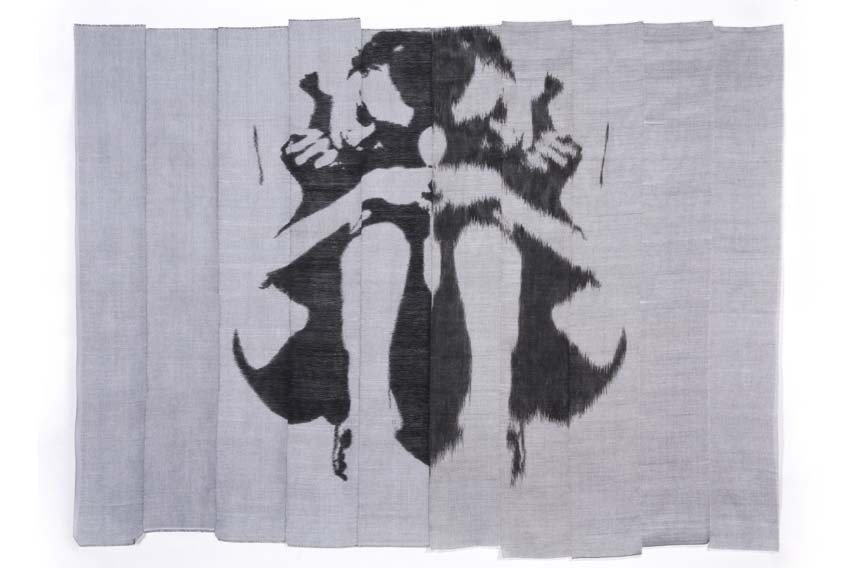 Spinning, weaving, sewing and embroidery once were relegated to the lowly form called craft and women's work. Now in this postindustrial, post-feminist and high-tech new century, we find a renaissance of the human hand. Women and men alike are turning to the old hand crafts to re-establish their creation and connection to raw material, nature and each other. Human handiwork seems to endure instinctively, like the dandelion growing out of the sidewalk, pushing the bounds of tactile creativity in a virtual world.

The Visual Arts Center of Richmond, formerly known as the Hand Workshop, has a distinct exhibition mission: to show contemporary art in which the process of creation is as important as the final object. An exhibition of fiber art by Andrea Donnelly aptly titled, "Where We Meet," opens Sept. 7. The title relates many things: where the body meets the material, where innovation meets tradition and where the artist meets the viewer.

"The cloth I create is a mental landscape, quietly inhabited," Donnelly says of her work. Psychology, social history and personal narrative are embedded in the clothing we choose — or don't choose — to wear. This isn't lost on Donnelly, who holds a master's degree in craft and material studies from Virginia Commonwealth University, as well as an undergraduate double major in art and psychology from North Carolina State University.

Her multi-disciplined approach to making art is especially evident in a triptych called "The Veiling." Three hand-woven cotton pieces, each 132 inches by 102 inches, hang from the rafters, allowing viewers to walk around the cloth, see through it and experience its movement. The delicacy and closeness of the weave is visible, elucidating the collaboration between hand and loom.

An abstracted human figure inhabits each hanging, which is made up of three separate panels sewn together by hand. As with all her work, including the ambitious "Peer," made of 10 panels, and the relatively smaller "Body Blots," Donnelly dyes and paints patterns of her own design onto the warp before weaving. Ikat, an Indonesian technique, is a major aesthetic influence on her work.

Weaving is a laborious task, taking anywhere from 10 to 18 hours for a single panel. (Visitors can try it for themselves on a loom outside the gallery.) Donnelly works in long stretches, sometimes immersing herself in the meditative process, other times just pushing through to see if her vision has manifested itself correctly on the resultant cloth.

Donnelly combines traditional weaving skills with other media and processes, creating a richer, more contemporary take on the craft. For instance, "The Veiling" figures originally were captured through photography. Donnelly set the camera at a slow shutter speed to produce a blurred image of herself waving tulle around her body. Performance, self-portraiture, photography and textile design all formed the foundation for each hand-woven cloth.

Donnelly's patient dedication to her creative process and the formidable results summon a sense of awe at what the human hand can do. S

"Andrea Donnelly: Where We Meet" will be on view at the Visual Arts Center until Oct. 27, with an opening reception Friday, Sept. 7, from 6-9 p.m. Donnelly will teach beginner workshops on dye techniques and surface design applications Oct. 6 and 13 and will deliver an artist's talk Thursday, Sept. 27, at 7 p.m. For information, visit visarts.org or call 353-0094.