Quill Theatre renames itself Richmond Shakes ahead of this weekend’s “All’s Well That Ends Well.”

“The world that we live in wants labels that offer ease of understanding,” says James Ricks, the company’s producing artistic director.

While Ricks says Quill is a good name, he says Richmond Shakespeare helps people associate the company with the Richmond Shakespeare Festival it puts on each summer at Agecroft Hall, a Tudor manor house and estate located in the Windsor Farms neighborhood: “With Richmond Shakespeare, we have our location. We’ve got the better part of our brand in the title. It’s a stronger, bolder, clearer name.”

Henley Street Theatre formed in 2007 with the aim of producing work grounded in the classics; Henley Street is the thoroughfare of William Shakespeare’s birthplace. Ricks took over as artistic director of Henley in 2009. The two companies began working together in 2013 and formally completed their merger in 2015.

In its new incarnation, Ricks says the company’s shortened name of “Richmond Shakes” is intended to knock the dust off the Bard.

“Shakes was sort of our small way of trying to make it not sound crusty and dear, that it’s a company that doesn’t just live in the world of Shakespeare and classically peripheral pieces,” Ricks says. “That’s something that we’re going to try to demonstrate in the coming years, doing a lot more contemporary works or works that have a historical bent but are written by more contemporary playwrights.”

Along for the ride is Jase Sullivan, Richmond Shakes’ new managing director. The native Virginian previously served for two years as artistic director of Firehouse Theatre Project following the noisy ouster of Carol Piersol, the company’s founding director, in late 2012.

Since leaving Richmond, Sullivan has served as the communications director of Berkeley Playhouse in Berkeley, California, producing director of Novato Theater Company in the San Francisco Bay area, and served as executive artistic director of the Weber Center for the Performing Arts in La Cross, Wisconsin.

Sullivan returned to Richmond for “friends and family. I really do love the theater scene and community here,” he says. “I’ve missed it, and I’m happy to be back in the scene.”

Of becoming part of a revamped Richmond Shakespeare, Sullivan lauds the theater company’s past productions.

“It’s such high-quality work, and, hopefully, with the experience I’ve gained outside of Richmond, I’ll be able to help more people find the work,” he says. Ricks says Sullivan is a “huge boon” to the new organization.

“He and I get along great,” Ricks says. “He brings so much experience and organizational fundraising and development [expertise], so we’re back on track and starting to put together a pretty exciting strategic plan for our future.” 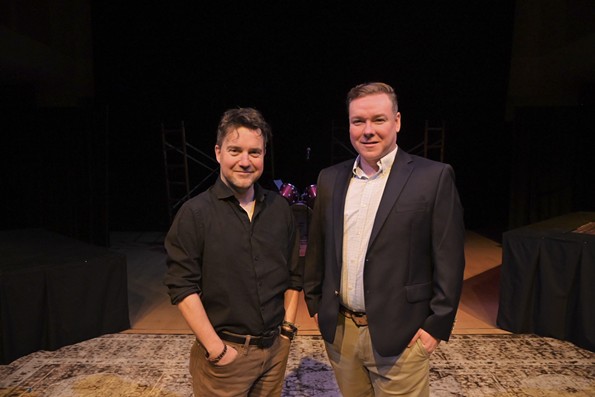 Ricks says this new Richmond Shakespeare will take cues from decisions he made during the pandemic, a time that was especially hard on performing arts organizations. Part of that vision includes mounting projects he wants to do, instead of staging more popular shows that are easier to sell tickets for. One example of this new philosophy is Richmond Shakes’ mounting of “All’s Well That Ends Well,” which opens this weekend. The Shakespearean comedy is considered one of the Bard’s “problem plays,” and isn’t one of his better-known works.

“‘All’s Well That Ends Well’ is sort of a good piece to demonstrate that life is not a fairy tale,” says Ricks, who is serving as co-director of the show. “It’s messy and complicated, and often our plans are dashed to the rocks despite our best efforts. That’s kind of what this play is about.”

In mounting the play, Ricks says the direction leans on the company’s annual tradition of Bootleg Shakespeare performances. In those shows, actors learn their lines for a Shakespearean play separately and only take part in one rehearsal on the day of the show. The result is a raucous high-wire act where actors either flub lines or rise to the occasion, accompanied by their own props and costumes.

“[‘All’s Well] sort of steals from the tropes and motifs of fairy tale literature, but it’s messy,” says Ricks.” “It’s not tied up in a nice little bow in the end, which lends itself nicely to what we do with Bootleg. We take those problem plays from Shakespeare and we have a fun rock ‘n’ roll party. “I feel like my batteries have been recharged a little bit about getting creative with programming, and this is a step in that direction.”