VH1’s new sketch-comedy cartoon has good ideas but falters on the follow-through. 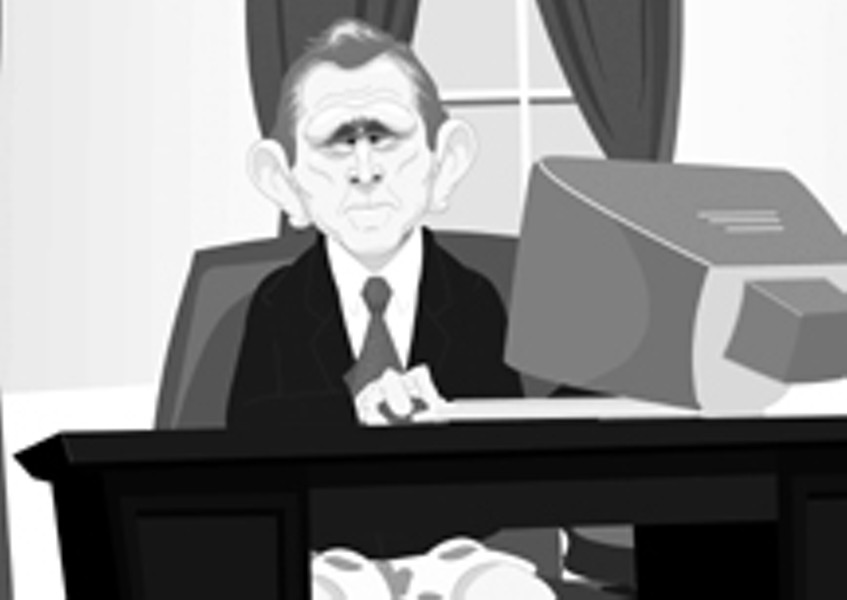 If you’re Web savvy and spend a lot of time prowling the ‘Net, you may know about the origins of the show on CampChaos.com. VH1 says this is the first time a successful Internet brand has moved onto television. CampChaos founder and “ILL-ustrated” creator Bob Cesca began creating cartoon shorts for his Web site in 1998. He and executive producer Jordan Berliant brought the concept to VH1, which rolled out the new show every night over the course of a week last month. Now the 30-minute show airs once a week.

Each episode in the series, mindful of the decreasing attention span of viewers, presents about 10 quick sketches. Some seem to be no longer than 30 seconds, while others stretch on for as much as two minutes. It’s the kind of show that might grab your attention if you’re channel surfing. Five minutes later, you can bail out and not feel as though you’re missing anything.

There’s no doubt that the sketch premises are witty. Yogi Bush and Booboo Cheney drill for oil in Jellostone Park. A movie trailer promotes a sequel: “The Passion of the Christ – Beyond Thunderdome.” A commercial skewers the homeland security secretary and the secretary of defense as it pitches Tom and Rummy’s Ice Cream, which comes in flavors such as shock and almonds and pre-emptive crunch and can be found all the way to the right in the ice cream display case. President Bush speaks to the nation in a coat and tie and boxer shorts, telling Americans that “France, Germany and Russia are no longer our friendsters.” He knows this, he says, because he’s consulted Japan, Britain and JohnnyRad420.

Too often, however, it’s the premise, not the material itself, that’s both clever and funny.

There are occasional bits on “ILL-ustrated” that meet both benchmarks. In a recurring sketch titled “Time Pervs,” Bill Clinton, PeeWee Herman and Larry Flynt — the “Perv Trinity” — visit the past and the future in Flynt’s time-machine wheelchair in a never-ending search for hot women. In one trip to the future, they discover they have inadvertently founded a religion that has survived for 1,000 years.

The funniest and cleverest sketches are aimed at TV’s home shopping channels. In one segment, two perky hosts sell a tattered copy of the U.S. Constitution, which “once was useful, but not anymore,” along with a free Drew Carey “Who Farted?” beer cozy for the first caller. Other bargains include a vial of “Blood of the Innocents,” on sale because there’s so much of it available today, and a dirty bomb from the former Soviet Union –“so it’s imported!”

But too much of “ILL-ustrated” falls flat once you get past the segment titles. A parody of “American Chopper” falls on its face, as does a naked John Kerry demonstrating sexual positions. And so it is with a fast-food commercial featuring Axl Rose as a counterman, and a piece on celebrity cock fighting. (Yeah, the latter works the obvious double meaning for all it’s worth – or not worth, really.)

No subject is too sacred to be turned inside out on “ILL-ustrated” — not religion, politics or sex. Trouble is, pushing boundaries past what’s acceptable to many is no longer all that inventive. Good comedy takes more work than dreaming up a concept.

“ILL-ustrated” may hit the heights it aims for two times out of 10. But that’s just not enough. S