Library Seeks to Save Jefferson’s Papers 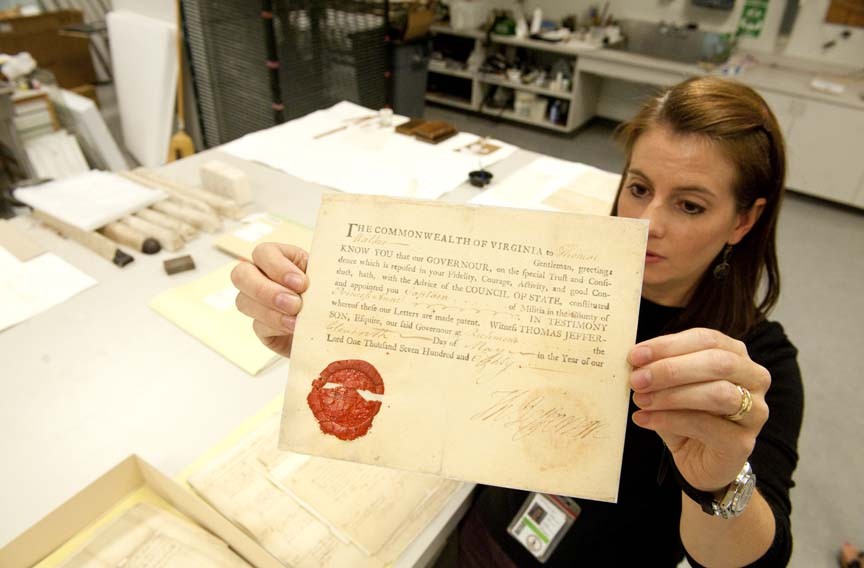 Thomas Jefferson was no slouch.

In his three years as Virginia’s governor, Jefferson negotiated the Articles of Confederation, helped secure French aid for the Revolutionary War and deployed soldiers to fight Native Americans on Virginia’s western frontier.

Now, the Library of Virginia is restoring all 2,500 of Jefferson’s executive papers, which date from 1779 to 1781, to ensure they survive as long as his legacy.

The age-browned manuscripts have been under a silent assault for decades. In the 1940s a conservator with the library tried a then-novel approach to preserving Jefferson’s papers: He laminated them in plastic (specifically, a cellulose-acetate film). “It’s what they thought was a good idea at the time,” says Leslie Courtois, a conservator with Etherington Conservation Services.

The lamination held crumbling documents together, but it had an insidious effect. After just 20 years, archivists noticed that the film was beginning to deteriorate, emitting a strong odor of vinegar. If the lamination were left in place, the paper eventually would bond irrevocably to the film and be eaten by acid. This year the library received a federal Save America’s Treasures grant of $110,000, which it must match, to restore the collection.

Enter Courtois. Working on one small batch at a time, she immerses the documents in acetone, which dissolves the acetate film, and then washes them with water and a solution that removes acid from the paper.

After drying the manuscripts on blotting paper, Courtois then repairs any holes or tears using Japanese rice-starch paste and tissue paper made from mulberry fibers. After the conservation is done, the documents will be scanned and digitized so the public can see them.

Most of the collection isn’t written in Jefferson’s hand. There are government resolutions, receipts, jotted notes and letters to and from several well-known figures of the Revolutionary War: James Madison, John Jay, the Marquis de Lafayette and Capt. John Paul Jones.

Jefferson did sign many of the papers. Or did he?

“That’s his signature, it’s very recognizable,” Courtois says, indicating the understated “Th. Jefferson” on one document. “That. … That’s not,” she says, pointing to a version with loops and furbelows. The fancied-up signature probably was written by a secretary or clerk.

A single letter from Jefferson is currently offered for $150,000 by one private dealer. The value of the library’s collection, which belongs to the people of Virginia, is perhaps incalculable.

Courtois has just begun the two-year process of conserving Jefferson’s papers. She says she’s been struck by the immediacy of Virginia’s early government. An official state resolution often was just a handwritten paragraph, signed by Jefferson. “Kind of a rough and ready operation,” she says.