Special/Signature Issues » The State of the Plate

Slow sips in the search for the timeless digestif. 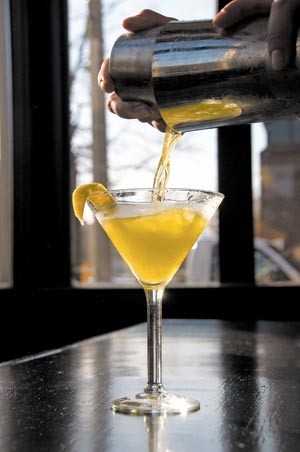 Green Peace: The green oni martini at FanHouse is a soothing blend for after-dinner sipping.

The concept of lingering and relaxing in a restaurant after enjoying your meal is largely a European one, lost on us Americans through a combination of our fast-paced lifestyles and the churn 'em and burn 'em mentality that many restaurants push in an effort to bolster sales. Though not extinct, an after-dinner drink, or digestif, mostly has gone by the wayside. While America's grab-and-go mentality lifts our obesity rates, across the pond a laid-back approach and three-martini lunches somehow make for slimmer Europeans. I'm sure our proliferation of fast food and their four more weeks of vacation have something to do with it too, but I'll bash sloth and lethargy another time.

I recently set out on a mission to find restaurants that champion the idea of the after-dinner drink. I also felt it my duty to try each restaurant's recommendation, for journalistic purposes of course. My only guideline was to ask the owner, manager or bartender what drink — unique to the restaurant or otherwise — they would recommend for after-dinner sipping.

My first stop is the new East-meets-West Fan District eatery, FanHouse. A concise, distinctly Asian drink menu provides some solid post-meal choices. Though not a rule, a digestif generally is consumed to aid digestion and often has some sort of herbal base. With that in mind I opt for the green oni martini. A mixture of Zen Green Tea Liqueur, green-tea-infused syrup and Absolut Citron makes for a soothing blend and provides a nice pick-me-up after a large plate of the crab and lobster fried rice.

My next stop is a block away at the also-new McCormack's Whisky Grill & Smokehouse. Typical of his straightforward style, Mac MacCormack recommends Yellow Chartreuse on the rocks, a herbal mixture long known for its medicinal qualities and soothing effects on the stomach. His second recommendation is a straight shot of a new whiskey he'd recently discovered, Sam Houston Small Batch 10 Year. Mac knows a thing or two about whiskey so I gladly oblige. I also realize this story idea is slowly turning into an all-nighter, much to my pleasure.

Next we hit the much-ballyhooed hot spot Balliceaux, a place known for its emphasis on mixology and high-quality cocktails. It doesn't disappoint. I try the hottie toddie, a warm mixture of orange pekoe tea, a clove, cranberry and Brugal rum. My girlfriend gets the ginger snap, a martini made with cinnamon syrup, fresh ginger, molasses, Amaretto Disaronno and locally made Cirrus vodka. In terms of innovative digestifs, Balliceaux does it right.

When I think of enjoying high-end cocktails after dinner — and when I think excellence — I look no further than Lemaire, the award-winning restaurant at the Jefferson Hotel. If you haven't seen the recent renovations, do so now. The bar is gorgeous, something out of a James Bond film. The only thing missing is a game of baccarat and some creepy Eurotrash guy with a giant scar on his face. My knowledgeable bartender friend Graylen Curtis is on duty and he immediately pulls out the good stuff. First we taste the Drysack Solera, a 15-year-old sherry blend rich with hints of nut and chocolate. He then offers a taste of Penfolds, a tawny port from Australia that has a spicy, caramel-like zing, perfectly suited for sipping after a meal. His picks are spot-on and in line with what Europeans have long known: Fortified wines are best enjoyed after a meal.

Mac McCormack, with a bottle of Yellow Chartreuse, can help you slow down and stay awhile at his new McCormack's Whisky Grill & Smokehouse.

There are other restaurants I intend to visit, but my after-dinner-drinks mission soon turns into prebreakfast consumption, including a shot of my standby Rumple Minze digestif at the Republic Restaurant and Bar. I think. (Please e-mail me at bartender@styleweekly.com with other spots and specialty digestifs you've found in Richmond.)

The mixology revolution and the emphasis on high-quality drinking have taken a firm grip on larger cities, and it's clear that Richmond is starting to embrace the idea as well. While a quick dinner at Chipotle may be commonplace, take the time to sit down and enjoy a meal and a decent cocktail every now and then. Richmond is no New York City (or even Portland, for that matter), but there are people in this city who know the importance of a superior cocktail. And they won't mind if you linger for an extra hour while you enjoy it.

Jack Lauterback started bar-backing and waiting tables in college before becoming a street-level sales rep for Jack Daniels and Southern Wine and Spirits. He's been a full-time bartender for more than two years, and is obsessed with mixology, wine, spirits, Anthony Bourdain and the culture of restaurants and bars. His column, Punch Drunk, a bartender's life in Richmond, appears biweekly in Style's Food & Drink section.

The State of the Plate