At Stacy Young's Fit Camp, personal fitness has its own backbeat. 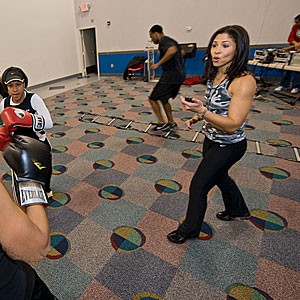 While Steve Anderson stands behind turntables on the first Tuesday night of 2011, he does what he always does when he DJs: He watches how people respond to the music, thinking about the next song and how to transition seamlessly. All of which, of course, isn't novel. It's DJ-ing 101.

What makes the circumstances different is that the people out on the floor with beads of sweat rolling down their faces aren't dancing. The listeners are doing pushups, crunches, jumping jacks and box jumps.

Shouting motivational bon mots over tunes — including the appropriate yet campy “Eye of the Tiger” — is Stacy Young, who's merged her longtime passion for fitness and personal training with a live DJ — playing hip-hop, R&B and rock — to create a new experience she calls Fit Camp.

“Music is critically important to training,” the Richmond native and George Mason University graduate says at a coffee shop days before her first Fit Camp class. She's a buoyant, glamorous 40-year-old who includes riding a motorcycle among her hobbies. “In the past I've asked people to create play lists,” she says. “It energizes people and completely changes the workout.”

Totally. For a guy like me — whose high-beats-per-minute play lists are so essential to my workouts that I'm practically dancing between sets — having a DJ cue up Mike Jones' “Drop and Give Me 50” adds just the right adrenaline rush I need to do as many pushups as I can in a minute while Young looks on with a stopwatch.

Minutes later, she takes residence in another guy's face, smiling and yelling: “You're kind of quiet! I don't hear you!” while the horns in Michael Jackson's “Don't Stop Til You Get Enough” bounce off the walls. She's taunting him — one of a few psychological tricks in her motivational arsenal — while keeping an eye on two other exercising groups in different stations.

Young's Fit Camp classes take place in a warehouse-sized room at the U-Turn Sports Performance Academy. Here there's a feeling of competition and community in the elephantine space, with clusters of people tackling various things at separate times.

“It's great,” says Rannie Layne, a trim 46-year-old who does lots of running. “It's high intensity, high energy. [In training] the instructor is important and she's on top of her game.”

Layne met Young by being on the Richmond fitness circuit — she's been a presence at gyms in the region for years. At Henrico High, Young was a gymnast and ran track, setting a school record in hurdles that she wisecracks “has surely been broken.” At George Mason she trained athletes and students at local gyms. Which is not to say that she's always been fit: She recalls walking down a street in college and seeing, in the reflection of a building, a chubby woman trailing her. Really close. And then she says she realized, “Whoa, that's me.”

Around 1992 she returned to Richmond. After a bout of professional confusion, she landed in the pharmaceutical industry where, for 14 years, she worked as a sales rep, selling medicine for cardiovascular diseases, diabetes and obesity. She soon got back into gyms, coaching and training private clients, some of whom include some of the metro area's most recognizable music celebrities. (Privacy concerns keep her from naming names, but think of well-known R&B stars from the region and she's probably trained them.)

Even as she sold pharmaceuticals Young knew they were for preventable ailments; it wasn't until the last few years of working in the industry that she singled out the gaps in treatment.

“The more savvy physicians focus on prevention,” she says. “But when you have a patient that's overweight, what do you do?” Physicians can recommend weight loss and point to resources — they don't coach, lecture and monitor behaviors that lead to better living. That's where she decided to come in.

For years Young's fitness program has included building a personal relationship with clients. She examines everything, from medical history to daily eating habits.

“I had one client,” she recalls, laughing, who “wasn't losing the weight. I had to tell her, ‘You're a food liar.' I told her, ‘I don't wanna know about the asparagus. It's the stuff you're not telling me I need to know about.'”

Accountability is one of the tools Young uses with Fit Camp, a culmination of work and training, personality and Aclan. And then there's the addition of DJs such as Anderson, who bring the excitement of the disco to circuit training.

“Sometimes people can seem tired or winded,” says Anderson, 42, a member of a local DJ crew called Blendmasters. “But then you'll throw on a record to give them more energy.” He admits that this is a departure from his ordinary style, which is typically a lot of instruction and musical inspiration for line dancing at birthday parties and weddings. Fit Camp is different. “A lot of us have ear buds that we use during exercise,” he said, “but I'm playing different types of music, talking on the mic and keeping them going. It's a fun way to exercise.”

“I'm actually challenged,” says Keva Bates, 32. “I like the group — it feels like a team effort. And the DJ is egging me on.”

Anyone curious but terrified should take heart: Young trains at all levels, customizing her approach to suit the patron's needs. She says she knows what it's like to have weaknesses. “I am an ice cream and pizza kind of girl,” she acknowledges. “If I was trapped on an island and had that, all would be right with the world.”