Let There Be Drums

This act brings more than just the beat. 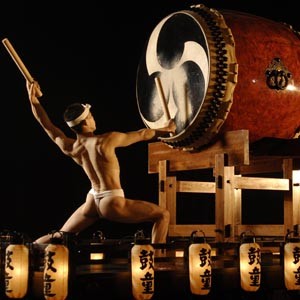 The Kodo Drummers of Japan can make your skin tingle with the vibrations from their powerful, precision drumming. They know you know that. What they want you to know is that drums have a sensitive side, too.

“When you hear drumming that is subtle, intricate, quiet, then [you'll] feel surprised to know the instrument has so many possibilities, not just loud,” says Jun Akimoto, one of the company's managers.

In fact, for a Kodo member, life is an exploration of how many different sounds each type of drum can reveal, and how drumming can unite these differences into music.

Since its origins in the 1970s and its launch under the name Kodo in 1981, the organization has been committed to learning and interpreting the folk arts of Japan.

“Whenever we compose new things, it's not from scratch. We have traditional things in our bodies,” even though the music has been arranged for commercial concert settings, Akimoto says. “We are very eager to get influences from other heritages, such as jazz, classical, pop ... but our core is always based in Japanese folk performing art.”

In addition to numerous drums, the performance at the Landmark Theater will include a few traditional melodic instruments, such as bamboo flutes. And while the drumming itself is dancelike in its physicality, there will be some solo dancing as well.

Everyone in the Kodo organization lives on Sado Island, off the west coast of Japan, where the musicians rehearse together six days a week when they're not on tour. Apprentices, both musical and administrative, live in a dorm and share all aspects of life. Together, they gather firewood in the mountains and cultivate rice paddies and vegetable fields.

“This is very important for us,” Akimoto says. “We think performance is almost the same thing as how we live on Sado Island,” with an emphasis on community rather than individuality. “Often people say, ‘How can you make such precise ensemble rhythm without conductors?' This is one of the reasons.”

The power of music to unify, practiced within a model that merges life and art, is what attracted him to the organization. Akimoto didn't know anything about Japanese drumming until he attended a five-day workshop on Sado Island. Participants were of various ages and social and cultural backgrounds, but “through drums we became one,” he says. S

The Kodo Drummers of Japan perform Thursday, March 17, at 7:30 p.m. at the Landmark Theater. Tickets are $25-$38. Call 800-745-3000 or go to ticketmaster.com for tickets. Visit modlin.richmond.edu for information. This article has been corrected from the print version, which had an incorrect date for the performance in a photo caption.