On some occasions, you eat with your ears. 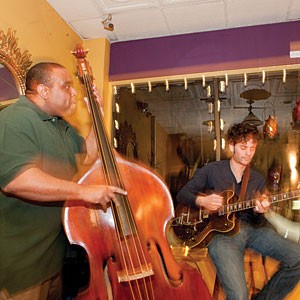 Of all the elements that go into creating the ambiance of a restaurant, music surely must be the most fundamental. Get it right and even a simple meal is enhanced; get it wrong and it's like fingernails on a chalkboard, compromising the entire eating experience.

I know because it happened to me recently at a quaint out-of-town French bistro. On the menu were classic dishes such as trout amandine and tournedos aux champignons and blaring from the speakers was noisy classic rock. Does anyone really want to be assaulted by full-volume Led Zeppelin while savoring escargots bourguignon? Not likely.

Musically speaking, that experience sums up two of the three main miscalculations a restaurant can make. It's essential that the music fits the dining environment and is played at the right volume. The third faux pas is no music at all, which leaves diners to listen to the sounds of silverware and other people chewing, in no way an appetizing proposition [with rare exceptions; see Amuse, Style Weekly's Restaurant of the Year].

821 Cafe (punk and thrash), Aziza's on Main (Sinatra and similar crooners) and Pie (alternative) exemplify restaurants that play customer-appropriate music at an ideal volume: loud enough to hear and enjoy, but moderate enough that conversation is comfortable. You may not be a fan of their musical bents, but each suits its setting to a T.

Allowances have to be made for prime-time dining because almost every restaurant's music gets lost in the noisy clatter of busy Friday and Saturday nights. During the week, fans of vintage rhythm and blues will enjoy the music at Bacchus or Six Burner and those who favor '60s and '70s rock will appreciate Rowland Fine Dining, but don't count on hearing any of that on the weekends.

And sometimes where you sit determines what you hear. At the Empress, the mellow indie music is barely audible on the left side of the restaurant but sounds great in the main dining area. And if you're a fan of club music, listen for the door to the kitchen to open; chef Carly Herring loves her beats per minute and she likes them loud.

With iPods and Pandora internet radio becoming the order of the day at many restaurants, the type of music changes with who's behind the bar. Tarrant's has been known to use the French band Phoenix as the starting point for an evening of poppy Pandora music, but it's also not unusual to hear an older mix with the Smiths and Barry White.

Avalon swings even wider in both genre and volume, running the gamut from angry rock to au courant alternative, with the volume dependent on the size of the dinner crowd. Likewise at Balliceaux, where the bartenders choose the music; occasionally they use the owner's restaurant mix, but more often their own and adjust it louder as the dinner rush lessens. Fans of Secco know that it employs a variety of mixes and the staff is mindful of when the volume becomes lost in the conversation, boosting it to keep the restaurant's lively vibe intact.

It should be noted that for the ultimate, if occasional, musical dining experience, Richmond has a few places offering live dinner music. Every Thursday, Olio has musicians during dinner hours, including folk, jazz and flamenco guitar. I haven't checked it out, but Robin Inn features jazz on Wednesdays at 6:30 p.m. Bistro Bobette, which usually plays Pandora's Pink Martini station for a sophisticated sound, sometimes has an accordion player during dinner service; he's been known to play on the sidewalk outside to entice passersby.

It works because the combination of food and music is such a powerful one. Gentleman bandit Gregory David Roberts may have summed it up best: “Food is music to the body; music is food to the heart.” The savviest Richmond restaurants feed both body and heart with a marriage of menu and music for the best possible dining out experience — no matter what's being served. S