Make friends and knock down pins at the Soul Bowl. 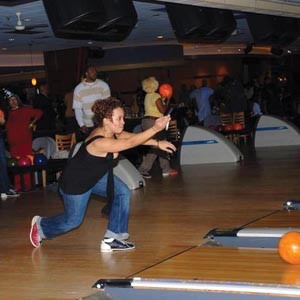 Sure, bowling is pretty awesome as it is, but at Soul Bowl, celebrating its fourth year next week, a bowling alley transforms into an after-hours experience with live music, an open buffet and good drinks.

It's a big party in goofy shoes.
Ironically enough, though, the idea for Soul Bowl — a decidedly adult affair — came from the kids.

“[Pro basketball player] Ben Wallace, one of our clients at the time was doing a kids' day at a bowling alley,” says Johnathan Mayo, whose marketing firm, Avail, promotes Soul Bowl. “It was a nice event, so we started thinking of something similar for adults.”

Mayo, 33 at the time, knew that a lot of his peers liked to party but had grown tired of the drama at nightclubs. Avail specializes in charitable marketing, so in 2007 Mayo decided to merge it all: parties, bowling and charity. So far, Soul Bowl has raised some $50,000 for various local charities, which buy tickets for $25, sell them and get back $10.

“Everything we do is connected to the community,” says Mayo, who holds an undergrad degree in engineering from Virginia Military Institute and master's degrees in business and sports management from Virginia Commonwealth University. “We want to be a positive impact on the community.”

More than 500 people attended the first one; it was cut off at 600 last year so that it wouldn't feel too intimate. James Thompson, in his sixth year as general manager of the AMF bowling alley, says he watched the planning and scale involved: “It surpasses Junior Achievement and the Children's Hospital. They'll take a year to put an event on. Johnathan does six a year. That's amazing.”

“It's basically taking a really fun activity and putting a twist on it,” says Renee Johnson, a 41-year-old married mother who just left corporate America to work in the Richmond Public Schools. Her sorority raised thousands for a scholarship for girls. “I don't really do clubs — that's not my thing,” she says. “A good time for me is dinner with friends.”

At Soul Bowl, she catches up with friends. Cousins who were in town from New York for one New Year's Eve Soul Bowl are still talking about it years later. “Especially if you're single, there's just not that pressure you feel at clubs,” Johnson says. “You really are there to have a good time.” She's met people too that have become friends.

“You may not know the people in the next lane,” she says, “but you end up talking and then dancing with them and having a good time. It feels like you know everybody in there.”

Guests are mostly young professionals, but you'll see college students and retirees thrown in the mix too, she says. Mama J's, the Jackson Ward restaurant that Mayo co-owns with his business partner, Lester Johnson, caters, and through the years they've added a spades tournament, karaoke and giant Jenga and Connect Four games.

“We kept adding to the experience,” he says. Mayo ensures groups say a few words about their charities. “But just a few minutes,” he says, laughing. “People want to get back to dancing and bowling.” S