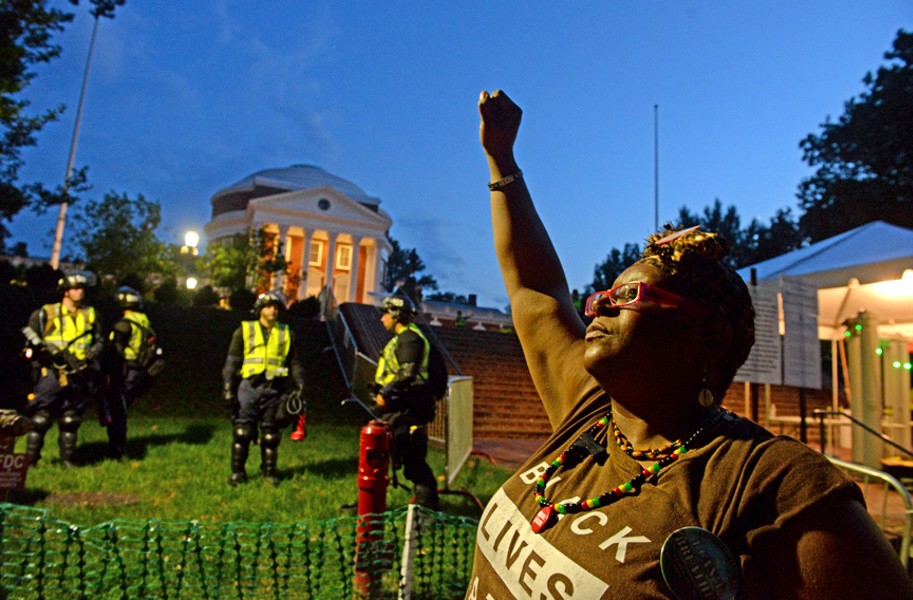 Scott Elmquist As the Virginia State Police guard the Rotunda at U.Va., Rosia Parker raises a fist in the last light of day on Saturday evening. 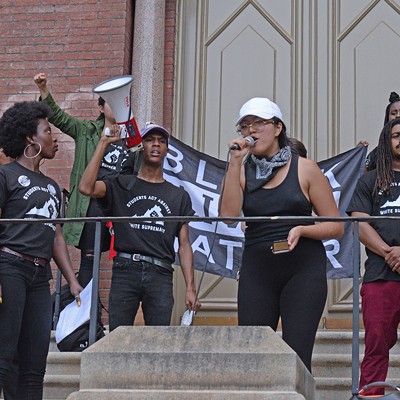 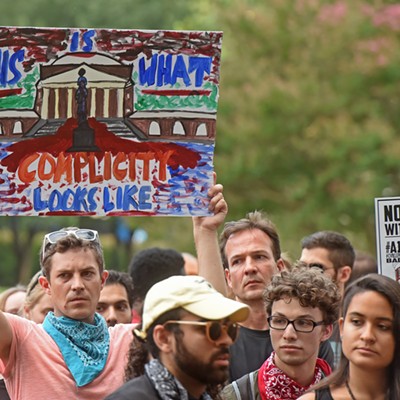 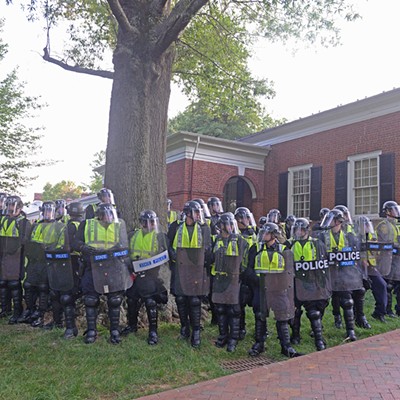 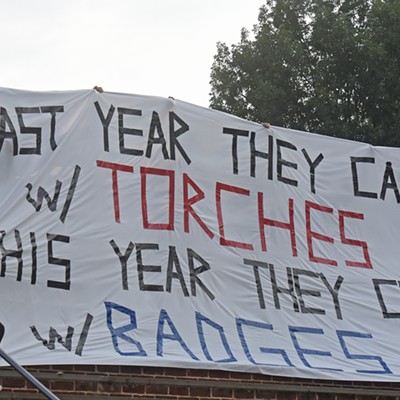 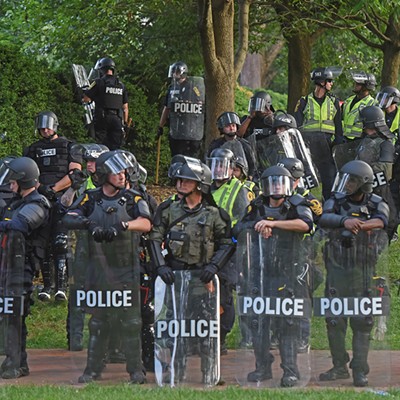 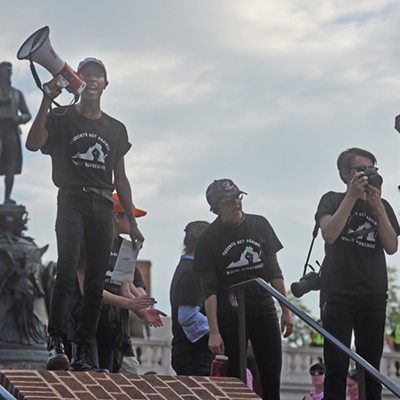 As 7 p.m. approaches on Saturday, Aug. 12, confusion and frustration ripple through the ever-growing crowd in front of the University of Virginia's Rotunda.

Hundreds of protesters and reporters have gathered on Saturday to mark the anniversary of last year's deadly Unite the Right rally in Charlottesville, and only a handful of organizers are first allowed inside the fenced-off area near the statue of UVA founder Thomas Jefferson.

Moments before the gates are supposed to open to the public, the students inside the barricades unveil a gigantic sign with bold letters large enough to easily read from across the street: "Last year they came with torches, this year they come with badges." 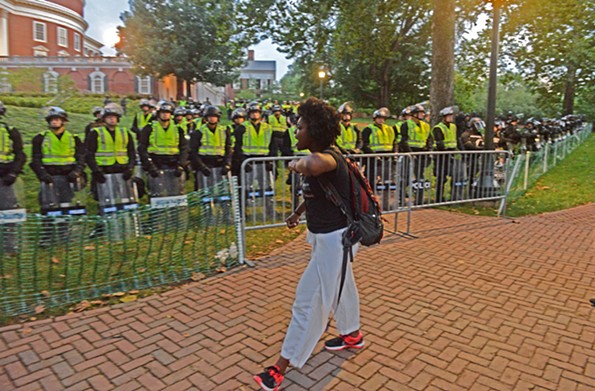 This year, neo-Nazis and Ku Klux Klansmen haven't shown up. And with self-proclaimed white supremacists absent from this year's events, protesters focus on a group that is present and abundant: the police.

Student organizers wearing black T-shirts and baseball caps begin ushering the group away from the gates and toward another part of the university's grounds, and about 30 chanting antifa activists lead the way down the sidewalk. The abrupt relocation of the rally was clearly planned ahead of time. At the bottom of the half-sheet handouts passed around minutes earlier are instructions: Join us at the triangle of grass 500 feet to the east for the Virginia Students Rally for Justice.

With the aid of a megaphone, UVA student Erik Patton-Sharpe leads a call-and-response: 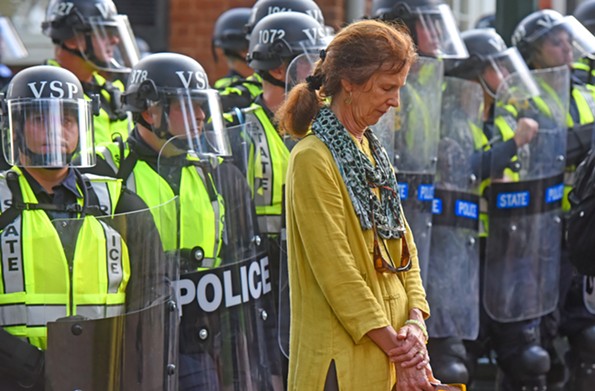 Shortly after the mob of activists and journalists make their way to the new rally spot, which is free of fencing and metal detectors, dozens of Virginia State Police troopers decked out with body armor, helmets and shields make their way down a breezeway and stand shoulder-to-shoulder, silently facing the action. Upon noticing their arrival, most of the protesters turn their attention to the wall of police. The crowd chants "Why are you in riot gear? We don't see no riot here!" and "Who do you protect? Who do you serve?" as the officers stand like statues, expressionless and unmoving.

After several tense moments, organizers make their way through the increasingly loud, boisterous mob, reminding rally participants to not give the police reason to do anything other than stand there.

Once the crowd dissipates, with some marching down Rugby Road to continue protesting at Lambeth Field, lifelong Charlottesville resident Tanesha Hudson sighs and shakes her head.

"The police aren't sitting back, they're actually doing their damn job, like they should've done last year," Hudson says. "I feel like this is them admitting guilt. They know that they failed to provide equal protection."

They're flying down University Avenue in motorcades with sirens blaring, parking armored vehicles in intersections, checking bags at one of two entry-points to the Downtown Mall, confiscating a reporter's cat-shaped keychain though guns are OK thanks to state law, and marching through the college grounds in head-to-toe riot gear.

Hudson was appalled by what she saw in her hometown last August, and like many residents, she lost a lot of faith in the department. But she's glad to see a more significant presence this time around. 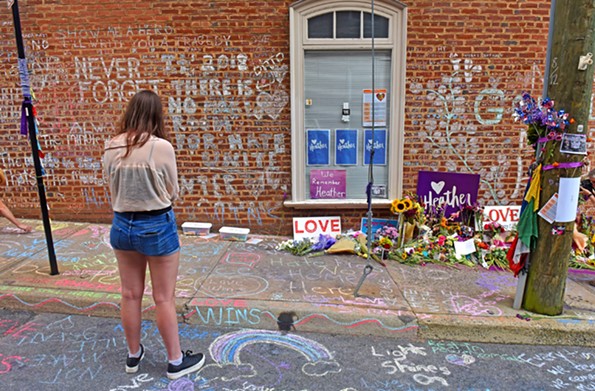 "If I want accountability from the police because they didn't do shit last year and they want to step up and do something this year, then let them," she says. "Whether they're sincere with it or not, if they want to show us that they're here to protect us, we need to accept that."

Hudson goes on to note that this rally is drastically different from last year's, and the hundreds of officers patrolling the city don't have much to do aside from stand around.

"They're not pushing people out of the way, they're not doing any of that. They're letting you express yourself," she says. "I don't have any problem with them. Now if they put their hands on me that's something different, but they're not touching anybody. People are just taking it and running with it the wrong way." 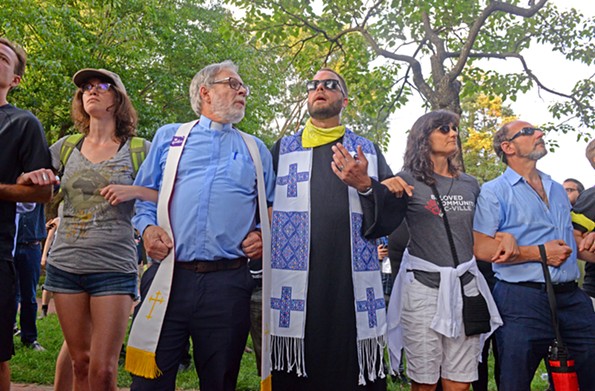 As for why her peers reacted with such fury, Hudson says she understands.

"They didn't do anything last year, and it does look as if they're protecting buildings instead of people," she says, gesturing toward the wall of police with nothing but university buildings behind it.

Local activist Rosia Parker echoes the sentiment that protecting structures over people seems to be the troopers' priority.

For her, this year's showing doesn't do much to repair the damage done last August.

"What they're doing this year is just a Band-Aid to cover the wound that was created last year that still hasn't healed," Parker says.

It's been less than two months since RaShall Brackney was sworn in as Charlottesville's new police chief, and Parker is cautiously optimistic.

"As one black mother to another black mother, I want to give her a chance to prove herself," she says.

Brackney's predecessor, Al Thomas, resigned in December amid fervent criticism of how he and his department handled last year's white supremacist rally. Here in Richmond, police are under similar scrutiny. The rallies here in the last 12 months may have been quieter and without violence, but activists have demands for the Richmond Police Department that they say continue to go unaddressed.

On May 5, about a dozen out-of-town Confederates showed up to protest the possible removal of the Robert E. Lee statue on Monument Avenue. They were vastly outnumbered by counterprotesters and police alike, the latter of whom patrolled the area both on foot and on bicycles. Virginia Defenders for Freedom, Justice and Equality activist Joseph Rogers, a descendant of slaves, recalls a similar wall of police officers that May afternoon, except that time they stood with heavily armed protesters behind them.

"When we're on the ground looking at the situation and all we see are armed police officers with their backs turned on the armed agitators, what conclusions are we supposed to draw?" Rogers says. "We very much felt like we were the ones the police were targeting. It really did do a lot to further damage the confidence we had in the RPD handling of these protests." 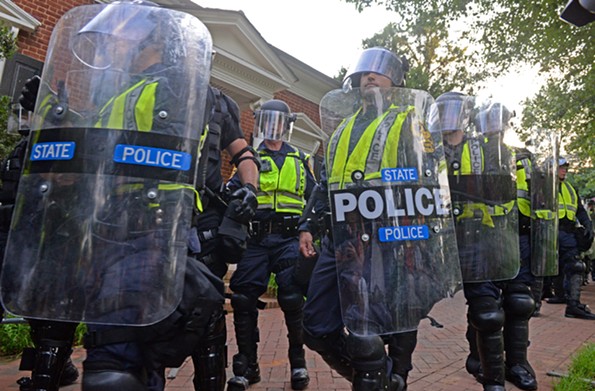 The Richmond department has been watching Charlottesville's procedures since last year, both from afar and up close. According to police spokesman James Mercante, the department sent two officers to Charlottesville to attend and observe the Unite the Right rally last year. Mercante would not comment on what the officers learned on the trip up Interstate 64, nor could he confirm whether the department sent any staff, equipment or other resources this time.

"The department prefers not to share any possible tactics or operational plans as far as assisting in that event," Mercante says. He goes on to add that he is aware of "possibilities of some assemblies here in town" in the coming weeks, referring to another Confederate rally planned for Sunday, Aug. 19.

Tennessee-based group CSA II: the New Confederate States of America and the Virginia Task Force of the Three Percenters, also known as the Dixie Defenders, plan to gather at the statue of Jefferson Davis. The protest is in response to Mayor Levar Stoney's Monument Avenue Commission, which recently recommended removing the Davis statue and adding signs to the other Confederate monuments to provide context.

According to the mayor's office, Stoney has sent a letter to the city attorney asking for a legal review of the commission's recommendations in order to begin taking the next steps.

"With guidance from the city attorney, we will begin to take the necessary steps to implement these recommendations and continue to have the difficult conversations that will promote the understanding and reconciliation necessary to move our city forward," Stoney says.

He goes on to say that the monuments are more than just symbolic — they represent the manifestation of racism in our society.

"As I will continue to say, the monuments as they currently stand do not reflect the values of diversity, inclusion and equity that we celebrate in today's Richmond," he says. "They should be a part of our dark past and not our bright future."

Rogers and his fellow local activists are preparing for the upcoming rally, and he says he expects it to be exactly the same as every other time these groups have come to town: The neo-Confederates show up with their guns, counterprotesters outnumber them, police step in the middle as tensions rise between the two groups, and everyone goes home after a few hours.

Rogers notes that the Richmond Police Department seems to have learned from Charlottesville to keep the two protesting groups separate from one another to prevent physical violence, but he wants to see more from it.

"What they need to learn now is showing that they're not just there to protect the neo-Confederate groups," he says.

Style has submitted a request for the police budget for the May 5 rally, but reports from last year reveal that the city spent more than $500,000 on staffing and supplies for a similar protest in September. Rogers sees that price tag as an excessive use of taxpayer dollars, and says he'd rather see those funds go toward causes like schools or public housing. He rejects the notion that if counterprotesters chose not to attend, the city wouldn't have to send so many officers for protection.

"I think it's more reasonable to say if [the neo-Confederates] weren't showing up with weapons there would be no reason for anyone to be here," Rogers says. "If we keep showing up until they stop, that's a better long-term strategy than anything else. I think police would be out there even if counterprotesters weren't." S