"We Cavaliers decided to study at U.Va. to share Jefferson’s promise for education. And you’ve broken that promise to every one of us." 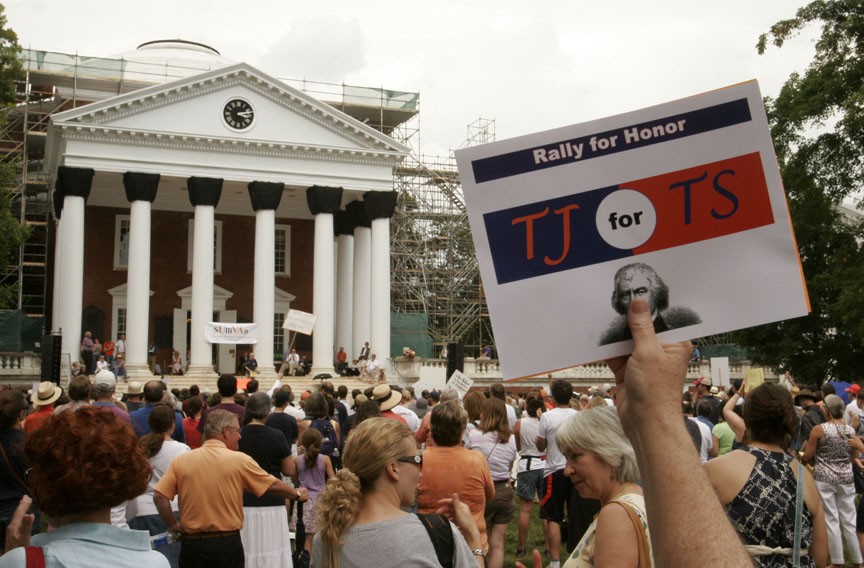 To: Rector Helen E. Dragas and members of the University of Virginia Board of Visitors

I am an alumnus of the University of Virginia and a small contributor to the Alderman Library. Given recent events surrounding the abrupt firing of President Teresa Sullivan, I urge Rector Helen E. Dragas not to seek reappointment when her term ends, and I urge those of you directly involved with the firing to resign. Virginia needs a board that reflects the traditions of the university and the wishes of those who actually enter classrooms to teach or learn.

The Board of Visitors has made many enemies among faculty, students and alumni of the university. To toss out a term I learned in Charlottesville, you have in fact become personae non gratae to many of us who donate money. You may Google that Latin term. I first encountered the classics at U.Va., and, sadly, they have been cited as the sort of small program you wish to cut. More on classics later, because my letter is about governance of a place I consider to be sacred ground.

Your reasons for dismissing Sullivan remain shrouded in the sort of corporate speak that conceals meaning from mere shareholders. Many of you come from the world of finance. It's easy to read, in your pronouncements, that you wish the university to be run more like a business. Wonderful. What sort of business? Companies, including major banks, can be so poorly managed that they collapse, as we saw with the short-sighted thinking that brought our nation to the brink of financial ruin in 2008.

I'll stop there, before I become one of Socrates' Athenian craftsmen who, "because of his success in his craft, thought himself very wise in other most important pursuits." Thus the holder of a doctorate in English has no business advising any of you about financial matters.

Let's then talk about one point of contention: education online. There I'll be on firmer ground; I research and write about technology in the classroom and online communities. Clearly, U.Va. needs a 21st-century curriculum that includes some online delivery of courses. That said, does Virginia really think it should, or even can, compete with offerings from Stanford? That school has released a "killer app" of free online courses and we'd be, at best, an imitator. The university could offer parts of its stellar curriculum to distance learners, but online degree programs would cheapen a Virginia diploma and our school's tradition of broad yet intense learning with roots that stretch back to Athens some 2,400 years. Putting an image of the Rotunda on a Web page does not Jefferson's Academical Village make.

What does Virginia do best? In the corporate world you must craft mission statements, so I'll be bold in suggesting some language. Virginia prepared me for a life of critical thinking and continued learning done in intensive, often one-on-one settings. These included the transformative experience of your summer Spanish language institute. I took that knowledge to my first academic job, in Spain, teaching English. In environments such as David Gies' Spanish house, Tom Noble's two-course history of medieval Europe, Walter Korte's film-studies lectures and work with telescopes on the roof of Clark Hall, my life changed forever and for the better. The faculty noted will get a copy of this letter, to show solidarity with them and to prove that my writing has improved since the early 1980s. Did any of their courses put a lot of money in my pocket, today's corporatist sense of worth? No. But each course broadened my mind. The money followed.

Perhaps your members should get out of the boardroom to sit in on more actual classes. I'd also watch fewer Ted Talks as models for what can change the world. Go over to Alderman and ask for guidance about the long and tortured history of the academy. While American higher education is in turmoil and government is, frankly, financially broke and politically broken, there always will be places where parents want to send their children for world-class educations. Technology in such settings enables learners to create cutting-edge multimedia projects and do better research for traditional papers, even if it means using Google to find the correct plural of persona non grata. The Web doesn't, however, replace the Socratic classroom and spirited debate between informed citizens meeting face to face.

We Cavaliers decided to study at the university to share Jefferson's promise for education. And you've broken that promise to every one of us. As stated on your website, the board's mission is broad but includes being "entrusted with the preservation of the University's many traditions." One of those traditions is shared governance.

No reference to U.Va. can be complete without some words of wisdom from its founder, so to quote him, "In matters of style, swim with the current; in matters of principle, stand like a rock." Ironically, I just met with my financial adviser. I hoped to donate a lump sum, in my will, to Virginia. A tidy sum, if fate and the market remain kind to me. I have no heirs. The money would have been yours.

As things now stand, my donation will go to my graduate school, Indiana University. And there I stand, like a rock, unless reason sways you to do what is best for the University of Virginia: Step down.

Joe Essid teaches at the University of Richmond and can be found from time to time in Charlottesville, buying books and eating Gus burgers.