The most important restaurant to Richmond gets redefined. 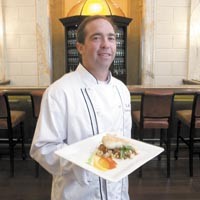 In the final analysis, it's all about the bar. Of the changes about to be unveiled in the Jefferson Hotel's signature restaurant, everything radiates directly from the black-galaxy granite bar rail imported from India. It's the focal point of the new Lemaire — visible from the lobby and through the conservatory windows facing Franklin Street, and the first feature on the lips of staff and consultants as they count down to Lemaire's July 8 reopening.

Instead of the baby grand, there's the four-sided bar and all the liveliness and action such a piece implies. It's a place to lounge on banquettes and ottomans, with chairs that can move among cocktail tables. Guests can enjoy small plates of local foods and wine by the glass served by a focused, congenial staff. These are the laws of attraction for the desired 25- to 45-year-old demographic, the guests Lemaire would like to see as regulars and not just at their parents' anniversary dinners. Perhaps most tellingly, the restaurant's filet mignon burgers — which used to be a room-service-only secret — can be ordered, and eaten, at the bar. It's what the people want, apparently.

Moving a five-star, five-diamond property toward a new business strategy after 23 years of respectable but quieter traffic involves committees, compromises and fat contingency lines in the budget. Helpful, too, are the ears of the big ratings organizations. “I had very detailed discussions with Mobil as well as AAA about our concept and what we are trying to do,” says the Jefferson's managing director, Joseph Longo, “and they totally understood it. They are modifying some of their standards as they relate to dining now, because the dining public is changing.”

That means a restaurant might not have to offer mignardises or amuse-bouches, the morsels served as extras in the most formal of restaurants. Even the linen tablecloths could be sacrificed without damaging a top ranking. Expectations will always be high for food and service that's distinctive, and checklists for the best ratings routinely use words such as meticulous, unique, imaginative and world-class. But casually elegant is now an acceptable standard instead of formal, and Lemaire is betting its 22 new alligator-patterned bar stools that casually elegant equates to liquid green. Awards would be an ideal garnish.

It took longer than expected to get here. Booty Armstrong, one of the hotel's owners, says timing hasn't been optimal for a renovation. “Had we not already begun we'd probably have deferred it,” he says. “It's a hard thing to pull off, but what we hope happens is that people still identify the heritage place that it is, but with flair. It's not different but it's different.”

This captures the delicate conundrum. “There isn't anyone I have met who doesn't have some skin in this restaurant,” Longo says. “Everyone has a very special relationship with this hotel and this restaurant, and we embrace and respect that.” Richmonders have been weighing in on Lemaire for a long time. Not surprisingly, older diners tended to prefer things the way they were. Feedback from younger guests drew references to stuffiness and pretense, though no one complained about executive chef Walter Bundy's food, uniformly considered first-rate. He launched the farm-to-table mission at Lemaire long before the movement became fashionable, and has credentials among the region's best.

Yet Bundy, wry and self-effacing, is somehow the dark horse in the Lemaire equation. He's probably the only St. Christopher's and Hampden-Sydney graduate running a five-diamond restaurant anywhere, certainly the only one farming tomatoes and peppers in a parking lot across from the hotel. He worked within sweating distance of chef Thomas Keller at the French Laundry in California's Napa Valley, in an intense, high-pressure kitchen where food was considered revolutionary and Keller a god among chefs. “Anyone who did well there has done well for themselves,” Bundy says, naming Grant Achatz of Chicago's Alinea, who went to work for Keller the same day Bundy did in 1996, and is now perhaps the hottest chef in America.

This food-celebrity worship puts pressure on Bundy, who withstands the scrutiny but tends to deflect attention. Following a recent tasting session he held for the restaurant ownership — a group that had to approve his concept after a number of revisions — his persistence and a marathon display of dishes were validated. “That was one of the best days I've ever had here at the Jefferson,” Bundy says, admitting relief after months of menu-concept fits and starts. “We're bringing the quality, and hopefully this is something to put Richmond on the map,” Bundy says, wanting fame for his hometown if not for himself. He'll source the soft-shell crabs, the bison rib-eye, the Rappahannock oysters, ham cured with salt and sugar, the local vegetables and mushrooms and herbs, from producers who've become his friends in Virginia fields and waters. “I want people to use the restaurant like they haven't before,” Bundy says. “We want to be busy, busy.”

That starts with the prices. Bundy claims diners will get more value than they might know, because he can't skimp on ingredients — a lesson learned from Keller, who was rigorous in inspecting each delivery. To manage costs, some of Bundy's recipes will require fewer steps, though diners who want a full-blown experience can still get a more elaborate tasting menu with wine pairings, or something as simple as mushroom toast. Lemaire will be flexible above all else, for the drinker, the nosher, the fine-dining couple, the spontaneous small-plates party and the traveler.

Even the Twitterer. The hotel's wine and restaurant director, Ben Eubanks, says social media is, inevitably, part of Lemaire's new marketing thrust. “We're launching Facebook and Twitter pages by the end of the month, and trying to align ourselves with certain influencers in the blogosphere,” he says. “The biggest challenge is trying to find the return on investment. There is an opportunity to reach people and to use that technology to drive traffic.”

Eubanks is equally focused on delivering a memorable wine experience to enthusiasts looking for a new sampling venue. He'll show off a reserve cellar with pricey bottles not often seen or served here. “There are some unique things we can offer,” he says of the off-list treasures, but the range also includes a 150-bottle menu with “aggressively priced” glasses and reference cards to help servers learn what to recommend. “It's affordable and fun,” Eubanks says of Lemaire's new concept — words that didn't seem to apply before and that still might raise an eyebrow.

The business, after all, remains upscale in demeanor — the hotel's history demands a certain reverence. ForrestPerkins, the architectural firm that redesigned the space, is known for hotel projects that don't skimp on luxuries and that fit the cultural context. So Lemaire's new furniture is safely traditional, finishes have the expected gleam, four fireplaces are newly functioning, and the burnt-orange palette and crystal lighting will be flattering to guests, particularly if they're smiling.

The staff talks about bringing more levity to Lemaire, and won't discourage servers from showing personality when it's appropriate. They've got “emotional maturity, which you can't teach, and technical expertise, which you can,” Eubanks says of his hires. They'll wear aprons and alligator-print silk ties from Peter Blair that are more light-hearted than the previous penguin suits. But classic service steps are being drilled into each server in sessions that began on Monday, because a renovation this calculated depends most of all on favorable guest interactions with the front line.

Failure is not an option, Eubanks says of the two-year investment in planning, revision, delay and completion. Next month, after years of pleasing fathers and grandmothers, Lemaire turns its gaze on a younger crowd — one that's being courted in earnest to take a seat at the bar. S

Lemaire at the Jefferson Hotel is located at 101 W. Franklin St. www.jeffersonhotel.com.