City loses another graffiti battle atop the Leigh Street bridge. 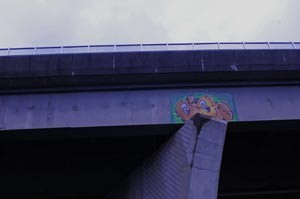 Richmond's taggers don't waste any time. They do, however, waste city money.
One week and one day after a city crew painted over the enormous tags on the Leigh Street bridge over Interstate 95 -- an operation that cost around $1,500 -- it was tagged again.

The new tags, spelling SIGH in orange and gold letters about 6 feet high, are painted right above two of the bridge's massive supports, one facing north and one facing south. The bridge, officially called the Martin Luther King Bridge, rises high above I-95 downtown, between the Seventh Street and Broad Street exits.

“It's certainly a heaven spot as far as graffiti vandals are concerned,” says Environmental Officer Chelsea Ferguson, who handles graffiti investigations in the Fourth Precinct. A “heaven spot,” she explains, is what taggers call a place that's both a coveted canvas and a dangerous venture, where “there's a really good chance they could fall off and die.” Taggers have to clamber onto a precarious catwalk to reach the bridge's supports.

The bridge is one of the city's highest-profile graffiti showcases. On average, 60,000 vehicles drive under it northbound each day, and 65,000 pass under it southbound, according to the Virginia Department of Transportation's 2009 traffic counts.

Several different tags stared down at I-95 commuters until last week. On Oct. 5, city bridge inspectors brought a bucket truck onto the Leigh Street bridge and lowered down workers, who thoroughly obliterated each tag with flat green paint. The last two to be covered were OCULT, in red and white, and SIGH, in red and gold.

SIGH has been spotted all over the city. “I don't know who it is yet,” Ferguson says. “Yet. Of course, we will catch them.” Richmond and Virginia Commonwealth University police have arrested eight graffiti vandals in the last two to three months, she says. Ferguson encourages city residents to call 911 if they see graffiti in progress, or the department of public works to report graffiti that needs to be removed.

The city has had to paint over graffiti on the bridge four or five times in the past five years, says Sharon North, public information manager for the department of public works.

“We've seen an uptick in the ‘artistry' on that bridge over the past 2-3 years,” North writes in an e-mail. “We'll remove the graffiti, then in another couple months it's back out there.” This time, the taggers were faster than that.