Leigh Street Armory Back on the Block 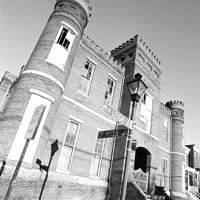 The Leigh Street Armory is for sale. … again.

Often for sale over the years, the historic property was last widely known to be on the market about four years ago as Mayor L. Douglas Wilder took office, says David Herring, executive director of the Alliance to Conserve Old Richmond Neighborhoods. At the time, a bid proposal to purchase and renovate the property as condominiums or apartments was “yanked back,” says Herring, who does not know what stopped the sale.

The armory, at 122 W. Leigh St., recently made its way back on the block. It's listed as surplus property on the Richmond Department of Real Estate Services Web site, but it was unclear at press time how long it had been for sale.

“That poor building has been put out for bid so many times that I'm hoping someone will actually bid on it,” Herring says. “It's a tough economy and it's going to require the right developer to want to put some money into it.”

The armory was once a source of immense pride in Jackson Ward. After the Civil War, when Jackson Ward became known as the Black Wall Street, the armory housed the all-black 1st Battalion of Virginia Volunteers. But more recently it's been a source of consternation as the city attempts to balance its development with history.

“It's been of a state of readiness for sale for some time, but I didn't know it was for sale now,” says Selden Richardson, a historian and president of the board of ACORN. “For every effort [to sell it] there is an immediate and opposing force that comes into play. It's an extraordinary problem and it's going to take an extraordinary solution.”

Herring sees hope in a potential sale, as does Charles Finley, president of the Jackson Ward Association, who was also unaware that the armory was for sale again.

“What I think the community would like would be some kind of community space and not some sort of residential use,” Finley says.

Finley also suggests a heads-up from the city that the property was for sale.

“We don't have the money right now to buy it,” he says. “There has been some discussion, though we haven't made any real effort to find money [since it was not for sale]. But this might be the time.”