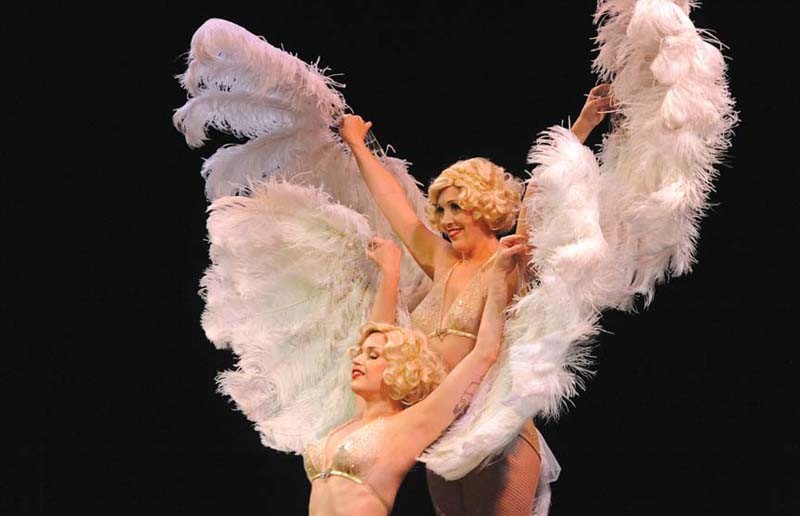 A drag queen in spangled spandex and a foot-tall auburn beehive.

An ice princess who definitely isn’t wearing long johns under her gown and furs.

A pair of blond beauties who emerge like coy cygnets from shell-shaped, feathered fans.

There’s glam and gams aplenty at Friday’s “Revealed: Fabergé Burlesque” — but not much nudity, truth be told.

For the first-ever burlesque show at the Virginia Museum of Fine Arts, performers tone down their costumes, opting for triangle tops instead of pasties and tassels. The only bare chest is that of “boylesque” performer Chris Chaos, a slender young man with a curled mustache and enameled lips. In his sailor-inspired routine, he gets down to a fringed white corset, blue pasties and very brief briefs.

Ophelia Derriere delivers one of the more daring performances, a serpentine shimmy that climaxes with an energetic booty shake. “When you feel the air on your bottom, it is quite a rush,” she says after the show.

The Fabergé-inspired show was conceived in the summer, shortly before the Richmond Varietease burlesque show lost its performance space at the Canal Club. State law allows the Virginia Department of Alcoholic Beverage Control to suspend a venue’s mixed-beverage license if it allows strip teasing or topless entertaining. The law exempts art establishments when the performances “are expressing matters of serious literary, artistic, scientific, or political value.”

An enthusiastic crowd of about 450 attended the Sept. 23 show, which offered descriptions of the eggs that inspired each routine, set to Russian-themed music. “Never in my wildest dreams did I ever think that I would be performing at the Virginia Museum of Fine Arts,” says the evening’s host, Magnolia Jackson Pickett Burnside. But, she says, it was a pairing as perfect as bourbon and ice.

“You know darn well that those chicks who laid the eggs in the other room were drag queens,” Burnside says. “Not that I’m a drag queen,” she adds.

James Walker and Kathy Browne traveled an hour from Charlottesville to see the performances, which Walker praises as “very well done.”

Walker carries a magnifying monocular that brings everything startlingly close. “I had to watch it through this, because I don’t see well,” he says. He may have had the best view in the house.