Legendary “Jackass” Actor Steve-O Has Many Lives To Tell 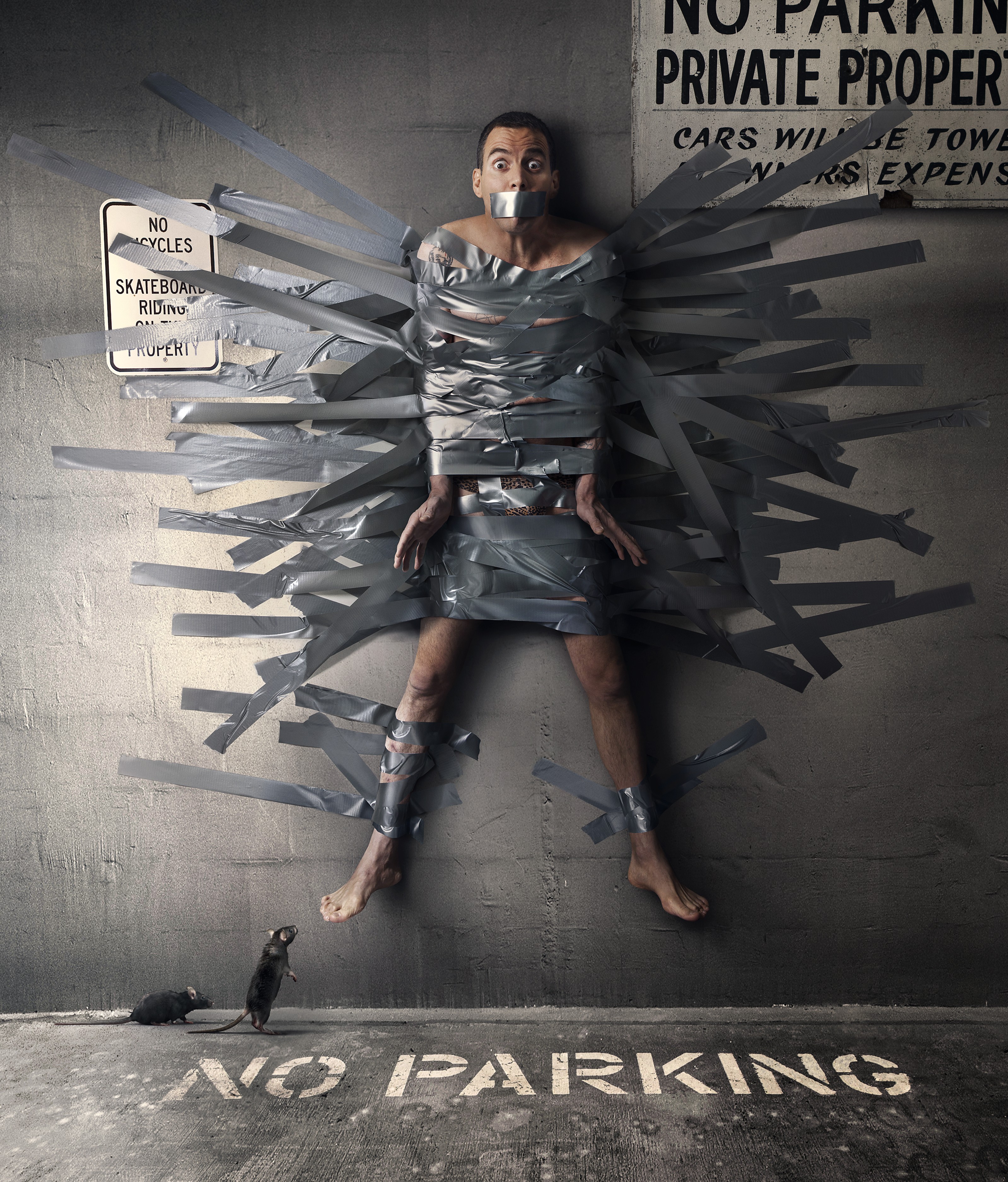 Shakespeare penned those words for his comedy “As You Like It,” but they would’ve made a pretty good tagline for the “Jackass” movies, too.

Gurgling up from the bowels of early skateboard culture, the “Jackass” formula of moronic, insidiously creative and dangerous stunts became an MTV phenomenon before raking in a half billion dollars as a film franchise.

One of its most memorable, willing-to-do-anything stars was Steven Glover, or as he’s better known to the world, Steve-O.

It was said that comedy great John Belushi would run into a wall for a laugh. Glover, from his early days as a circus clown in a Fort Lauderdale, Florida flea market, has been upping that ante. This is a guy who stuffed raw chicken in his jock strap and hung from a tightrope just above hungry alligators for a laugh.

As director John Waters observed in his review of “Jackass 3D”: “A scatological, gay, s/m, borderline snuff movie amazingly embraced by a wide, American blue-collar family audience. Isn’t Steve-O chugging down a glass of sweat collected from the ass-crack of an obese man and then vomiting at you in 3-D the purest moment of raw cinema anarchy this year?”

But after years of lighting himself on fire, stapling his testicles to his legs, diving into shark frenzies, and chugging beer through the wrong hole, Glover wound up in a deranged state, abusing drugs and alcohol. He was institutionalized alongside his onetime cocaine buddy, former heavyweight champ, Mike Tyson.

For the past eight years, Glover has been sober and learning to become a stand-up comedian. In a few weeks he turns 42 and his first comedy special, the raucous “Guilty As Charged,” recently aired on Showtime. He says he has also written a movie that he is now trying to get made about a master of disguise.

Glover will be setting up in Richmond for four days at Funny Bone where he may try the occasional stunt, but mostly he’ll be telling stories from his insane life. Or some would say his amazing life. Instantly friendly over the phone, Steve-O tells me he and his buddy are about to leave to go surfing in the Indian Ocean off Madagascar.

“Oh yeah, we’ll document the trip,” he says. “We’ll be mindful to make sure the shenanigans are non-stop.” You can check out photos from his Twitter feed.

Glover isn’t exactly sure if he’s ever been to Richmond.

“Anything is possible,” he says. “Those early years are a little tough to remember.”

I mention that Gwar lives here, hoping it might fire a memory – but no luck.

His comedy shows were booked at Funny Bone instead of a large theater because he says his brand of raw storytelling is better in intimate settings.

“I do a meet-and-greet after every show where I take a photo with anyone who wants one. I couldn’t do that in a big theater,” he adds. “When you do theaters you’re on an airplane every day. I like doing it this way . . . Only one return trip per week is a real treat. Plus I’ve been thoroughly impressed with Funny Bone. They know what they’re doing and we’ve done incredible business together.”

Glover says for the first few years he did comedy, he didn’t “own it.”

“It was like I was sneaking around doing stand-up without calling it that. At this point, it’s been almost six years of headlining comedy clubs, and I’m not bashful about it,” he says. “I don’t want to say I made a transition because that would suggest I stopped doing everything else. I would say I’ve diversified. It’s still a one-man show, but I don’t lean on all the stunts like I used to -- it’s mostly comedy.”

From the beginning he felt club audiences were rooting for him -- and not because he has suffered for their sins with his bodily pain.

“Ha, I wouldn’t go that far. I guess there’s something about me that I suppose is endearing,” he says of his appeal. “I’m more approachable than a lot of people in the public eye. People might not be able to relate to crazy things I’ve done, but I’m kind of an everyman dude.”

Glover has been what he calls an “attention whore” his entire life.

“I think its all stems from stuff in childhood for sure,” he says. “I always was that way. I’m going to guess that maybe a lack of attention from my parents was in play. Not that they were bad parents, but they were just real busy.”

I can’t resist telling him the story of a local friend who, having not seen “Jackass” before, stumbled upon a scene late one night on cable. The bit featured Steve-O and pals chugging shooters of horse sperm and gagging. When my friend saw that, he immediately projectile vomited across the living room at the TV.

Unsurprisingly, this gets a big laugh from Steve-O.

“Oh, that’s great, man. That second movie was the masterpiece,” he says proudly. “Yeah I really think it was [my favorite]. The first movie we were still sort of figuring it out. The second one, we had it down, we were at the peak of our self-destruction. The drugs and alcohol were still working pretty well [laughs]. Everything we set up just worked like magic, man.”

So did Glover set himself up for life with the money he earned for torturing himself repeatedly? “Well, I don’t know. I’d classify the deals we got on those as fair. You gotta look at it as basically over the course of 15 years, we’ve had three jobs.”

Fans often ask him about the worst kind of pain he’s experienced.

“There’s sharp, acute pain, then there are annoying things that bother you for weeks on end. Whatever pain persists for the longest is the worst,” he explains. “When you’ve got burns on your butt cheeks and you gotta peel your underwear off your ass every time you get up. Or driving or sleeping on that. Dude, the worst.”

Thanks to his sobriety, he hasn’t taken anything stronger than an Advil for eight years now, he says. Dr. Drew Pinsky, who originally called for Steve-O’s concerned friends to institutionalize him before it was too late, previously defined addiction to me during an interview as “the amping up of the need for escalating reward.”

I pass this definition along to Glover and ask if he ever found less dangerous things to replace his addictions.

“Hmm. Food and sex have played their roles over the years. Those are kind of go-to things. That’s so weird, I’ve never thought of it as a reward. I guess soothing oneself is a reward. But apart from food and sex, work really. I get pretty focused on different elements of what I do for work – making videos, coming up with ideas for live shows or whatever. I go crazy if I’m not doing anything.”

During his live shows, Glover says he works to address his issue of compulsive sexual behavior; he is currently dating tattoo artist and model Kat Von D.

“I think that’s what makes my live show compelling. I’m wreckless and shameless in what I’m willing to share. When you go see a Steve-O comedy show, you can count on thinking: “I don’t believe he’s saying that shit.” I focus on making sure its funny and making sure it’s genuinely shocking to hear.”

So what kind of farewell would a guy like Glover consider putting on his tombstone? This sets him off.

“I’m aggressively opposed to tombstones. I think having a gravesite is entirely selfish and self-important. You know the saying ‘an eye for an eye makes whole world blind?’ Well the whole world is gonna become a cemetery, dude. When we bury a person in the ground, we’ve taken that plot of ground and made it completely useless forever, to feed anybody, provide shelter. And on top of that, now it’s creepy, you know? There’s a dead body in there. That’s bullshit. I’m all about cremation.

“But I love that question. And I appreciate you asking it. I think more people should think about it that way. Even when I see a park bench ‘in loving memory’ -- even that bench is creepy, man. I don’t know. It’s funny for me to say, I guess, because all I ever cared about was my legacy and wanting to be remembered forever.

“But fuck a tombstone, man.”

Steve-O performs at Funny Bone in Short Pump Town Center from Thursday, June 2 to Sunday, June 5 with two shows each night on Friday and Saturday. Tickets are $25. Visit Richmond.funnybone.com for more info.