What's fried in Richmond besides the weather. 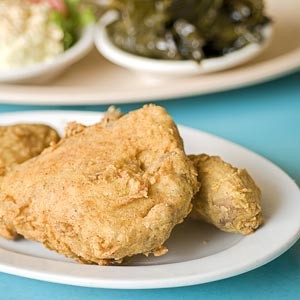 I've never considered Richmond a fried-chicken town. Maybe that's because Ukrop's chicken boxes appeared at every cookout and gathering, and I was focused on lake trout and other Southern dishes instead. So when looking for the best local fried chicken, I solicited suggestions from every friend and a few acquaintances. Here's what I discovered:

Paradise Diner: This experience is chicken in two parts. First, and my favorite, comes the half-bird adventure. Designated as Maryland fried chicken on the diner's special menu, this oversized serving shows off well-seasoned yellow skin and ambrosial meat. Basted and baked in butter (heavenly) for $7.79, this plump and exquisite portion is not for the faint-hearted. Expect leftovers. If that isn't reason enough to visit this friendly establishment, there's an entirely different fried chicken on the menu. Junior's fried chicken is completely contrastive in flavor, a crispy light skin with a traditional take on breading. Floured and deep-fried, the portion is peppery, crusty and pleasantly greasy. Accompanied by stellar sides, this diner shows versatility when it comes to the fryer.
2845 Hathaway Road, 320-1611

Krispies Fried Chicken: Seven seats and no real eat-in area won't matter after your first plunge into the poultry at this Williamsburg Road shop. My initial thought is how “clean” the chicken tastes. Lacking the greasy feel that most fried chicken leans toward, Krispies' bird is soaked before deep-frying, resulting in an uncommonly fresh and crunchy outer layer and a lush meaty core. At $4.29 for two pieces and a side, I can see adding this little joint to my weekly repertoire.
1625 Williamsburg Road, 226-4831

Golden Skillet: “Tender as quail! Tasty as pheasant!” A fried-chicken celebrity because of its roots in Richmond, this spot still keeps its secret recipe strong. Soaked in salt water and then placed in pressure cookers, this chicken's succulence is apparent from your first bite. I recommend eating in one of these throw-backs, and I venture to say that the interior of each is exactly the same as when the chain opened in 1964. Easily recognizable (look for the yellow pan-shaped sign) from the street, there are three in Richmond; one is rumored to be owned by a descendant of the original family Guthrie.
3206 Jefferson Davis Highway, 231-7401
6116 Jahnke Road, 233-0388
7108 Hull Street Road, 276-0702

The Chicken Box: So tiny you'd miss it if you didn't know where to look, this is home of the “Second Best Thing You Ever Ate.” I'm inclined to concur. It offers take-out only, unapologetically unctuous and desperately rich. I find this bird to be less fried chicken and more guilty pleasure, with names such as “chunks and fries” or the Big Chick — exceptional wings and a massive sandwich with the same flaky, salty skin. A suggestion: Get a large drink. You'll want to take the souvenir cup home with you.
3000 Third Ave., 228-2442

Lee's Fried Chicken: Even after scouring the city and surrounding areas, I find myself leaning toward this close-in delight on Broad Street. Although there are three different flavors, the original frying recipe is where it all begins for me. Greasy, fatty and crunchy, a chicken that's awash with in-your-face home-cooked flavor, this is takeout that makes everyone happy. When I sought suggestions, Lee's was by far the most-recommended chicken establishment, further cementing its incredible appeal.
2200 W. Broad St.
355-1059