"Brideshead Revisted" looks terrific but is an unfulfilling adaptation. 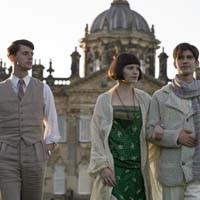 Evelyn Waugh's "Brideshead Revisited" is best known, on these shores at least, from the scrupulously adapted 11-hour miniseries, which played to rapt audiences here in 1982, making Jeremy Irons a star and giving Laurence Olivier one of his last plum roles.

But the makers of the new "Brideshead" have put it about in the press that the beloved series got it wrong somehow or other and have hinted that their film represents a kind of restoration. The claims are ridiculous. Although the characters' names in the movie are certainly familiar, their personalities and motivations have been altered almost beyond recognition. I cannot think of another screen adaptation that treats its source with similar indifference, almost contempt. Of course, if turning away from Waugh yielded dramatic dividends, all would be forgiven. But screenwriters Jeremy Brock and Andrew Davies have merely served up a family melodrama, insipidly conceived and clumsily executed. The actors, clothes and cars, however, look terrific.

"Brideshead" follows Charles Ryder (Matthew Goode) through a quarter century of his involvement with a glamorous, rich and very Catholic family of porcelain-skinned beauties, the Flytes. A son of the (Protestant) haute bourgeoisie, Charles falls for the decadent, teddy-bear-toting Sebastian Flyte (Ben Whishaw), whose family home gives the story its name. In a matter of months, however, he falls even harder for Sebastian's sister Julia (Hayley Atwell) when the trio go to Venice to visit the family patriarch, Lord Marchmain (Michael Gambon), a scoffing apostate who has abandoned his wife for an Italian mistress.

Attempting to disentangle himself from the romantic attentions of the ever more drunken and desperate brother, Charles finds his way to the sister blocked by the icily imperious mother, Lady Marchmain (a stony-faced Emma Thompson). This pious matriarch, when she's not reducing her son to a sniveling wreck on account of his proclivities, is on the lookout for a wealthy Catholic for Julia to wed. She finds him in Rex Mottram, an unscrupulous Canadian with ministerial ambitions. Julia, ever obedient, assents to her fate in spite of her deep, deep love for Charles. Will their time ever come?

Much of this is quite foreign to the plot of the novel, in which the fiery Julia's marriage to Rex is an act of defiance (her family won't even attend the wedding). In the movie, however, she is merely a spiritless girl who chooses duty over love.

Plots, not characters, need to be simplified in the translation from novel to screen, but Julia's diminishment is entirely representative of this tone-deaf affair. Lady Marchmain, in the book a difficult character to warm to (although in some ways saintly), emerges here as an unrepentant harpy, full of self-pity and indignation. As for Whishaw's performance, in place of Sebastian's great charm and accomplished dandyism, we just get mincing and clinginess, more "Wedding Crashers" than Waugh.

Charles, too, of course, is utterly transformed, and in a most uninteresting way. The Charles we've known until now can certainly be an irritating prig at times, and in his own words, in the book, is often "a small part of myself pretending to be whole." But Goode's Charles is simply a bounder too busy angling for the Flytes' fortune to be worried about parts, wholes and whatnot. "Is there, Charles, finally no end to your hunger?" someone asks him, in a line so vulgar you'd guess it was parody.

Alas, it isn't. Again and again, in what may be the strangest thing about this misfire, Waugh's sparkling dialogue, often hilarious, has been replaced by what seem outtakes of a script bound for Lifetime.

And gone, finally, is the novel's sense of time and place. Lord Marchmain is a man whose great-aunt saw the bonfires announcing Lord Nelson's victory at Trafalgar and whose son's boyfriend died in the Nazi camps. The (for Waugh) gloomy question of where England and the rest of the world were headed colors every page of "Brideshead Revisited" and adds depth to a story whose sentimentality is the only thing at all on display in the film. The sense of history, the language, the nuances of character -- all these have been omitted from a movie whose only virtues are lush cinematography and a lovely parade of cloche hats, Rolls-Royces, champagne flutes and linen suits. (PG-13) 135 min.  S