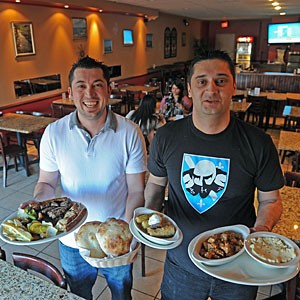 There are restaurants I'm hesitant to talk about — not because they are distasteful or displeasing,  but because I want to keep them to myself. Selfishly, I want to be the only person to enjoy the holes in the wall, the tiny unknowns, the hard-to-find treasures. Yes, I realize this is ridiculous. These restaurants would never survive with just me as a patron, and frankly, I'm far from the only one who's discovered them. Still, the last thing I want to do is put a delicious little spot on blast.

Balkan Restaurant on Patterson Avenue is this type of restaurant. Unassuming and plain, it sits in a strip mall begging for no one to notice — you'd walk right by if you weren't specifically looking for the place or following your nose. When the door's open, the smell of fresh-baked bread all but asks you to come in.

The Balkan area is mapped as most of southeastern Europe, including Bosnia, Turkey, Hungary, Greece, Serbia, Bulgaria and Montenegro, among other countries. The mix of influences produces a layered cuisine full of deep spice and hearty earth tones. Balkan Restaurant skillfully showcases these lush flavors for a minimal price and little flourish. The stuffed Balkan burger ($8) is massive and oozing with mozzarella. House-made lepinja bread, tender and tasting similar to pita, is served with a hand-formed savory patty commonly called pljeskavica. The result is tougher than an American burger but packed with flavor.

The Hungarian goulash warms the soul. Large chunks of beef, slightly on the drier side, are simmered for hours in paprika and served alongside thick mashed potatoes. Even the lunch portion ($8) is large, so be prepared for leftovers. If you're interested in a taste of most of the menu, the Balkan mixed grill ($18, serves two) is a great dinner choice. I'm particularly taken by the cevapi, a house-made skinless sausage, and the Balkan potato. Cevapi is a lumpy and misshapen cylinder of ground meat. At Balkan it's grilled with an outer crisp and a soft chewy inside. The potatoes at $2.50 for a side include a mingling of heavy cream and fried edges. They're unexpectedly light.

Order a burek ($5). This house-pulled pastry is stuffed with a choice of cheese, spinach or meat. While all of the options are satisfying, I stray toward the meat because of its intriguing mix of sweet and savory.

Most dishes are served with the same extraordinary bread and avjar, a roasted red pepper and eggplant spread. Ask for the Bulgarian feta and cream cheese spread as well. Not advertised on the menu, it's tasty on the warm bread and makes a fantastic partner with the sear of red pepper.

Dessert is equally gratifying. Shredded apples in flaky filo ($4) are gluttonously worth the extra stomach room. Light crepes ($4), curiously well-matched with rose hip jam, are pleasing for the adventurous eater, tangy with likeness of orange.

Great food deserves recognition and my pipe dream of keeping Balkan Restaurant close to the vest is absurd. With its homey nature, simplistic menu and charismatic owner, it won't be long before others are suggesting it to friends.