Two magnificent and brilliant individuals, who made Richmond their adopted city, died in September. For more than half a century each, John deVeaux Riddick and Sara Belle Slusky November made indispensable and lasting contributions to the performing arts here. Each was elegant, but equally down-to-earth and blessed with a gentle and confident manner. Their respective wit and wisdom graced any gathering, large or small, they attended or hosted.

Charleston, South Carolina native Riddick, known by his middle name, died Sept. 7 at 94. This member of the greatest generation made his way to Richmond after serving in Italy during World War II. He graduated from Richmond Professional Institute, now Virginia Commonwealth University, and soon thereafter caught the theater bug in his hometown at the Footlight Players and the Historic Dock Street Theater. He returned to Richmond in 1952, where with his longtime partner Robert Watkins, established Design, an interior design firm that was the city’s first to promote modern and contemporary design. He also devoted himself tirelessly to building theater and ballet companies. An actor with a deep melodious baritone, he starred regularly at the Barksdale Theatre and performed in the first adult production of Theatre IV, now Virginia Repertory Theater. He designed and built sets for the Richmond Opera Company, Swift Creek Mill Playhouse, Dogwood Dell, the Children’s Theatre and Theater IV.

With Watkins, he co-founded the Theatre at the Bolling Haxall House, which presented drawing room comedies. Not surprisingly, Noel Coward was one of his two favorite playwrights, along with William Shakespeare. Riddick was also a co-founder of Ballet Impromptu and the Richmond Ballet, for which he designed sets and was technical director. At the time of his death, he was still active with the Concert Ballet of Virginia, a company he co-founded in 1976 with Watkins and Scott Boyer, who survives him. For 62 years, Riddick also created settings for the Bal du Bois, a lavish annual gala that benefits the Junior Board of Sheltering Arms Hospital. 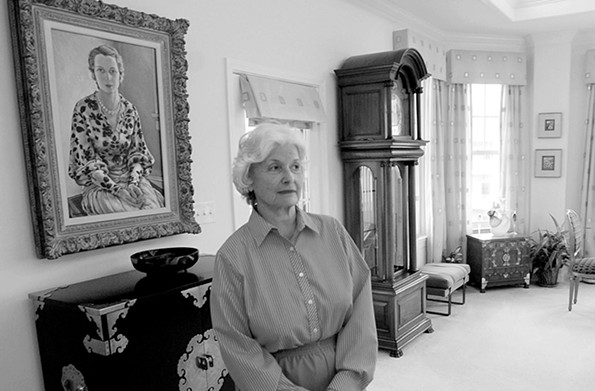 Sara Belle November, who died Sept. 18 at 91, was born in Augusta, Georgia. She caught the theater bug as a child while performing in Gilbert and Sullivan operettas in summer camp and playing summer stock in Pennsylvania. She moved to Richmond in 1950 when she married Neil November, a successful and irrepressible businessman and civic leader who didn’t necessarily share her passion for the stage. At Randolph-Macon Woman’s College, now Randolph College, and later at the University of Georgia, she received degrees in chemistry and biology and worked for a time here as a medical technologist. November appeared in numerous musicals here but played a supporting role as a generous patron of the performing and visual arts. At performances or openings, she was usually on the arm of her doting husband. Famously, he endorsed his wife’s love of local theater by making major gifts to local companies and organizations who named their theaters for her or the couple. The Sara Belle and Neil November Theatre on West Broad Street, which serves Virginia Repertory Theatre, is the most visible of these gifts.

Among many other honors, both Riddick and November were recipients of awards from the Richmond Theatre Critics Circle at the Artsies. But what made these dedicated and sharply focused individuals so essential to all they touched, and the life of Richmond, was that they stayed active to the end of their long lives and remained young in ideas and spirit. November was still driving until a few weeks ago. Handsome people, they were always impeccably turned out, but more importantly upbeat and sincerely welcoming.

November loved dining out with friends and was a welcome sight whether at Enoteca Sogno on Bellevue Avenue, or at Tautog’s near the Virginia Beach boardwalk. Riddick whipped up delicious meals at home.