Leader of the Pack

Theatre VCU's "Grease" is the one that you want. 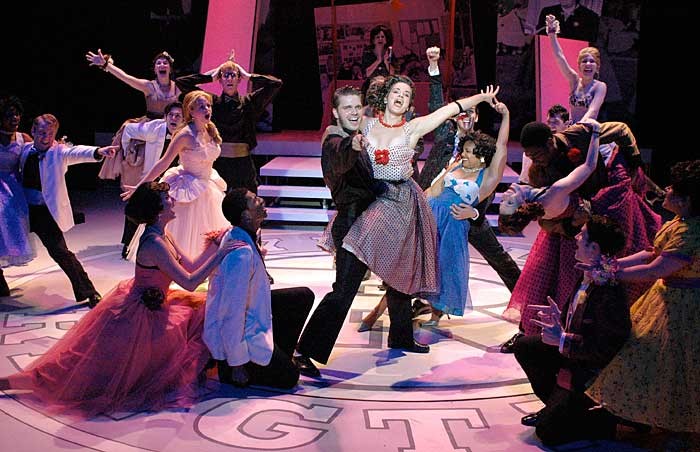 One of the pleasures of seeing college theater is witnessing the introduction of a fresh class of talent to the stage. Working with Theatre VCU, students become well acquainted with the world of Richmond theater, and the department shows their budding talents off to good effect.

Set at a high school in 1959, "Grease" has become a cultural touchstone. Attractively directed and choreographed by Patti D’Beck, the display of Virginia Commonwealth University’s raw talent more than makes up for some of the technical disappointments in this tale of greasers and drive-ins.

Cat Wheelehan’s excellent voice stands out in her role as Sandy Dumbrowski, the good Catholic girl still holding onto her virginity. Drew Sease’s decision to play high school heartthrob Danny Zuko sympathetically brings life into what could easily be a two-dimensional character. Katie Ford is particularly compelling as Rizzo, the bad girl dealing with some very adult problems.

After playing Angel in Firehouse Theatre Project’s “Rent” in 2010, Antonio Tillman shines in yet another show-stopping performance with “Beauty School Dropout.” In perhaps the most interesting cameo role this season, Richard Wenzel portrays the main brain, DJ Vince Fontaine. Wenzel may be better known to audiences as VCU’s world-renowned epidemiologist and editor-at-large of the New England Journal of Medicine.

The ensemble’s beautiful voices bring luster to some of the musical’s lesser-known numbers, like “Mooning” and “Freddy, My Love.”

Technically, the show had a number of issues on opening weekend. Missed sound and lighting cues were rampant, most noticeably when the set crew still was moving furniture as the lights came up. The cast still seemed to be getting used to their wireless microphones, accidentally thumping and brushing them during numbers.

Though Jim Jacobs and Warren Casey’s musical is prone to nonsensical numbers such as “We Go Together,” and questionable messages, such as changing your personality to please others, it’s undeniably fun, and the university’s production is an entertaining evening of theater. And make sure that you show up 15 minutes early to catch Wenzel’s amusing pre-show performance.