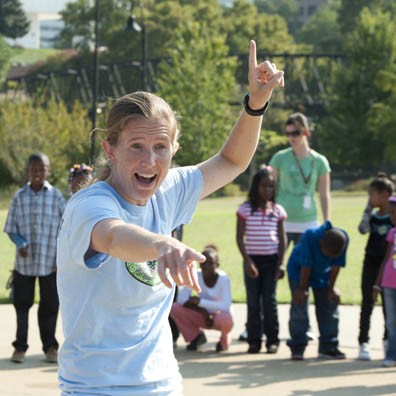 The boy had never watched a sunset. That's what he told Lawson Wijesooriya after they'd reached the top of the hill. It was 2006 and she was on a camping trip in Central Virginia along with three volunteers and a group of five schoolchildren from Church Hill.

Wijesooriya had gone hiking with one 12-year-old who came from a particularly difficult background, she says. They sat and watched while the sun slowly disappeared below the horizon. “That was one of those moments that make you realize what limited access that some of these kids have to nature,” Wijesooriya says. “We have to be better about giving them that.”

That's Wijesooriya's mission. A teacher by trade, she works part-time as the executive director of the Blue Sky Fund, an East End nonprofit built around the idea that being a healthy human being requires regular interaction with the natural world.

For Wijesooriya, it's the proverbial dream job. She spent much of her formative years first as an attendee, and then as a counselor, at the Teton Valley Ranch summer camp in the wilds of Wyoming. “It was where so much of my own self-discovery took place,” she says. So when Blue Sky founder Fritz Knapp approached her in 2006 with an offer to help Richmond youth who couldn't otherwise afford sleep-away camp to have similar experiences, she jumped.
Three years after that first trip, Blue Sky has seen its budget grow while serving more than 350 Richmond children a month with programs that take them everywhere from James River Park to deep in the Blue Ridge Mountains.