Latino Project at Pony Pasture Is Sign of the Times 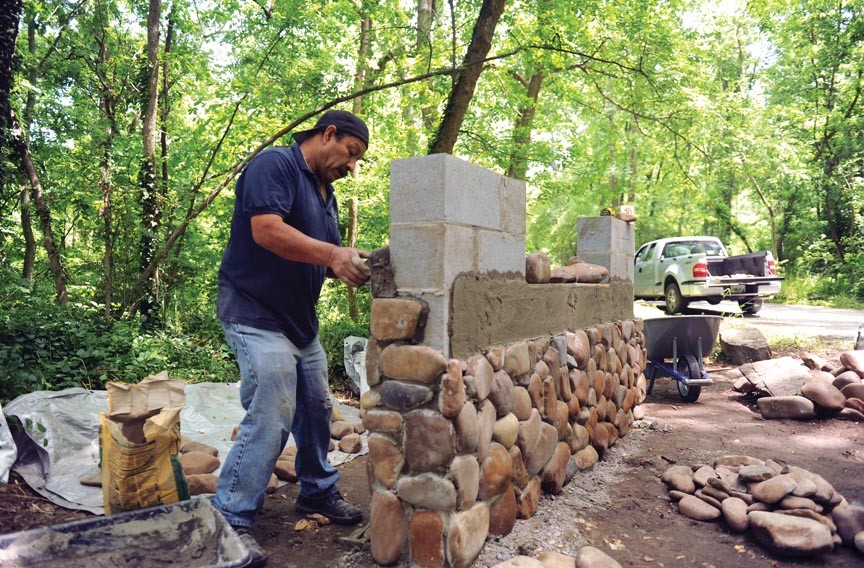 Once singled out for littering by city park officials, the Latino community is taking ownership of Pony Pasture Rapids.

For the last week, J. Refugio Hernandez Gonzalez and his brother, Martin Gonzalez, have been building an entrance sign to Pony Pasture, the city park along the James River on Riverside Drive. It's made of river stone.

"We needed a way for people of Hispanic origin to take ownership" of the park, says Ralph White, manager of the James River Park System. "This is the first time the Hispanic community has volunteered its time to do a public project. This bonds them to our Richmond community."

It's a sign of the times, perhaps. A few years ago, White says, the Latinos who frequent the park — during the peak spring and summer months, more than half the visitors are of Hispanic origin — often left behind dirty diapers and glass bottles, but now religiously keep the park free of debris.

"Truth is they had a bad reputation. They didn't know our rules," White says. "There was a little bit of ill will between them and the Anglo community."

Warren Foster, a member of the Friends of the James River Park, says last winter he figured why not seek the help from Latinos who use the park to construct the sign. Then Wilken Fernandez, a translator for the city's Hispanic Liaison Office, contacted Martin Gonzalez, owner of the La Milpa restaurant in Chesterfield County.

"We are very committed to the natural," says Gonzalez, who moved from Mexico City to Richmond 18 years ago. "It's cheaper coming here than going to the beach. It's a family tradition."

Giving back only made sense, Gonzalez says. And constructing the sign will give the community a connection to the park that they haven't had before, White says. He's come to appreciate the Latino community more and more, he says. After all, Pony Pasture once was known as a redneck hangout — a place strewn with beer bottles and party animals "looking for women," he says.

"I'm not saying there is anything instinctively bad about being a redneck," White says. "We all like a beer, which is illegal in the park."