Food Review: A television chef heaps it on in the Fan at Mint Gastropub. 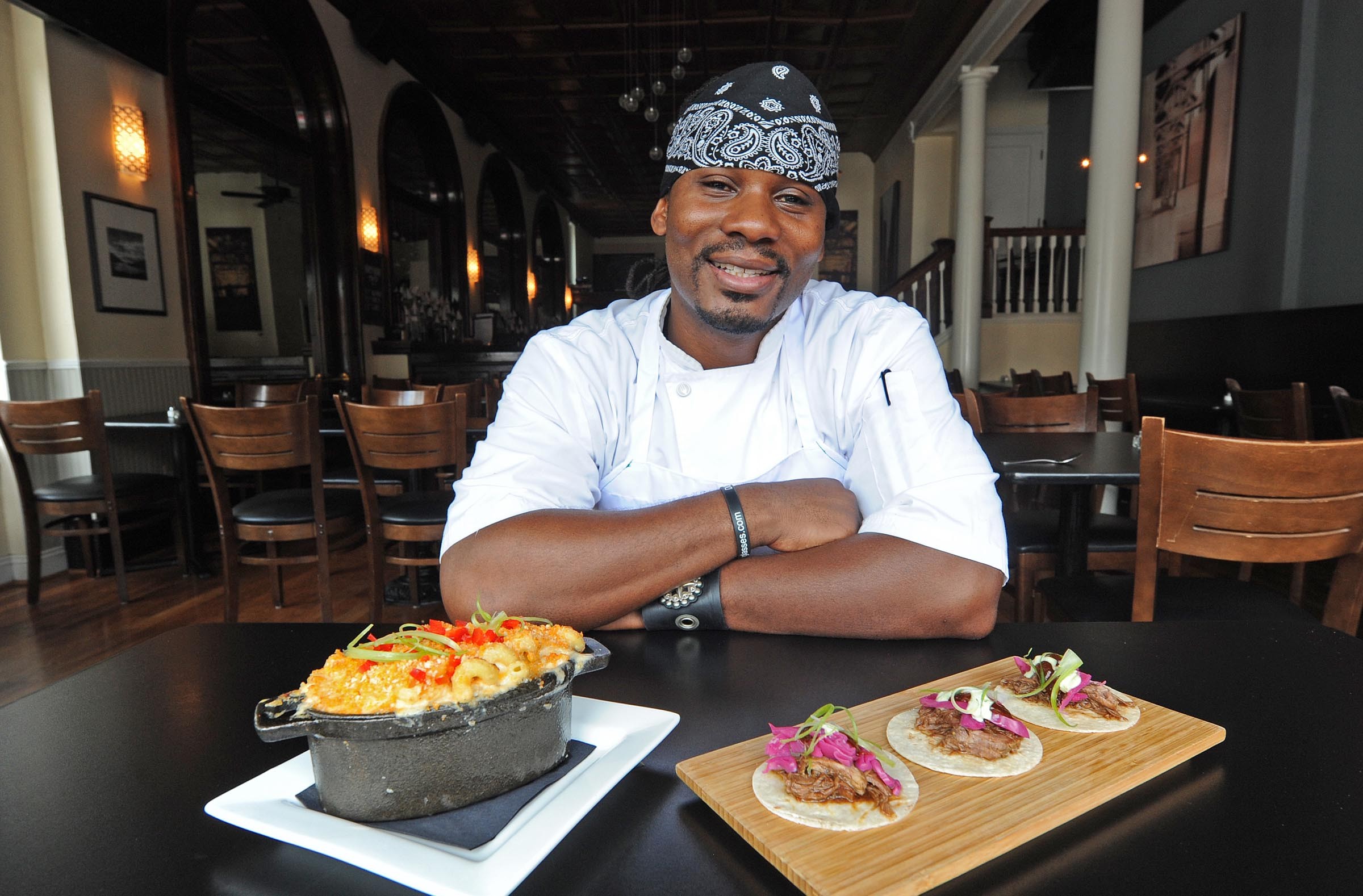 When Beloit College issues its annual mindset list, we get a reality check about the cultural reference points of America’s freshman class. This year’s noted that for the class of 2017, GM always has stood for genetically modified food, and GPS always has meant never needing directions, only an address. We’d add that these 17- to 18-year-olds never have known a time when food television programming wasn’t so ubiquitous that chefs were household names.

As the cult of celebrity chefs has exploded, it’s almost inevitable that one would land in Richmond. Malcolm Mitchell, a finalist on season eight of “Food Network Star,” where he was mentored by Bobby Flay, has taken over the reins at the recently rebranded Mint Gastropub. The only physical change seems to be the logo with the chef’s name painted on the Davis Street side of the building. Inside, you’ll still hear an appropriate mix of alternative and classic rock (Ryan Adams and the Beatles) and frequently see families with children enjoying a meal.

The menu of small and big plates reflects the influence of Mitchell’s Charleston, S.C.-born mother of West Indian descent. Mexican barbecue chicken wings with chipotle sauce ($8) are fat drumettes, smoky with medium-hot spice. Lobster tempura lollipops with frites ($15) come three to a plate with spicy lobster roll dressing but could benefit from a bit less batter to let the lobster shine. Fried pheasant fritters ($8) are a surprise because rather than bits of meat in batter, they’re whole pieces of meat also tempura fried, an unexpected upgrade. Slightly misnamed, the New Zealand lamb chop ($13) is actually four bite-sized chops, a tasty choice if you like meat on the bone.

The Southwestern crab cake ($10) packs just enough heat to be different and a whole lot more so when dipped in garlic-horseradish mayo. The accompanying micro-green salad with roasted corn, red peppers and poblano chili aioli is so fresh and flavorful I grab the menu to see if I can order it by itself. Sadly, no. Seasoned house-cut fries come skin-on with a choice of dipping sauces, from spicy Chesapeake to sriracha ketchup, but lack crispness. A generous bowl of Gulf shrimp and Parmesan polenta ($18) gets points for the creamy polenta. But what’s billed as spicy tomato lobster sauce comes across as bland.

Brunch fans, and that’s all of Richmond really, will appreciate that Mint serves both Saturday and Sunday. The hangover ($12), a short ribs poutine obviously designed to mitigate the effects of the night before, faces stiff competition from the crustless shepherd’s pie quiche ($10), a satisfying and artery-clogging crock of seasoned ground lamb, scrambled eggs, gravy and diced potatoes smothered in white cheddar. If meat isn’t your thing, the grilled cheese bites ($9) might be. A small bowl of roasted tomato soup with fresh basil cream tastes one step removed from biting a fresh tomato in the garden. Again I’ll bring up semantics because the three grilled cheese bites are really fried and hardly bite-sized. They’re also almost entirely bread, so don’t expect a thick, gooey cheese riff on the classic.

Desserts include beignets, bread pudding and cobbler, but your best bet is the toasted marshmallow milkshake ($6). It looks small when it arrives, but it’s soon clear that it’s perfectly proportioned. The shake is shot through with shaved chocolate and sprinkled with graham cracker bits, but the best surprise is two toasted marshmallows in the center. Who knew how fabulously chewy and smoky that cold, toasted marshmallows could be?

Tempting as it might be to dismiss a television-savvy chef with his name on the building, Mitchell has designed a menu full of filling and, in some cases, different enough bar foods to justify the gastropub rebranding. And a pub it is, with happy hour starting at 4 p.m. and a short but clever cocktail list. The ingredients of the perfect storm — Gosling’s Black Seal rum and Maine Root ginger beer with lime zest and candied ginger — are a nod to the bartender’s past. Ask and he’ll tell you.

“A good meal should leave you the same as good love … always wanting more,” Mitchell is quoted on Mint’s website. I can’t say I want more on any of my three visits because everything is so filling. Maybe what he means is that it should leave you as satisfied as good lovemaking: ready for a nap.