Landscapes of the Lost 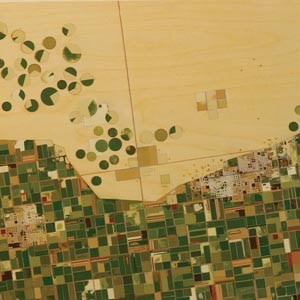 Artist Joe DeRoche is just kind of finding his way in the world. “I can't really explain it — why I stay up all night and just kind of do it,” he says.

DeRoche is a self-taught artist whose obsession to detail is on a level close to the pixel. In his solo show, “New Work by Joe DeRoche,” at Eric Schindler's West Broad gallery, he produces maplike paintings that reveal a possible future built from his own satellite perspective and a life lived on the plains of Nebraska. “It is just sort of an assemblage of scenarios we face now or could face,” he says.

DeRoche's work is a methodical modern landscape. Working with field imagery, emptied makeup cases, resin, wood panels and paint, he creates what already seems true. The works are an aerial blueprint for the life cycle of the land and the reclaimed designs made by unseen humans.

“They are not real places,” he says of his created world. “When I really started doing this, the goal was to just kind of obliterate anything indigenous. I really wanted to cut up and make reference to the landscape and leave behind a little bit of a forest or uninhabited land, but the predominant feeling was really centered on altering the landscape.”

The view is very familiar even though the viewer would have no clue where it is. There's a familiarity to the pattern; for some reason in our time human beings have an aerial perspective of the earth and no longer just see it from the road. DeRoche's compartmentalizing of the landscape creates a marking of space where there's no longer a natural plan of events.

“I think I kind of exaggerate the overuse of land or the lack of anything indigenous left in so many portions of our country in general. Anything that can be harvested or irrigated — any plot of land is cut up and fertilized,” he says of the paintings and the grand view of the world portrayed. “They are pretty I think but at the same time, at least on this scale, there is really very little left.” S

“New Work by Joe DeRoche” will be on display at Eric Schindler's satellite gallery at 8 W. Broad St., starting June 4. Call 644-5005 for information.