Landlord to Live in His Own Slum

The new digs of notorious city slumlord Oliver Lawrence will be a far cry from the comforts of his $1.7M mansion in Hanover. 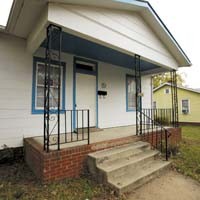 The new digs of notorious city slumlord Oliver Lawrence will be a far cry from the comforts of his $1.7 million mansion in Hanover County. The barely maintained bungalow at 1429 N. 19th St. was, until last week, frequented by drug users and vagrants, city officials say.

The sentence, imposed Monday by General District Judge Phillip L. Hairston, is a first for Richmond, and though it's one that was agreed to by city prosecutors, some critics say Lawrence is getting off easily so that the city can make a point.

Lawrence, who'd been convicted of more than 180 property violations, appeared Monday in Richmond District Court dressed for the slums. A ratty dark-blue track suit hung loosely from his lumbering, disheveled frame. He towered over court officers and attorneys as the judge considered an agreement worked out between prosecutors and Lawrence's lawyers.

The agreement allows Lawrence to split his 70-day sentence between the city jail and one of his derelict properties, where he'll be forced to live in the same squalor to which he's subjected some of his tenants.

“Here's the problem: People routinely go to jail having demonstrated far more regard for the authority of the courts that Lawrence ever had,” Richmond Commonwealth's Attorney Michael Herring says. Lawrence's case was prosecuted by the City Attorney's Office, not Herring's. “He's going to be a lot better off than a whole lot of people down at the jail who have been less flagrant than he has in their disregard for the laws.”

A defense lawyer unconnected with the case made a point of cornering reporters to express his dissatisfaction with the sentence, suggesting that Lawrence is getting special treatment: “If you're not in jail, it's not jail.”

Assistant City Attorney Greg Lukanuski told Hairston that sentencing Lawrence to his own slum serves more than poetic justice: “What I do know is we have turned a property that is not habitable into one that is.”

The unusual sentence — forcing an owner to endure blighted property — is a first for the city, Lukanuski says.

Though Lawrence will have free run of the property (state code does not appear to prohibit comings and goings of visitors), he will spend 30 days in the city jail and must pay fines of more than $175,000.