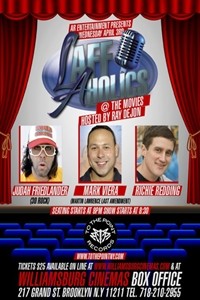 On the evening of April 3rd, 2013 Abner "A.R." Rivera of AR Entertainment and Ray DeJon of Laffaholics and Stand-Up Comedy @ The Movies will be presenting a night of comedy at Brooklyn's Williamsburg Cinemas. Located in the heart of one of the hippest and most culturally influential neighborhoods in the country; this event will be the first of its kind for the newly built state of the art multiplex. Headlining the festivities will be actor and comedian Judah Friedlander, best known for his role as writer Frank Rossitano on the Emmy award winning NBC sitcom "30 Rock", and Bronx-born comic Mark Viera a featured performer on the critically acclaimed cable network show "Martin Lawrence Presents 1st Amendment Stand-Up".

Sorry there are no upcoming showtimes for Laff Aholics