Ladies of the Loin

Women are at the helm of Belmont Butchery, and they only stock products they love. 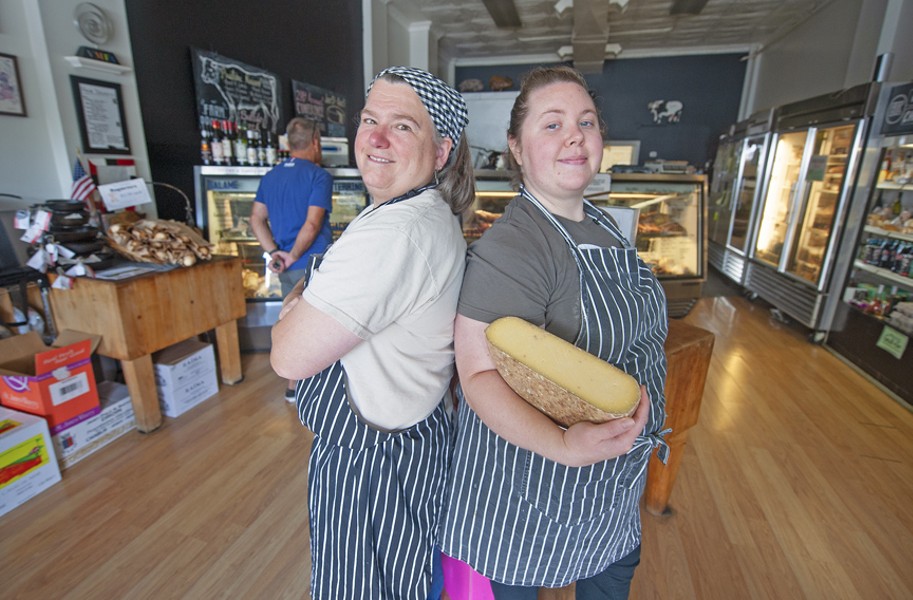 Half a dozen employees in white aprons whisk unwieldy slabs of raw meat across the small shop as the bouncy beats of Modest Mouse play in the background. Before I can fully take in the ambience of Belmont Butchery, owner Tanya Cauthen greets me and begins to answer all the questions I didn't yet know I had.

In the Museum District, Belmont Butchery has offered hand-cut meats and sliced-to-order charcuterie, plus house-made bacon, pâtés and sausages for nearly 13 years. And beyond the meat, the small storefront functions as a gourmand's minimart, featuring a vast selection of wines, cheeses, condiments and other items to nosh and nibble on.

Whether she's sharing product origins or giving customers a lesson from Meats 101, Cauthen doesn't just explain Belmont's selection, she narrates the history of the butchery's products as if they were her children.

"At the end of the day it's all about carrying the stuff that we like," Cauthen says. "Why carry things you yourself don't want to eat?"

Customers' willingness to explore has allowed Belmont to become the first retail location for local small batch, artisanal brands such as KimKim Korean Hot Sauce, Olli Salumeria and Jerk Central's Jamaican seasonings and rubs. At times, Cauthen's dedication to local delicacies has turned the butchery into something of an incubator. The first six months after launching the business, Jerk Central prepared, packaged and sold all of its goods via Belmont's storefront.

"The moment you can buy one of these products at the grocery store we don't carry it anymore," adds Cauthen with a clear tone of pride.

All but one of Belmont's staff are former chefs, bringing a depth of knowledge that you won't find in your average grocery store. Daunted by the wide variety of specialty cuts and gourmet goods, many customers reach the counter wide-eyed and uncertain how or what to order. The experts behind the counter function like meat bartenders: Customers tell them what they're thinking and staffers help them balance preferences on pairings, cost and place of origin in order to choose the perfect cut.

Beyond assisting customers with purchases, Belmont's staff also offers recipe ideas and suggestions for meal planning.
"Not only are most of us chefs, we also cook all these products at home," Cauthen explains. "We're always giving out recipes and writing them on butcher paper. We just share what we want to eat when we talk food."

For those not in the know, the realm of rump steaks and ribs can prove to be full of bravado and machismo, as few things in history are considered more manly than a large slab of raw meat. But according to Cauthen, many loyal customers attribute the accessible approach of Belmont Butchery to the fact that it is a business owned and led by a woman.

Cauthen studied engineering before working in Switzerland as a traveling handywoman, so when it comes to navigating a male-dominated field, this isn't her first ride. In the 13 years she's owned Belmont Butchery, she's grown used to customers approaching the biggest, oldest male in the shop — usually her husband — to ask for assistance. She smirks as she recalls the look of surprise, and sometimes embarrassment, that can wash over a customer's face when her husband or another male employee directs them to Belmont's master butcher.

Molly Ellis, the shop's resident cheesemonger, knows the feeling. As one of only two other women who work the counter, she knows what it's like to have her expertise questioned. Despite what some customers may assume based on her small stature, youthful face and demure professionalism, Ellis has spent years working in restaurants, as a cheese distributor in Northern Virginia and now as one of Richmond's top curd connoisseurs at Belmont Butchery.

A few years ago when nearly the whole staff was female, Ellis recalls people were often surprised by the lack of testosterone. Far from letting the micro-aggressions of unconscious sexism bother her, Ellis simply found it amusing.

What may seem like a random assortment of dairy to the untrained eye often holds a hidden message for customers. Last month, Ellis stocked Belmont's cheese case with varieties from across the East Coast to honor her favorites ahead of the 2019 conference of the American Cheese Society, which came to Richmond last week. Events included a cheese crawl, book signings, taste tests, regional farm tours and even a Cheeseletes 5K. Ellis could barely contain her elation about the smorgasbord of cheese coming to her doorstep.

For those who missed the conference, Belmont Butchery is the next best thing. As with the top-notch meats, Ellis is happy to guide customers trying to balance origin, quality and price to find the right item for them. Much like her boss, she takes pride in her products and hopes to pass that same passion for fine food on to her customers.

"If I wouldn't have it in my fridge, then it's not gonna be on our shelves."