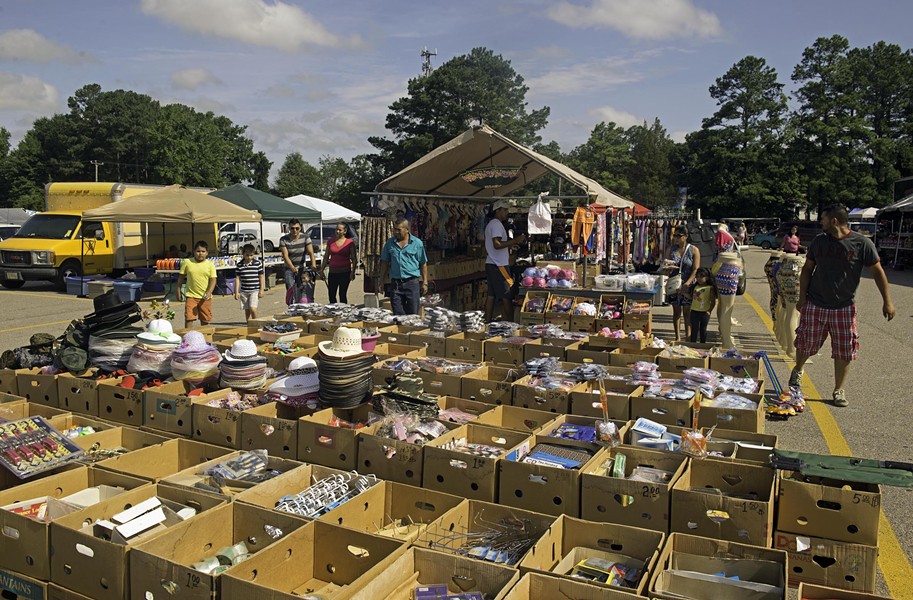 Boots embroidered with crosses and wings. Boots zebra-striped in violet or shining with green crocodile. Boots with gold, 50-peso coins embedded in the instep.

These gleaming boots are the hope of the Rodriguez family. For 11 years, three generations have sold them every weekend at Bellwood Flea Market. It's about getting the family to a better place, says grandfather Jose Luz Rodriguez, who came to the United States from Mexico decades ago to work in a concrete factory in Petersburg. It's about a better future for his twin grandsons. Has it worked?

The boots are made by hand in León, Guanajuato, Mexico, and bought on consignment from the manufacturer. The faster the family can sell them, the more money it earns. "La mas cara es la de pitón," Gloria Rodriguez says, translated: The most expensive are python. Others are made from deer hides or alligator. The soles are smooth, compacted leather, never plastic. Long, pointed toes are for dancing; square toes are for work. They cost $200, but in a store they might go for $450, she says. "Es lo mejor de la pulga" — they're the best at the flea market.

Other vendors might disagree, but that doesn't matter. Succeeding at Bellwood is all about staking your claim and showing up. "Todos los fines de semana," Rodriguez says. Every weekend. "Haga frío, haga calor, aquí estamos," she says: In the cold, in the heat, they're here. 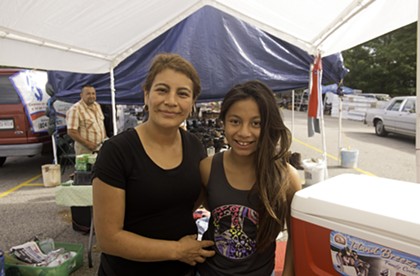 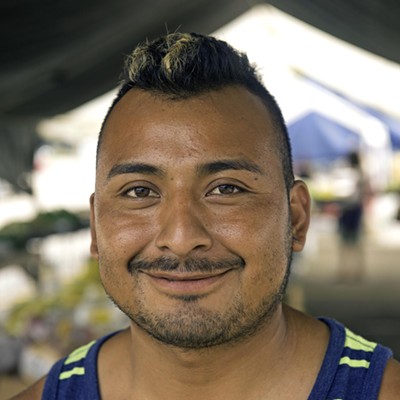 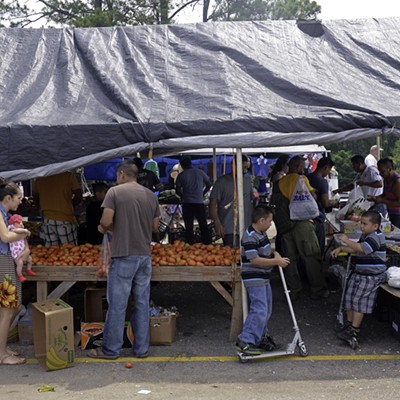 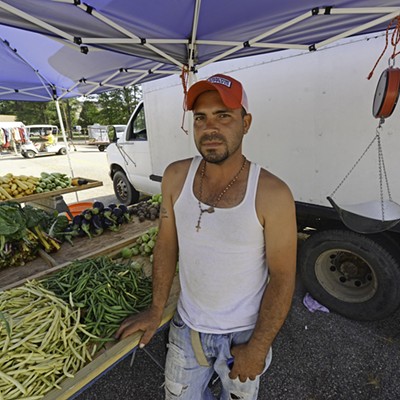 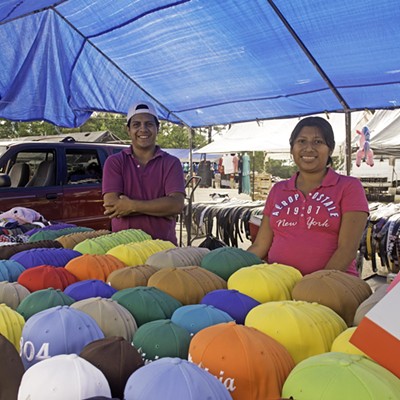 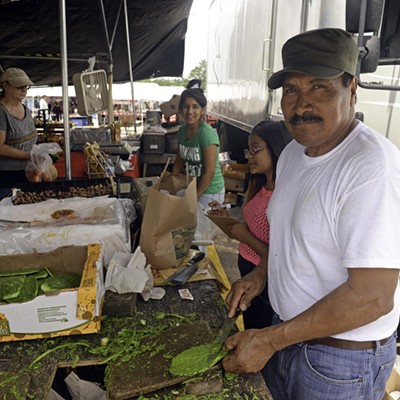 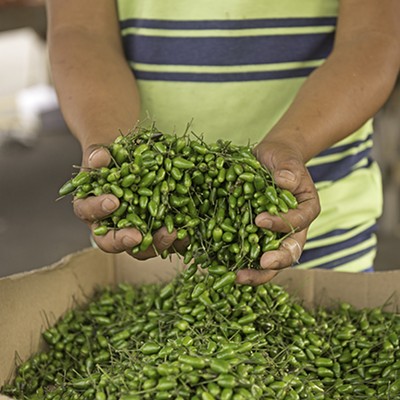 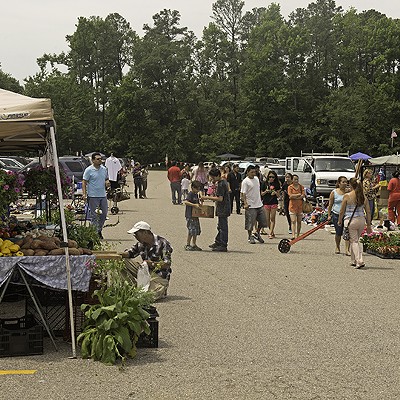 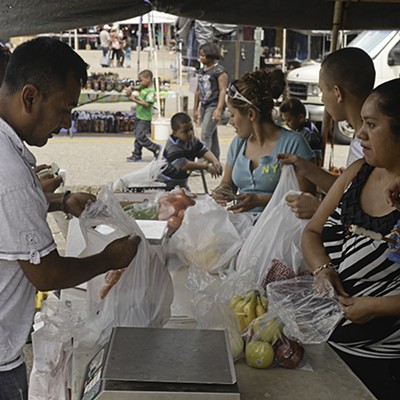 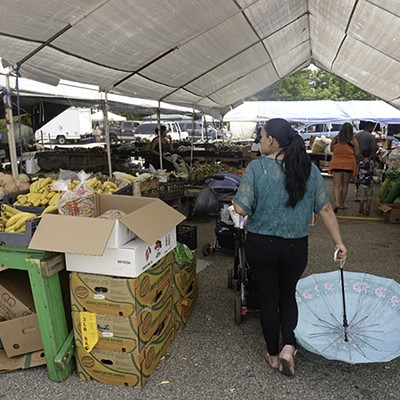 Today's a hot one, even at 9 a.m. The smell of leather rises from the rows of boots up to the green tarp that shades the Rodriguez family's stand. Drifting through the market are the smells of sweat, sun-wilted produce, a smashed melon rotting in the sun.

The patch of cracked asphalt that Bellwood occupies at Jefferson Davis Highway and Willis Road once was a drive-in movie theater. In 1970, it became a flea market as well. By 1986, the theater had closed and the whole property was dedicated to the weekend market.

Every Saturday and Sunday, Bellwood opens at 5:30 a.m. The market doesn't close until late in the afternoon, whenever the last customers leave. For years, the market's main stock was secondhand: rows of red lawnmowers, Elvis plates, Fisher-Price toys, power tools, pocketknives and other treasures.

But within the last 10 years or so, the Hispanic vendors began to show up, some selling junk and others new items. They — and their goods — come from all over: Mexico, Guatemala, Nicaragua, El Salvador, Colombia. Bellwood, especially on Sundays, has become a destination for Hispanic Richmonders looking for specialty produce, stylish clothes or simply a good deal. They call it "La Pulga" — the Flea.

It's been the biggest change the market has seen in recent years, says Belinda Riddle, the market's co-manager. "We really enjoy them," she says of the Hispanic vendors — "and they pay their bills, and they're good customers."

Bellwood mainstay Billy Norwood, 80, has observed the changes from his table near the front. The market, once all the same, now is "everything," he says. "Which is great."

Norwood sells hardware: fishing sinkers, drill bits and doodads in plastic bins with neatly lettered signs. He's been selling at Bellwood "too long. About 40 years now. Just here in the same spot." He just stopped by one day, and "it got me," he says. "The bug got me." 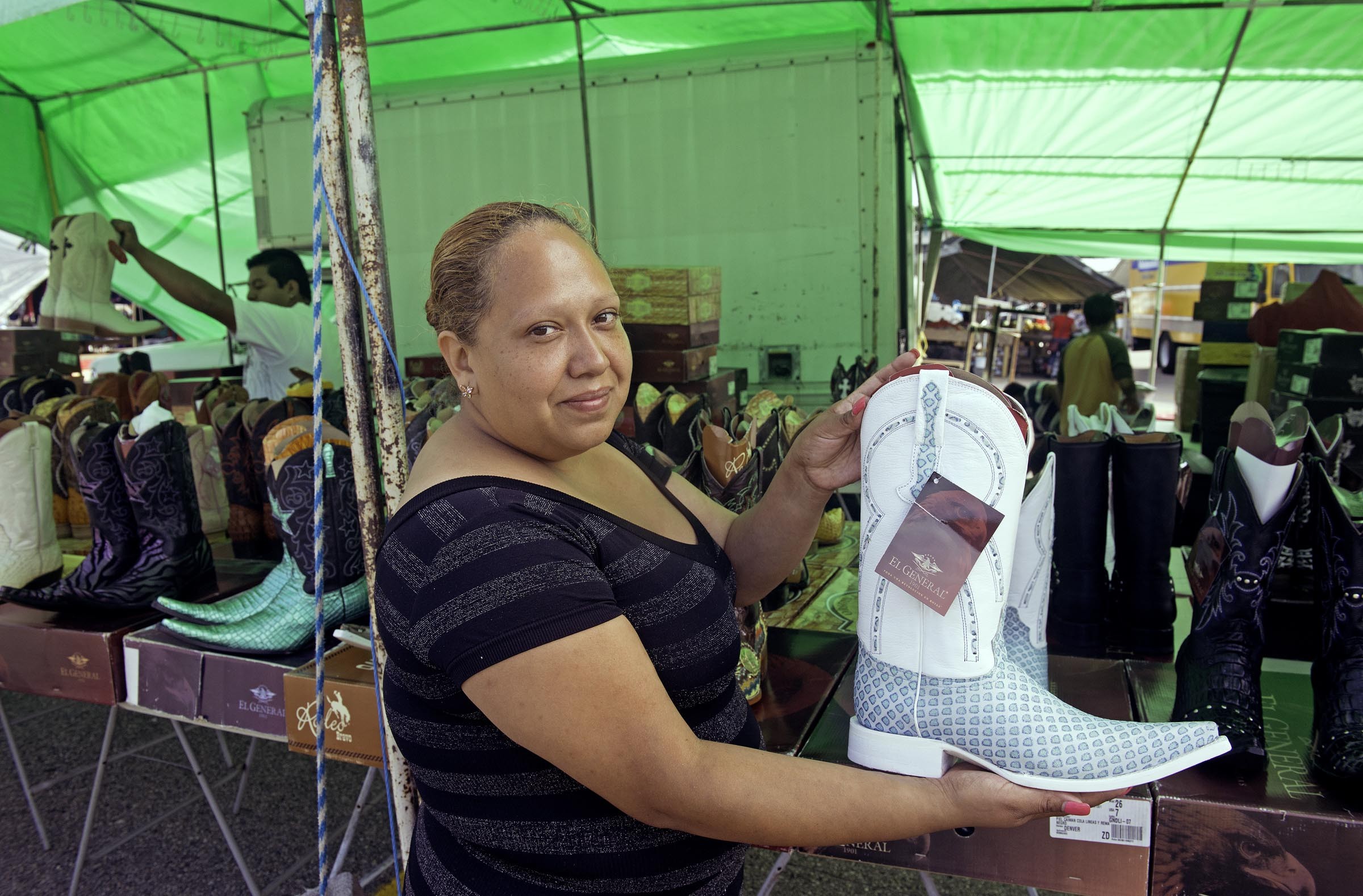 No one's getting rich at Bellwood.

It's a quick way to supplement your income, Riddle says, but it's a constant hustle. Many vendors work full time during the week and yet spend every weekend at La Pulga, trying to earn a little extra cash. Some buy from yard sales Friday and Saturday and then sell their wares at the flea market on Sunday. "If anybody thinks flea market work is a lazy man's work," Riddle says, "they haven't done it."

Hidalia Morales and her husband, Tony Garcia, run a stand to buy their two children clothes and diapers. Their daughter is sprawled asleep in her car seat in the minivan parked in the shade; they're expecting a baby boy in September.

The couple's tables display belts, perfumes, inflatable toys and a rainbow of baseball caps. "804," many say, or "Virginia." Those are popular, she says, but sometimes people don't like Virginia. They prefer a different state.

Nearby, Pilar Mejía sells short shorts, loud leggings and tight dresses, all modeled by headless white mannequins. "Aquí se vende lo que está de moda," she says: Here, we sell what's in style. Her trailer has a mirror affixed to the back wall, to serve as a fitting room. Customers come "por la maravilla que uno les ofrezca," she says — for the marvelousness that we offer.

Guatemalan Wilfredo Gallego specializes in wallets, belts and T-shirts. In a stack of neatly folded black shirts, la Virgen de Guadalupe's mournful face is pressed against a buxom woman posing with a rooster, a horse and a bottle of tequila. "De mis vicios ninguno es vergüenza," the shirt says: Of my vices, not one is shame.

Another shirt is printed with the face of a mustachioed man crowned with machine guns and pot leaves. His name is Jesus Malverde. "Es como un santo," Gallego says. He's like a saint. "Como la virgen." Like the virgin. Well, sort of.

Ramiro Cortez, a stocky man with a blond-tipped Mohawk, shouts out prices on vegetables over the insistent beat of cumbia. Cortez works for a business in Raleigh, N.C., which imports produce directly from Mexico. In addition to selling directly to restaurants, he carries his wares to eight different markets each week. He drives all night to make it to Bellwood — a long journey, but his produce sells here. His tables hold tiny piquín peppers, nopales and El Milagro brand tortillas. Shopper Sandra Diaz says she comes to find fresh herbs and vegetables she knows from her native El Salvador.

Most Bellwood vendors import their produce, but not Maro Godinez. He grows everything he sells — hot peppers, tomatillos, tiny cabbages and flamboyantly flowering elephant garlic — on his 10-acre farm in Montross in the Northern Neck. Wearing a white tank top, a red Tractor Supply Co. cap and a rosary, he sits on a stack of upturned plastic baskets and waits for the customers to come.

After harvesting his vegetables, he takes them to markets in Woodbridge, Manassas and Maryland to sell. Bellwood isn't the best market, Godinez says: "Right here ain't no money," he says. "It's a little bit. People don't want to spend right here." He's competing with the established vendors, who sell imported produce for cheap. Still, it's "better to make something than to throw this away," he says.

"This evening, I've got to go back to the field, and I pick everything again," he says. "Put it in my truck. Come back tomorrow." S

Interpreter Dustin King, a community organizer in the Hispanic community and for the nonprofit Richmond Conexiones, assisted with this story. Any errors in translation are the reporter's.