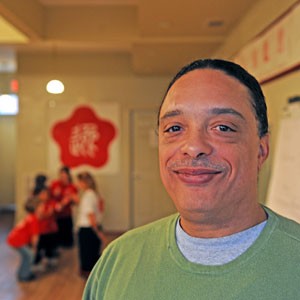 Ving Tsun Kung Fu traveled a long way to get to Richmond. Expatriates from China's provinces brought it to Hong Kong after the Communist revolution. It leapt to the United States as Chinese disciples immigrated west, where it was later taught to an entire generation of young Americans.

Anthony Dandridge was one of those. Now, nearly 25 years after opening one of the first Ving Tsun — better known on these shores as Wing Chun — Kung Fu academies in the city, grandmaster “Moy Tung” Dandridge says the Richmond Ving Tsun Kung Fu School is ready to expand again.

Inside the school's Fan headquarters, in a spare but warm series of rooms, Dandridge and his sifus — instructors training under the grandmaster — teach dozens of students each week the intricacies of one of the world's oldest fighting techniques.

“What we want is to keep the art alive,” Dandridge says. The school thrives, he says, because people realize soon after beginning training that Ving Tsun is more than about becoming a better fighter.

Ving Tsun, he says, “is about the science of fighting, about zones and theories of quadrants and recognizing and reacting to threats in those quadrants instinctually.”

Dandridge, 51, founded the school in 1986 after returning to Richmond after six years of training in New York's Chinatown. The lineage of his kung fu-family is long and storied. He was taught by Ving Tsun grandmaster Moy Yat, who was himself taught by grandmaster Yip Man, the man who instructed Bruce Lee.