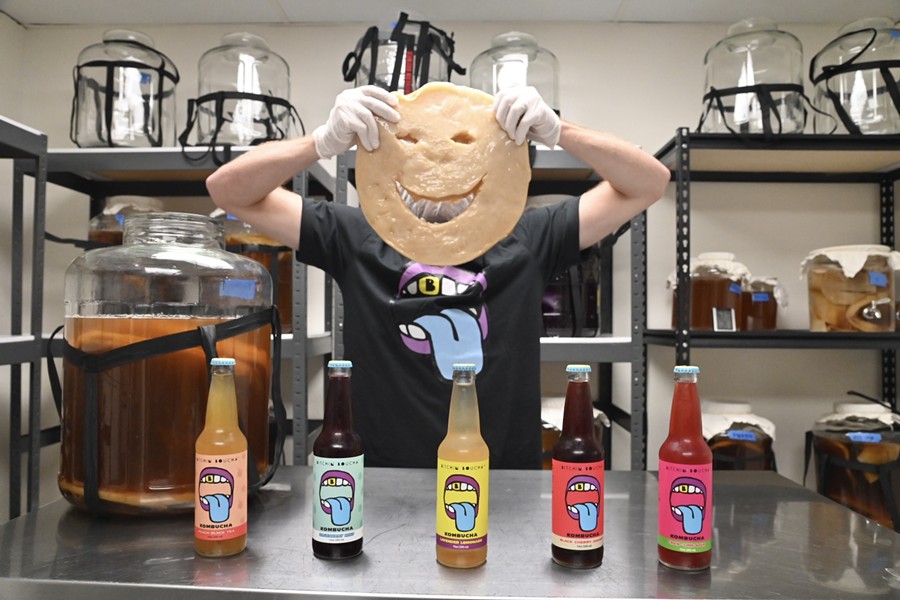 Scott Elmquist Jason Smith, founder of Bitchin' Boucha, says that “you don’t have to wear yoga pants to drink kombucha. You don’t need to feel like you’re drinking a bottle of vinegar to get all those probiotics and healthy benefits. "

As a kid, Jason Smith used to mix different sodas and Kool-Aids to create new flavors of drinks. As an adult, he considers his old favorites “liquid sugar poison.” Instead, he founded Bitchin’ Boucha, a local kombucha bottler churning out carbonated beverages so delicious you’ll almost forget how good they are for your body.

Eight years ago while on a cleanse from alcohol and processed sugar, Smith had his first sip of kombucha. Although he appreciated the lightly fermented flavor of the tea, he couldn’t help but feel like he could make it better. Although Bitchin’ Boucha just moved into a professional production facility off of Staples Mill last year, Smith has been finessing his handful of fresh kombucha flavors for the last seven years.

If you’ve ever bought a bottle of kombucha and found it barely imbibable due to its acerbic acidity, then Bitchin’ Boucha may be the antidote to your antipathy towards kombucha.

“Other kombuchas can be too vinegary because most of the ones in stores are bottled and unpalatable,” explains Smith. “Shipping and refrigerating it for too long can kill the flavor because the kombucha is a living thing. Some companies even pasteurize it so it can’t ferment even more, and it kills all the live organisms which defeats the purpose. I make kombucha for people who don’t like kombucha. I want to show people that it can taste good.”

The name of Smith’s company even owes itself to his product’s powerful flavors. After the first taste of one of his homemade batches, the kombucha brewer couldn’t help but describe his concoction as “bitchin’” — an adjective derived from 1950s surfer culture that translates to “extremely excellent.”

Although Smith markets his kombucha as a healthy alternative to alcohol and sugary sodas, he knows few folks would purchase his products if they didn’t actually taste good. One reason Bitchin’ Boucha beverages pack a punch is because Smith only uses certified organic ingredients in his handful of flavors. Additionally, none of his new flavor ideas make it to market if they don’t pass a taste test with his own kids.

The first flavor Bitchin’ Boucha ever sold is the Black Cherry Ginger that shines a deep vermillion in its clear glass bottle. The biggest seller of the summer was Smith’s Lavender Lemonade which he prides himself on not tasting overly floral.

For those who love a gose beer, the Cran Lime Sour is your closest equivalent. Smith got into the tartness of kombucha via the gateway of sour beers, and this is his top recommendation for those who want their kombucha to serve as an alcohol replacement.

Every few months, Bitchin’ Boucha debuts a new seasonal flavor. Those that prove popular often become permanent additions. Last spring, Smith rolled out Blueberry Mint — his kids favorite and “one of the most unique flavors we make.” Thanks to popular demand it’s here to stay.

Just last Friday Bitchin’ Boucha unveiled Peach Black Tea, the latest seasonal flavor that Smith claims is “a lot milder and smoother than [his] typical flavors which punch you in the face.” Whether his brother’s recommendation sticks around will depend upon how well it sells.

Samples of the next seasonal flavor, Blood Orange Basil, sold out within an hour at the RVA Street Art Festival this month. From flavor creation to Food and Drug Administration approval and bottling that typically takes two months, Blood Orange Basil should be available by the end of the year.

No matter which flavor you choose, the visual is almost as good as the taste. “All our Bitchin’ Boucha bottles are clear because I want our kombucha to pop and look pretty,” Smith says. “I want all our products to look gorgeous so I always start with what color I want the new flavor to be before I get to mixing.” 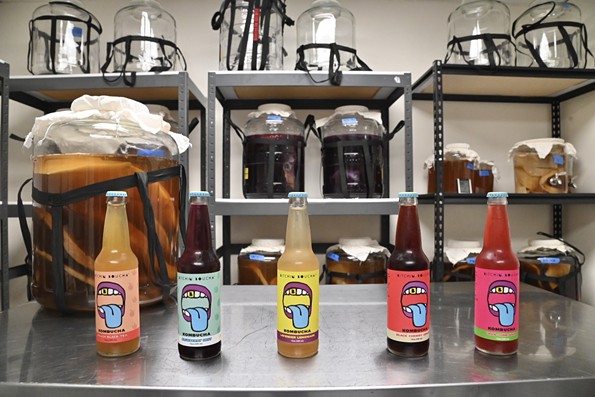 Currently, Bitchin’ Boucha produces 15-20 kegs a week worth of kombucha for distribution around town. Ellwood’s, Stella’s, Outpost, and Hardywood all stock Smith’s products as just a handful of the 13 locations where you can grab a bottle of Bitchin’ Boucha.

With his first employee starting next month, Smith hopes production will soon kick into overdrive so that he can sell his kombucha in a chain grocery store by the start of 2023. A new team member may even make it possible for him to finally open up his production site for tastings, long a goal of his to help spread the gospel of kombucha.

“It’s been a wild ride doing every single part of the brewing, bottling, labeling, kegging, and sales by myself for a long time,” he admits.

Bitchin’ Boucha may even branch out into other beverages one day. Until Smith reveals what new product may be behind such hints, he will keep proselytizing Richmonders on the fantastic flavors and healthful effects of kombucha consumption.

“You don’t have to wear yoga pants to drink kombucha,” he says. “You don’t need to feel like you’re drinking a bottle of vinegar to get all those probiotics and healthy benefits. Kombucha isn’t just for crunchy granola people; it’s something that can just be enjoyed.”