Scott Elmquist Nicole Pries and Lindsey Oliver exchange vows outside the court house in Richmond on Monday four hours after the Supreme Court ruled it would not intervene in a lower court's decision to overturn the state's gay marriage ban.

On Monday, the third anniversary of the couple’s commitment ceremony, Nicole Pries and Lindsey Oliver received a text message from a friend: The Supreme Court wasn’t going to hear an appeal of a lower-court’s decision to overturn the state’s gay marriage ban. The state attorney general had advised Virginia court clerks that they could begin issuing marriage licenses to same-sex couples at 1 p.m. 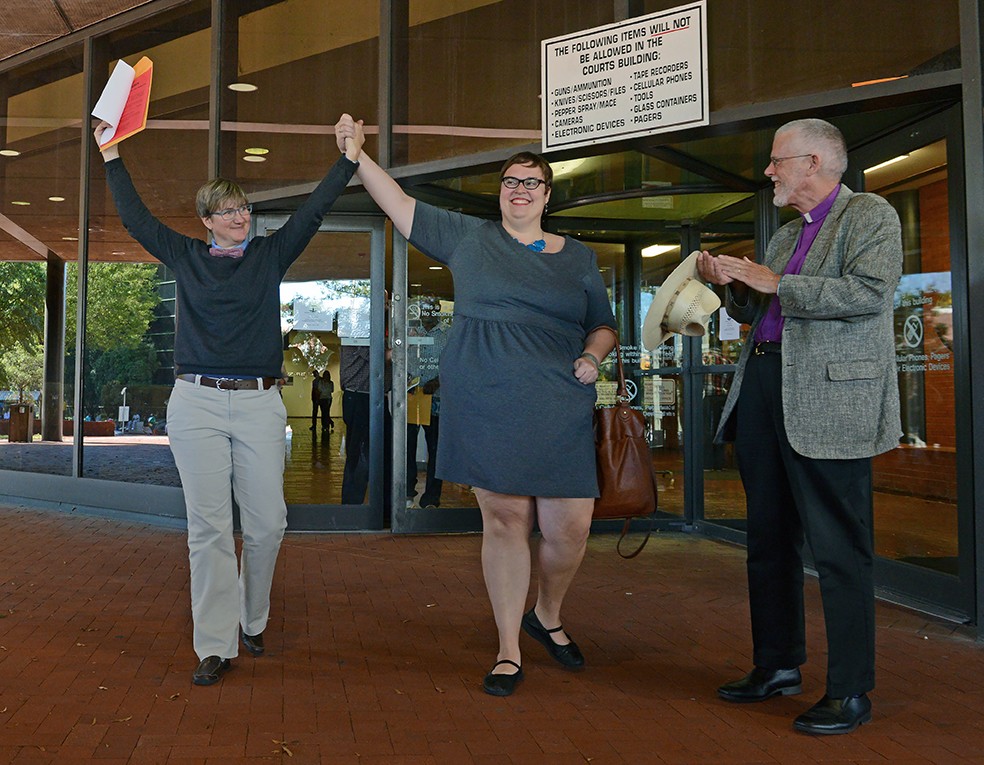 Pries, an assistant professor at Virginia Commonwealth University, and Oliver, an employee at the National Network of Abortion Funds, rushed to the Richmond Circuit Court to beat the lines of same-sex couples they assumed would form. They ended up becoming the first gay couple to be married in the city, exchanging vows in the bright sunshine outside the courthouse, surrounded by dozens of cameras and cheering supporters.

Pries and Oliver said the moment was more symbolic than anything else. They’d already held their commitment ceremony before friends and family members -- the closest thing to a marriage they could pull off in Virginia. Asked what they were looking forward to about making their marriage official in the eyes of the state, Oliver was blunt: “You mean what rights are we looking forward to?” For them, the biggest immediate advantage a state-sanctioned marriage will provide has to do with how they’ll both be seen as legal guardians to their children when they have them.

“There are couples that have been looking forward to this for decades,” Pries said. “Being the first we kind of carry them along with us.”

Before they left the courthouse to a throng of reporters and cameras in front of whom they’d marry, Pries and Oliver waited for half an hour while the clock in the clerk’s office slowly ticked toward 1 p.m. The couple sat at a table with two Styrofoam cups of water, two $20 bills and a photocopied list of licensed wedding officiants.

At six minutes to 1, Circuit Court Clerk Ed Jewett came in and offered to type up the applications. With three minutes till 1, the Rev. Robin H. Gorsline, a marriage equality activist, appeared and offered to perform the service. Pries and Oliver accepted.

A conversation among the three continued until 1:01, when a reporter from the Associated Press noted that Jewett could legally issue the marriage license. Ten minutes and two corrected forms later -- the first misspelled Oliver’s name and Oliver signed the wrong line on the second -- the license was official.

“It is issued,” Jewett declared.

“That will be $35,” added his assistant, Jennifer Garcia.


Correction: An earlier version of this article said Pries and Oliver have children. They do not.