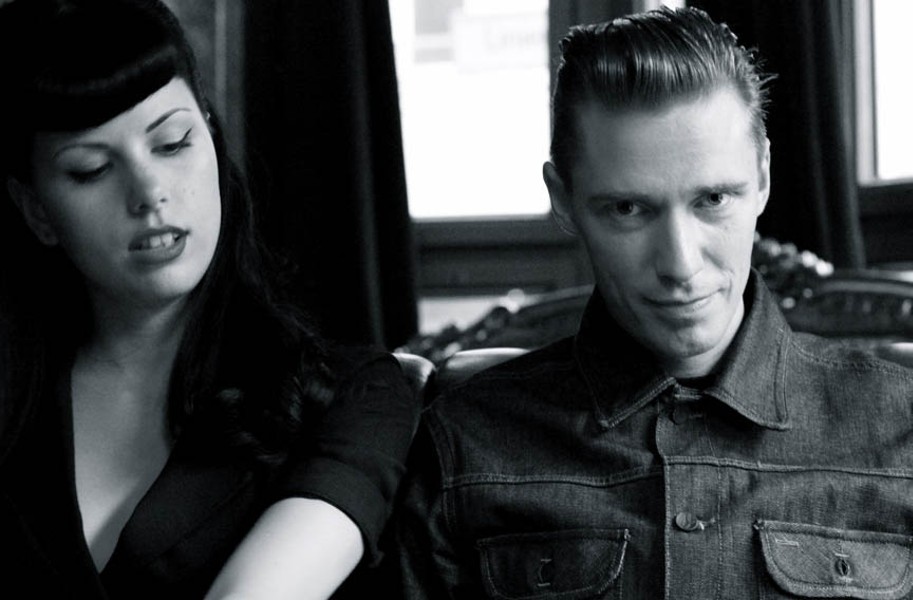 Nine years ago some kindly public-relations person sent me a copy of the Messer Chups album “Crazy Price” on Ipecac Records.

In a sea of copycats, the album grabbed my attention. There seemed to be so much cool kitsch jammed into this trippy instrumental album, I was grasping more than usual when I wrote the review for Style:

“Sci-fi music with heavy doses of surf and rockabilly … like a Tarantino-culled soundtrack for a ’60s Italian vampire flick or a Tipsy-scored Martian movie. … Songs with names such as ‘Satan Jeans’ and ‘Monkey Safari’ make this a great background album for conjuring that crazy voodoo biker/Pat Robertson mood.”

My reference to the evangelical Robertson remains unclear. But the more I listened to the group’s catalog, the more impressed I was to discover a St. Petersburg, Russia, trio — which arose from the ashes of Messer fur Frau Mueller, a self-described “industrial psycho-hardcore act” — with a killer update on American surf music far more kaleidoscopic and interesting than anything I’d heard out of the States.

I recall waiting for them to tour here … and waiting.

Now a decade later, after sadly typical visa problems, they’re here. The trio features the excellent Oleg Gitarkin on “guitar, horror-laugh and video,” Svetlana Nagaeva or Zombierella on “bass, vocals and screaming” and Bisfer on drums.

The band preferred to be interviewed in Russian, so I e-mailed some questions to a Richmonder now living in Moscow, Kevin McNeer, who translated Gitarkin’s answers.

Style: This is your first real American tour — did you have any visa problems this time?

Gitarkin: Yes. We were refused twice before when we applied for tourist visas. So this time we did everything strictly by the book, went through lawyers with an official petition for work visas, since we’re giving concerts. This all cost about $2,000.

How did you initially get into rockabilly and surf music?

I’ve always liked these styles of music but only started playing surf about 10 years ago. Since I can’t sing, I really enjoy playing instrumental music. But what I’m most drawn to is the retro sound of the ’50s and ’60s. … I heard it when I was little, don’t remember where, and immediately understood I was going to be a musician. But I thought I’d be a drummer because I was afraid I wouldn’t be able to master the guitar. … For a couple of years I played the drums in the school band but later learned the guitar because I didn’t like our guitarist.

Who are your biggest influences?

Link Wray, the Ventures and so forth. We listen to lots of music but still mainly retro. I love Hawaiian music and play steel guitar and am actually preparing a Hawaiian album.

Do you see your group as expanding the form?

We aren’t aspiring to bring in anything new especially. On the contrary, we dig around in the old stuff, and I’m interested in rediscovering what there was earlier — which is a huge inspiration to me, since back then music was more interesting and melodic and almost unbearably magical. It’s simply wizardry from the past that’s outside of time, and that’s what I’m interested in.

Tell us about your video nods to Soviet and Eastern European cinema, music and animation. What are some of your favorites?

There are a couple of Soviet sci-fi films like “Planet of the Storms,” “The Mystery of the Two Oceans,” and I’m also fond of children’s films from the ’60s about the sea — “The Girl and the Echo,” “Dubravka” (a coming-of-age story about a girl on the shores of the Black Sea). … Oh, and there’s a comedy about a robot called “The Rainbow Formula.”

The darling of B-horror flicks, Edgar Allan Poe, grew up in Richmond. Did Poe’s spirit influence you in any way to come here?

No, I didn’t know that, but we are crazy about Edgar Poe, especially the screen versions of his works with Vincent Price, our favorite actor. … I had a Gwar video-cassette as a teenager with a bizarre film that I liked. I definitely know that group. They help me to remember my childhood, from when I used to watch them. Didn’t know they were from Richmond.

The horror genre was never so big in the Soviet Union — do you use clips from Soviet horror films?

No, we don’t reference many horror films from Russia. The most important Russian horror movie was “Vii” (also called “Spirit of Evil” and based on a short story by Nikolai Gogol, basically a Russian Poe) with Kuravlyev [lead actor]. We love horror films and have a large collection — at our concerts we project video cuts from our favorite movies. They’re too numerous to list, but it’s mainly retro and not only American.

How is your music received in your home city of St. Petersburg?

We also have fans in Peter (a nickname for St. Petersburg), but on the whole Russia doesn’t have a big rock ’n’ roll scene. That’s not important to us though because we play more often in Europe.

Finally, what does the name Messer Chups mean?

“Messer” in German means “knife,” and “chups” is from the “Chupa Chups” lollipop (popular in Russia), i.e., “to suck.” So it works out to be “Knife Lollipop” or “Knife Suck.” Something like that, anyway. S