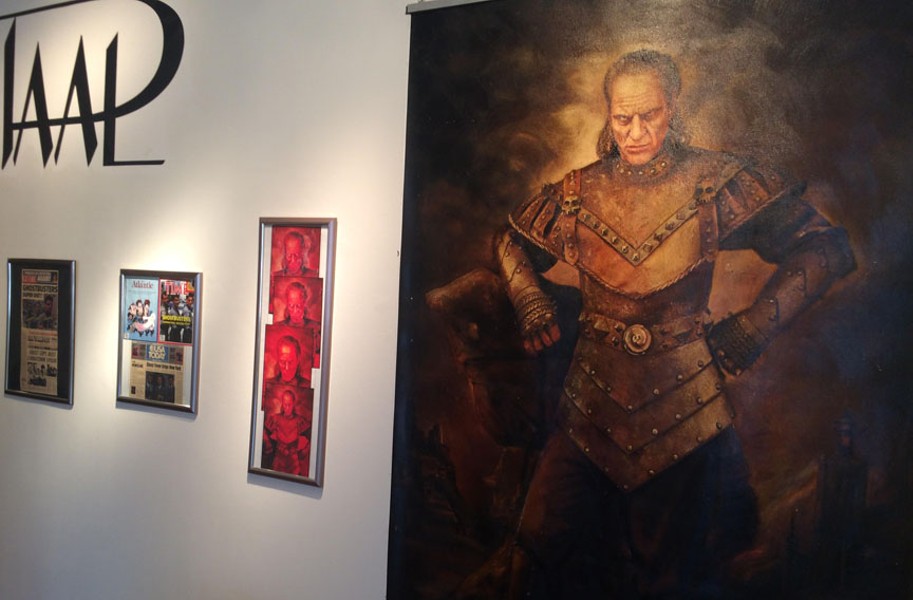 Vigo the Carpathian is an ancient tyrant who should be familiar to fans of “Ghostbusters II.”

It’s a long way from Okinawa to Petersburg, but that’s where you’ll now find the three swords — the Bride’s, Budd’s and the demon sword — from Quentin Tarantino’s “Kill Bill.”

Culled from Petersburg resident Eddie Woodmancy’s costume and prop collection, a new exhibit, “Lights, Camera, Action: 20 Years of Collecting Movie Memorabilia” at the Petersburg Area Arts League, allows visitors to indulge their inner film geeks. Curated from a fan’s viewpoint, the show is wide-ranging, with objects as varied as the cursed Aztec gold coins from “Pirates of the Caribbean,” the antidote vial from “Indiana Jones and the Temple of Doom” and a can of Alpha Chino’s Booty Sweat energy drink from “Tropic Thunder.”

It’s a golden opportunity, in other words, to ogle a rebel fleet trooper’s helmet and blaster before “Star Wars: the Last Jedi” lands in our galaxy come December.

It was “Star Wars” that first got Woodmancy into collecting movie memorabilia, but his interest continued as films were shot in Petersburg, such as the current “Juanita,” with Blair Underwood and Alfre Woodard. Visitors to the Petersburg Area Arts League will see several of the movie’s sets nearby.

“I’ve been collecting for more than 20 years at least,” Woodmancy says. “But not as much as I used to do, because I ran out of room to display it all.” The exhibit contains more than a hundred items, with almost the same number at home due to lack of space. Posters and print clippings provide context for the objects.

Some items, such as an original series costume from “Battlestar Galactica,” were actually used on screen, while others are exact replicas. “All of the props I’ve re-created are completely screen-accurate,” he says. “Some are better constructed than the film originals.”

Those originals were acquired on the countless scouting trips that every collector craves. A display of ID badges demonstrates the level of detail that prop masters create for the sake of authenticity. “Diehard” fans can see John McClane’s badge that bears Bruce Willis’ photo, as well as other screen cops, including Starsky and Hutch, Sonny Crockett of “Miami Vice” and FBI agent Fox Mulder from “The X-Files.”

With the top of the staff Ra from “Raiders of the Lost Ark” acting as a talisman, Wooodmancy’s goal is larger than putting on his full Darth Vader costume — though he’s been known to do that for the Christmas parade — or showing off his collection.

“A big part of this is trying to keep the interest in moviemaking going,” he says. “We want to film movies here in Petersburg.” S