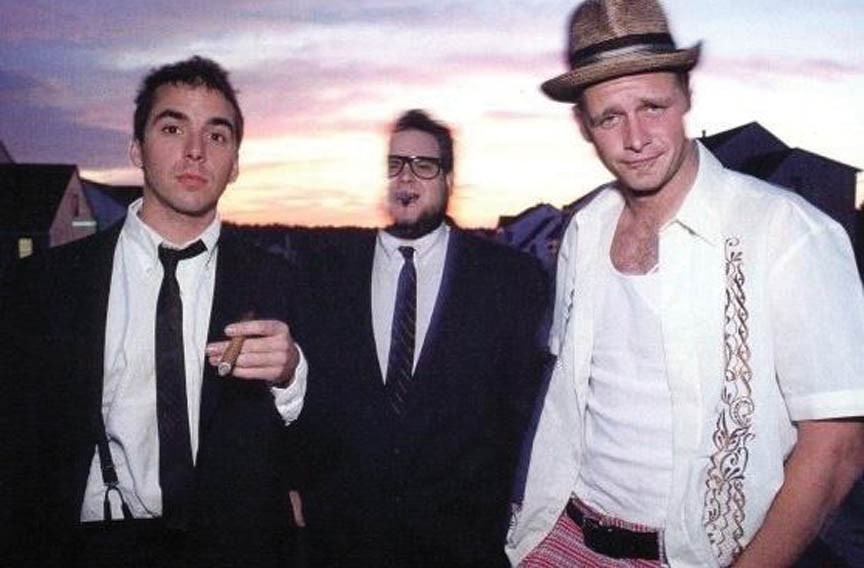 " This is a song about a monkey ... for my dad," Michael Bishop says, before his band launches into a creeping version of "Henry" at the annual Gwar-BQ last fall.

It's one of the best-loved songs from the melodic hard-rock trio known as Kepone, off the group's 1991 debut album, "Ugly Dance."

The September show at the National is the Richmond band's first in 12 years and it kills. With members now in their 40s, the band shows no signs of rust, playing a set of technically demanding songs with many moving parts, vocal harmonies and time changes. Not bad for only eight practices.

That successful reunion gig — and a few other high-profile shows since — has provided sweet vindication for the underrated '90s act that many people think deserved wider recognition. The band has talent to spare, among Bishop (bass and vocals), Tim Harriss (guitar and vocals) and Ed Trask (drums), who ably replaced Seth Harris' memorable playing on the first record. Most important, Kepone had that special something that makes a kick-ass live band, no matter the venue. It could suck the air out of a room.

"I've always thought our live performance was our forte," says Harriss, a slashing rhythm guitarist more than a lead player. "I remember seeing the Bad Brains" — Harriss played with its lead singer, H.R., among many others — "and I wanted to rise to that level. They would melt your eyelids. You felt involved."

With Trask pounding away, the group released two more albums on Quarterstick Records, "Skin" and a third, self-titled release, before breaking up in 1999, as the underground music landscape shifted. During that decade it opened for Public Enemy, released a video ("Knifethrower") on MTV and toured Europe five times.

Each veteran player is indispensable to the band's hard-hitting industrial rock aesthetic, but the group began as the side-project of ex-Gwar veteran Bishop (aka Beefcake the Mighty). A talented bassist with a killer rock scream, he also brought a unique mix of charisma and natural storytelling. You could say it was in his genes.

Bishop grew up in Hopewell, where his grandfather was a founding member of its Church of Christ. Early on, his parents recognized a talent for oratory in their child and steered him toward becoming a preacher — not a bloody space mutant.

"I was a ham," Bishop says. "Once, they were preaching from the book of Jeremiah, hellfire and damnation. The preacher was yelling: 'Who is Jeremiah? Who is Jeremiah?' I stood up and said, 'Jeremiah was a bullfrog!'"

Bishop eventually preached a few sermons, but the more he learned about the religion, the more he ultimately rebelled. "In some ways, that aesthetic of the church — that purity of experience and getting away from fancy stuff — stayed with me as I discovered punk rock ... Being a lonely fat kid I got a lot of time alone [laughs] so I developed my [music] skills."

After playing in some Chesterfield bands, Bishop was handpicked by Dave Brockie to play in Gwar, he says, "mainly because he wanted big guys to put in a suit." After seven insane years on the road, Bishop wanted to branch out musically. The name for his new band came from the infamous Kepone pesticide, dumped into the James River by a Hopewell company, sparking an ecological nightmare.

"You mentioned the Southern gothicism in my lyrics. For me, there's a sense when you read authors like Faulkner, of this unacknowledged history that burbles under polite society," Bishop explains. "That chemical was a metaphor for this place that had such a deeply wounded history, which people still don't acknowledge. I grew up playing in graveyards from the Civil War, basically. ... Later, when I heard 'Kepone Factory' by the Dead Kennedys, I remember thinking, 'This is tailing me.'"

As younger crowds who saw the reunited Kepone open for Lamb of God and Scratch Acid at the 9:30 Club have attested online, the band still sounds tight.

"It's weird for a hard rock band to improvise, but we did it a lot, especially toward the end, both writing and live," Bishop says. "But it's tight, rhythmic improvisation, not hippie bullshit. The songs are constructed to bring that out."

The band is unsure whether it will write new music, but it's pleased by the warm response so far. Harriss says Kepone potentially could release some older recordings, originally put out as 7-inches by a Spanish label. "The liberating thing now is that there's no pressure to do anything but what we want to do with it," Harriss says. "The main thing is for it to be quality."

Trask agrees. "We're not in this to be famous," he says. "We all have full lives now."

Bishop teaches undergraduate courses in American music history and writing at the University of Virginia, as well as having stayed active musically, including recording with Modest Mouse member Tom Peloso, and playing with acclaimed singer and songwriter Sarah White. This month he also finishes his dissertation, an "ethnographic autobiography," he says.

Which brings us back to "Henry."

Soon-to-be-doctor Bishop recently gave an academic talk at the College of William and Mary on the song, which features lyrics inspired by true stories about a pet monkey his family once owned. "There was never enough about the monkey in the stories," Bishop recalls. "It was always about how the men mistreated this animal. He was so out of place. I identified with the monkey. For me, there's a lot of yearning in it."

Kepone will be among the bands performing at Style Weekly's Shadrock Music Festival, April 28 on Brown's Island. Tickets are $35-$100. For tickets and information go to shadrockmusicfest.com.