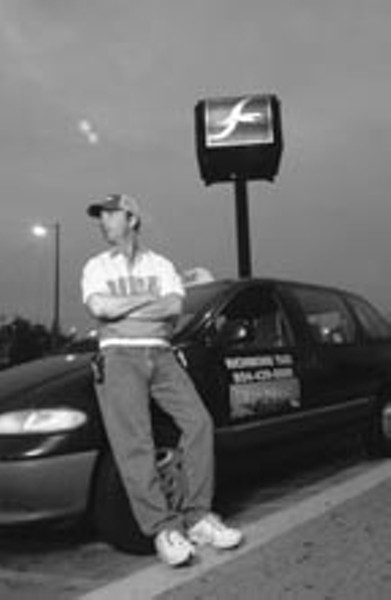 I was in construction 25 years. I was in between jobs, and I just decided I'd drive at night. I didn't like night. It was chaos. Just too much stuff going on. The first nights I worked was a Friday and Saturday night. The first house I went to, a lady and a man was fighting, and they come out swinging. The police pulled up and asked me if I was going to take the lady, and I said no and pulled off. So it just progressed. So two nights of that, on a Friday and Saturday night. I've been working days ever since. …

I like the daytime. A lot of old ladies I meet, and then people in general, you know, all walks of life. People are fairly nice, everybody's nice. I like people. ... Some of them like to talk. So I'll listen. Depends on what's going on in their lives. They might have something going on, having a bad day, they want to just dump on you and then get out. Which is good, cause they don't know you. [Laughs]

Honesty is a hard thing to find in the cab business. So I try to stay real honest. …I grew up here; I was born and raised. West End. Springfield and Broad. It was all country then. All farmland then. It's changed a lot. …

I picked up a guy in Hollywood Cemetery one time at 5 a.m. He was covered with blood on his shirt where he'd been drunk and passed out and had sex with some girl in the cemetery. So I found him, and I had a sheet in the trunk and I laid it so he wouldn't get my seats bloody. He was still incoherent. About two weeks later he called me from the same cemetery. He says, "I don't know how I got here. I bet you think I'm just weird." I said, "Naw, naw." — As told to Melissa Scott Sinclair