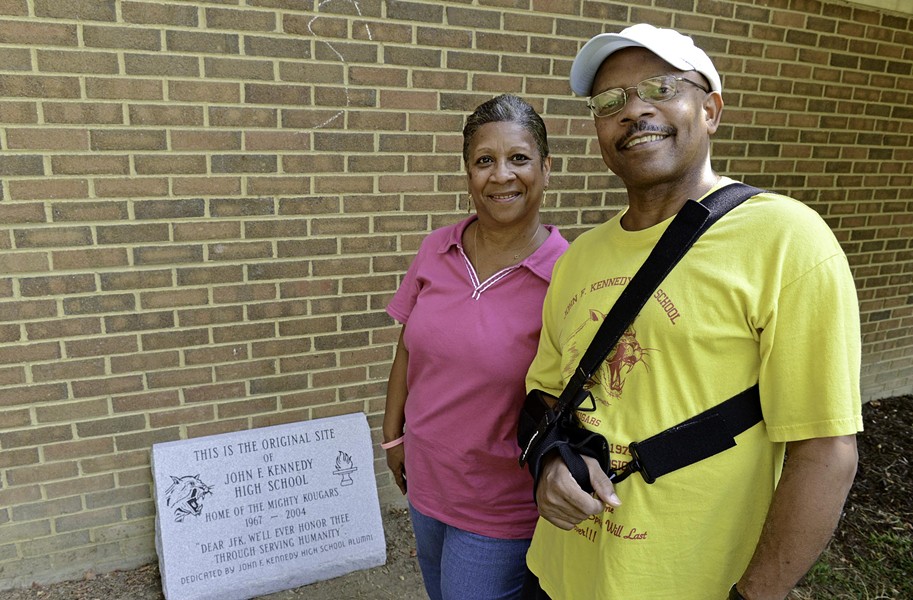 For the last decade, graduates of an East End high school have watched the identity of their alma mater fade away. But they're taking steps to keep its legacy alive.

The Richmond School Board voted to consolidate Armstrong High School into its rival, John F. Kennedy, in 2004 — but keep the name Armstrong.

"Imagine all of a sudden your rival high school was shut down, and your school took their name," says Dennis Mallory, who graduated in 1974.

Mallory, who wants the school to revert to its old name, recalls watching Kennedy grow. "The year Kennedy was built, we were trying to [build] a football team," he says. "Armstrong beat us 66-zip. But we went on to win a football championship."

Last week he and other passionate alumni shared memories while watching a work crew install a granite slab near the school's entrance at 2300 Cool Lane, acknowledging its former identity. The JFK Alumni Reunion Committee raised $1,200 to pay for it.

"They took our school and didn't even say thank you," says Vivian Tyree Coleman, who graduated in '72. "I feel like I'm back home."

Alumni will hold a dedication ceremony Saturday at 3 p.m. — the weekend before the school opens its doors to a new year and its approximately 960 students.

School Board Chairman Don Coleman, a graduate of Armstrong's former building on 31st Street, says he hopes the event will encourage alumni to involve themselves in the district.

"I remember the rivalry, but also the camaraderie of the two East End high schools," he says. "I'm hoping it can be a rejuvenation of people being excited about the East End."