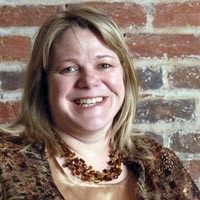 Homelessness is hardly an unsolvable social condition, says Kelly King Horne, the new executive director of Homeward. Horne, who grew up in Chesterfield County and majored in religious studies at Stanford, says she decided to attack homelessness because she "wanted to do something more real -- connect the theory with reality."

She first joined the Peace Corps and eventually Habitat for Humanity International in the former Soviet Union, Romania, Armenia and Northern Ireland. When she returned to the Richmond area in 2003, however, she encountered a complacency she didn't like. She was often told that "Richmond is different than other places," she says. "No, we're not." And, no, "get a job" simply isn't the answer. Seventy percent of the region's homeless were previously incarcerated, making it incredibly difficult for them to find a job.

That's where Horne and Homeward come in. "I think now the planets are aligning," she says, adding that local governments are now joining the discussion. Horne, who is expecting her first child any day now, says some people are beginning to see the light. "It's [more] cost-effective to have someone in housing that's stable than to keep someone on the streets," she says. "The time is right to really take on the next step."