As a panacea to the pandemic, a German hiker tackles all of Virginia’s state parks.

Scott Elmquist Dominik Kulusic, a German graduate student, hiked and cycled all of Virginia’s state parks during the past 12 months (pictured here in Richmond).

By spring 2020, Dominik Kulusic, a 26-year-old German graduate student in human resources management at Rutgers University, was caught in the crosshairs of the pandemic. Classes were remote. The student gym closed. The Big Apple, a nearby lure, was no longer an option. And by February his housemates, fellow German nationals, had trickled away.

So last April the peripatetic Kulusic left New Jersey for Virginia at the urging of friends. Richmond was his old stomping grounds: In 2016, while an undergraduate at the University of Konstanz in southern Germany studying political science and public administration, he spent a semester at the University of Richmond.

But when the strapping, 6-foot, 3-inch vegan realized that pandemic times in the Old Dominion made options as limited as those in the Garden State, he decided that to exercise, get outdoors and safe-distance connect with Richmond pals, he’d start hiking. At Rutgers, hiking and cycling a 29-mile stretch of the Delaware and Raritan Canal State Park Trail that connects the cities of New Brunswick and Trenton – akin to Virginia’s Capital Trail – had been one of his favorite outdoor activities.

Then after hiking five, and then 20, Virginia state parks an idea hit Kulusic: Why not tackle all of Virginia’s 39 state parks, from the Atlantic to the Appalachians? 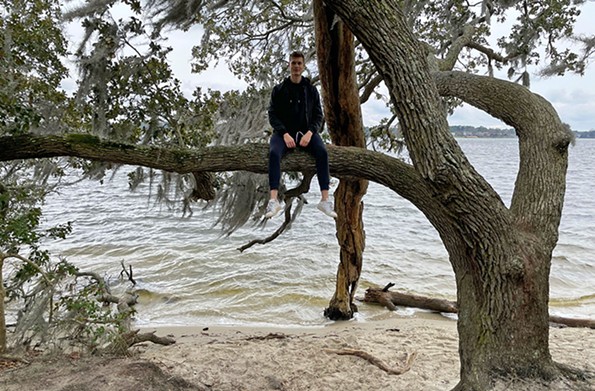 “On a flight, I’d seen a United Airlines magazine ad that promoted state parks in Kansas. It read: ‘Try to visit them all.’ I wondered if it was manageable and made a plan that considered how much time I had in Virginia.”

A chink in the ambitious plan was the reality that Kulusic had neither a bike nor a car. Undeterred, and with determination and enthusiasm in equal parts, he persuaded, cajoled or charmed his friends or roommates to ferry him to close-by state parks like Pocahontas in Chesterfield County, the state’s largest with 8,100 acres, or more often farther-flung parks with such intriguing names as Wilderness Road, Shot Tower, Hungry Mother or a new state park, Clinch River, which completed his impressive circuit.

“It wasn’t only about the parks, it wasn’t all about nature,” Kulusic explained last week by phone from his hometown of Augsburg in the southern province of Bavaria, where he returned last month. He is in semi-lockdown and completing his Rutgers graduate studies. “Some of Virginia’s parks are connected to the Civil War and there are these old coal mining towns. My father, like many Germans, didn’t realize that Virginia has an amazing Atlantic coastline. They know about New York City, Florida and California, but don’t think there’s much else. When I moved to Virginia in 2016 for my semester at Richmond, I realized that the state was the birthplace of the United States but I have learned it has a rich history and an amazing diversity of landscapes. And Richmond itself is a treasure.”

While matriculating in Virginia’s capital city during that semester abroad, Kulusic was one of a handful of international students at the University of Richmond with internships in the Virginia General Assembly. He was assigned to state Sen. George Barker, a Democrat who represents parts of Fairfax and Prince William counties and Alexandria.

But Kulusic isn’t the first visitor from Germany to experience Virginia’s natural environment and governmental interactions. Johann Schopf, a German surgeon and intellectual who took a grand tour of the fledgling nation in 1783 and arrived in Richmond by stagecoach, wrote in his journal: “The falls of the river were the first object of my curiosity. ... A vast number of great and small fragments of rock fill the bed of the river as far as the eye can see and through them the current with foaming uproar makes its way.”

Schopf also visited a state legislative session being held in the temporary capitol on Cary Street in Shockoe Slip: “It sits; but this is not just an expression,” the German wrote, “for these members show themselves in every possible position rather than that of sitting still, with dignity and attention. An assembly of men whose object is the serious and important one of making laws, should at least observe a certain decorum, but independence prevails even here.”

“My favorite class at the University of Richmond was an internship with Senator Barker,” he says. It was through the General Assembly that Kulusic met lobbyist Demas Boudreaux, who works in federal and state relations for the Virginia Housing Authority.

In the summer of 2017, when Boudreaux was out of town for several weeks, he asked Kulusic to housesit at his home in Manchester. Through visits to Boudreaux’s family in western Virginia, Kulusic’s interest was piqued for exploring outlying parts of the state. When Kulusic returned to Richmond a year ago, Boudreaux offered him lodging and dug deep into storage to retrieve and resuscitate a bicycle. He and mutual friends either tag-teamed or piled in together to drive Kulusic to state parks.

“Each trip was different, depending on the park, the weather and the season,” says Kulusic. “New River State Park is just a trail, but a 56-mile trail each way. That was something.” Other park explorations might have included only a brief stay. They seldom included an overnight stay in a park.

“Since Dominik is vegan that can be a challenge, especially in the far rural areas,” says Boudreaux of the limited dining options during the excursions. Although Kulusic often filled up on oatmeal and berries before leaving Richmond, rice and bean tacos at Taco Bell restaurants were the only sure vegan option on the road. “And the farther out you go, even the Taco Bells disappear.”

So what were Kulusic’s thoughts on our best outdoor offerings?

“The beaches are great, the Dismal Swamp is amazing and the rolling hills are what makes Virginia special,’” he says. “But the mountains are what really makes it for Virginia. They are among the oldest mountains in the world. They are very different from the Alps which are about a three-hour drive from my home in Augsburg.”

One of Kulusic’s favorite state parks is False Cape in Virginia Beach, south of Sandbridge. “It is an adventure getting there,” he says. “We parked and then rented bikes. We took a bike path for about 4 miles until it was too sandy and we started walking. It was August and it was hot. You can then walk to the North Carolina state line if you want. It is wonderful, one of the only undeveloped stretches of beach on the East Coast.”

On a future trip to Virginia, Kulusic will find a 40th state park awaiting him. Machicomoco State Park is a 645-acre destination on the York River in Gloucester County that celebrates the state’s native tribes. It was officially opened last week on April 16 – with a remote dedication, of course, and spot-on for Earth Day.

Meanwhile, Kulusic is introducing his family members to hikes near Augsburg. They are game.

“My mother says that she’s lived in Germany most of her life and never been to places we go.”

Back to the Environmental Issue